Colour runs are all the rage at the moment the world over, and La Métropole Nice Côte d’Azur welcomes one of these “happiest 5Ks on earth”.

After the first run in the south of France last October in Aix-en-Provence, the spotlight is now on Saint Laurent du Var, which hosts the first Run’Bow Colors™, to be held in early April. The run promotes fitness and good times in a friendly and non-competitive atmosphere for all participants.

Inspired by India’s Holi festival during which celebrants signify the death of winter and rebirth of spring by throwing coloured powder at each other, the event is a unique 5k that has already taken the U.S. by storm, and is now invading Europe. The first French edition was organized in 2014 in Paris and attracted about 13,000 runners, as well as one in Marseilles five months later.

The race is only intended as pure fun – the goal is not to run fast or to challenge oneself but just to complete a 5km course while being plastered with non-toxic and non-allergic powdered paint (made of 100% natural food-grade cornstarch) in every colour of the rainbow.

Pretty much anyone can take part in the event, old and young, sport aficionados and first-time runners; the only requirement being for all participants to wear white clothing! Once the race starts, then it becomes a real colour fest: After the first kilometre, runners are doused in blue, after the second red, and so on, until they reach the finish line, covered head-to-toe in every imaginable hue. 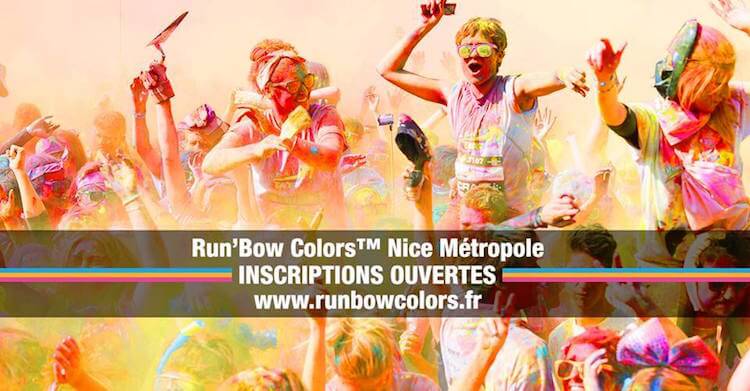 And if after all that, you feel that there is still something missing, then let the official DJs of the Run’Bow Colors™ carry you away on a wave of sound to wrap up this festive occasion.