To dine where Italians dine, you don’t need to cross the border. A simple trek to downtown Nice or up to Cimiez will do.

Once upon a time there was a happy family who lived on the beautiful Bay of Amalfi, a stone’s throw south of Naples….. No, we are not telling you a fairytale here but the real life story of the men behind the two best Italian restaurants – in Nice. It is an enchanting tale though, complete with challenges and passion, and an authenticity that you can taste in every morsel of food on your plate. To understand what sets these two restaurants apart in a city that has deep Italian roots, and which seems to have more ristoranti italiani than Rome and Milan combined, join us on a trip back in time to the magnificent Amalfi coast with its picturesque villages towering precariously above steep cliffs, and a Michelin-star worthy cook in every household, called Nonna or Mamma. That’s where it all started. 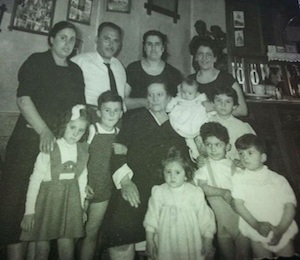 We’re in the late 1960 and early 70s. The Mansi family were simple, good, hardworking folks. Not poor – they owned land which they cultivated growing lemons – and not uneducated because it really mattered to them that each of their five children went to school and studied as hard as possible. But their means depended on the quality of the annual lemon harvest, and to supplement the family income in slimmer years, the older kids had to start working early on in life. At just 13 years old, Matteo worked at a hotel and Gerardo at a restaurant, but taking their father’s advice to heart, they also continued with professional schooling.

The restaurant Gerardo worked at, Il Giardiniello in Minori, was not a small affair. In fact, it has since earned a Michelin star and international renown. But at the time, it was simply the best local eatery, and Gerardo learned all the secrets of true Neapolitan pizza making. But beyond twirling his dough, he also peeked over the shoulder of Annunziata “Nunziatina” Celio who ran the kitchen, and it was her who truly taught him the artisanal trade of cook. All in all, he stayed on for ten years. 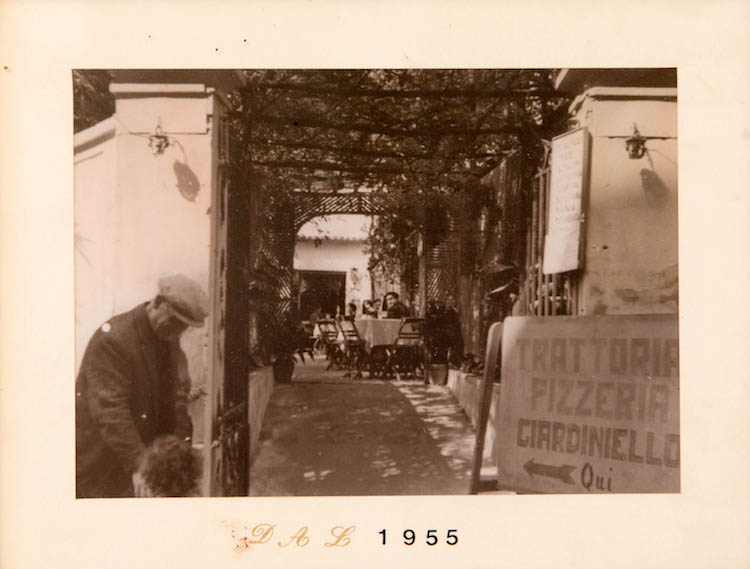 When the Italian army called Gerardo to Sicily for a two year stint, he felt naturally drawn to the kitchen. He loved roaming the local fisher markets and maximizing a small budget to create great meals, much to the delight of his comrades. It became increasingly clear to the young man that his professional future pointed to the culinary world.

As far as Gerardo’s older brother Matteo is concerned, he had gone on to work on cruise ships but one day, the strapping 19 year old Neapolitan’s eye falls on a pretty French lady, and he follows her to Nice. When a few years later Gerardo and his own beautiful bride Agnese consider the possibilities of raising a family in their economically poor part of Italy, it is an easy decision: in 1980, they follow Matteo to Nice… in typical Italian emigrant fashion, with a simple cardboard suitcase in hand, squeezed in a tightly packed train from Salerno.

And here, for both brothers and their growing families, it is work, work, work. It won’t be long until both have their own restaurants, quickly racking up award after award, and distinction after distinction. The rivalry is friendly and brotherly – both excel equally at what they do. The food – everything is prepared in-house, from scratch – is refined but down-to-earth Italian fare at its best, hearty, and prepared with the two most essential ingredients of them all: love and passion. And the ambiance is cordial and “la famiglia”. You step through the door, you are welcomed like a long-lost cousin or a friend one has not seen in years. Forget about these two places being restaurants – they are your home for the duration of your visit. 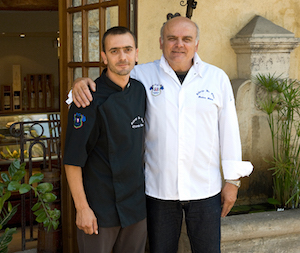 Matteo, or Theo for short, is the culinary genius behind L’Auberge de Théo, established 34 years ago. Despite its location in posh Cimiez, erstwhile winter resort to Queen Victoria, there is nothing overly fancy about this restaurant. A notch above trattoria, but far from a formal and stiff affair. Heavy oak wood, rustic tiles, and exquisite masonry work throughout give you the feeling of having come to your favorite uncle’s well-appointed country retreat.

Conviviality rules, and Theo is still occasionally found wielding pots and pans himself, but often leaves them to his son Christophe (pictured with his father) and chef Luigi Fiore, being busy with other engagements. The menu emphasizes fresh seasonal products, and although paste and pizze are heavily represented on the menu in honor of the family’s Southern Italian heritage, you cannot die happy without having tried the seafood alla plancha platter! Everything is lightened up a bit to accommodate modern tastes and nutritional preferences but whatever you find on your plate has retained all the simplicity, goodness, and originality of Italian home cooking.

Theo’s brother Gerardo Mansi, meanwhile, is the owner of La Baie d’Amalfi, a similar type of restaurant in downtown Nice. A stone’s throw from the Coulée Verte and the busy Avenue Jean Médecin shopping mile, this is the elegant and yet cozy urban version of the Mansi trademark. Murano lusters, bucolic murals, and rich fabrics give this restaurant a touch of class while the charming staff puts you entirely at ease. 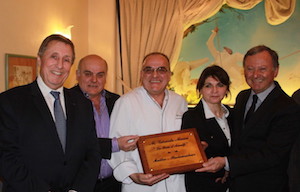 At any given day, lunch and dinner, this spacious place is packed to capacity, and it is quite hard to get a seat without reservation. That in itself tells a story at times where restaurants struggle to fill. The kitchen, headed by Michele Saulle and Roberto Tiboto, produces small edible miracles, and the front staff treats patrons like royalty. The clientele is chic – few tourists stray in this quiet backroad – but on closer inspection, you discern the unmistakable accent of Italian-Niçois. This is where the local “–etti” and “–oni” go for some of the best seafood in town, or the sensational antipasti plate. The desserts, especially the homemade tiramisu, are also famous far beyond city borders. But for all its refinement, La Baie d’Amalfi, like Theo’s Auberge, is surprisingly easy on the wallet.

The younger Mansi generation is divided about a career in the culinary arts: Theo’s son Christophe followed in his father’s footsteps and has competently taken over the day-to-day management of l’Auberge, leaving Theo the time to pursue his educational, social, and charitable activities outside the restaurant. Gerardo and Agnese’s three children have chosen different paths – Tommaso, the oldest son, is a medical research scientist at Princeton, Laura is well onto her way to becoming a leading French oncologist, and kid brother Fabien is an investment banker in Paris. But they all know their way around the kitchen blindfolded. “It’s genetic,” Gerardo insists with a big smile. “We inherited the love for cooking and eating from our mother, and we passed it on to our kids.”

Both Mansi brothers share a deep passion not just for cooking but also for preserving culinary heritage and teaching. This is why both are members of the exclusive Maîtres Restaurateurs association. This sought-after label, bestowed by the State, rewards restaurateurs who guarantee to adhere to highest gastronomic standards: top quality, all-homemade products, and respect of tradition. Theo especially plays a very active role in the association as the President of the departmental chapter. Having crossed the big 6-0 a while ago, he increasingly channels his abundant energy into training up-and-coming talent, often participating as a mentor, coach, or jury member in competitions such as “Jeunes Talents”, the current nationwide search for the next rising superstar of the culinary kingdom. “Passing on our values to the young generation really matters a great deal to me,” he tells us. “And it is important that it is done well. I am only here for a short time but the young generation in turn is the one who will have to train and shape the ones after them.”

The Mansi life philosophy is simple: Work and study hard and give your best, and you will succeed. But beyond that, they are Italians through and through, they just love to laugh and have a great time…. and sing. Both have wonderful voices, another treasure their mother handed down the genetic string pole. “When I came home from school, I already heard my mother through the open window, she was always singing while cooking, she just loved it,” Gerardo revels in childhood memories, “and without even thinking about it, I just started doing the same when I was a cook in the army.” Today, they still occasionally entertain their delighted dining crowds with Neapolitan songs, only adding to the cordial and convivial ambiance of their restaurants. 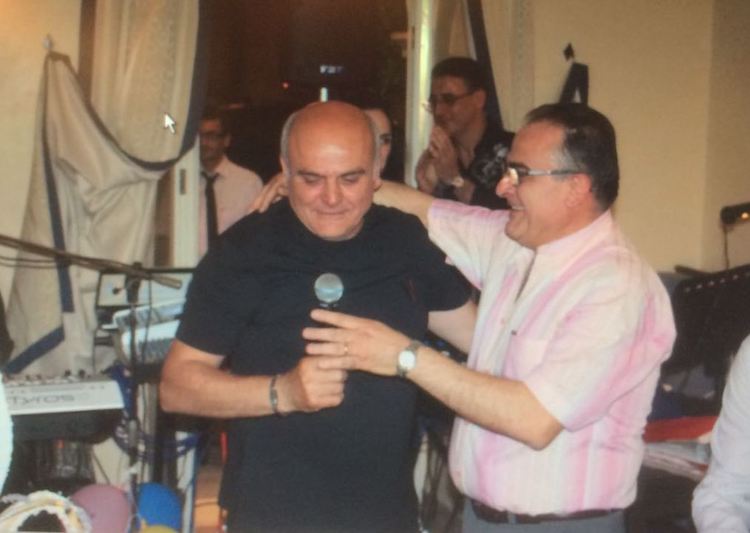 Their savoir-vivre all’italiana, their honest, authentic cuisine, and their generous, cordial spirit is what has made the Mansi brothers Napoli’s culinary ambassadors to Nice for over three decades, and nothing is slowing them down. Needless to say, they are cooking up amazing holiday menus, and if you have never had the great good fortune to dine at L’Auberge de Théo or at La Baie d’Amalfi, now is the time to do so. It’s Italy in your plate, at its best. Check out the delicious holiday menus online, and try to resist (but we know you cannot). And if you never knew you had Italian family in town, you do now…