One of Nice’s almost hidden delights, once you have discovered Emma’s Cupcakes, we guarantee that you will definitely be going back!

The delightful demi-Parisian salon, demi-English teahouse known as Emma’s Cupcakes was birthed – literally – from its owner Flora’s own pregnancy with her daughter, Emma, for whom the café is named.

Flora, with all of her international restaurant and service industry experience behind her, was never one to feel the need to indulge a sweet tooth – that is until the pregnancy cravings kicked in.

“This is actually why I named the shop “Emma’s,” because I had this idea thanks to my daughter,” Flora said. “I wasn’t that much into sweets before having her and she gave me this craving for sweets. All I did came from that, so it’s an homage to her.” 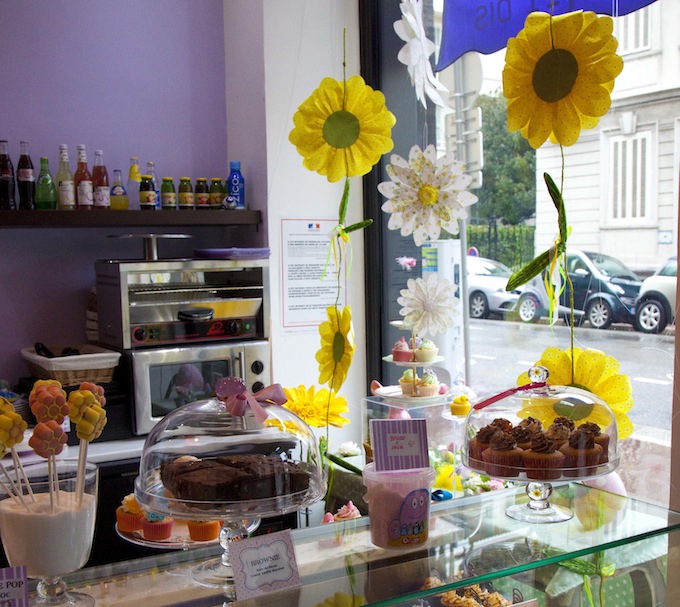 Due to unfortunate complications throughout Flora’s pregnancy, she was forced to stay at home for the last five months of her term. Take loads of spare time, a craving for sweets, add them together and you have the ingredients for Flora’s at-home baking debut. Feeling bored with all of the spare time on her hands, Flora planned a big baby shower at which to present her newly developed pastries.

“Everyone went crazy over the cupcakes,” Flora said. “That was a big success for me because it was a new start. And, from that moment, I started reading more and more books and buying equipment from U.S. and English websites. I started baking more and more and I really enjoyed it every time a bit more, and this is when I started thinking that it would be great to be working while I was doing something that I loved so much.”

After three months of renovations of a former property agency and the installation of the Alice in Wonderland-inspired décor, the pastels, the handmade French silk lampshades and the lavender banquettes, you have the feeling you really did fall down the rabbit hole and into the Mad Hatter’s tea party.

Flora chose to specialize in cupcakes because she said they aren’t so popular to find around these parts of the Riviera. And that’s what she loves – developing new things all the time that you just can’t find elsewhere. 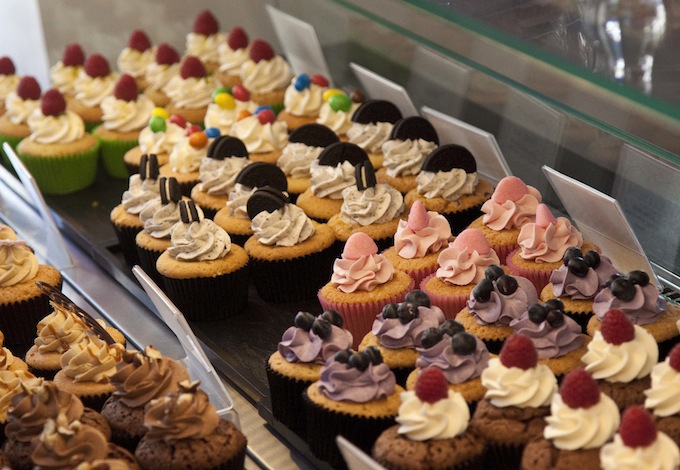 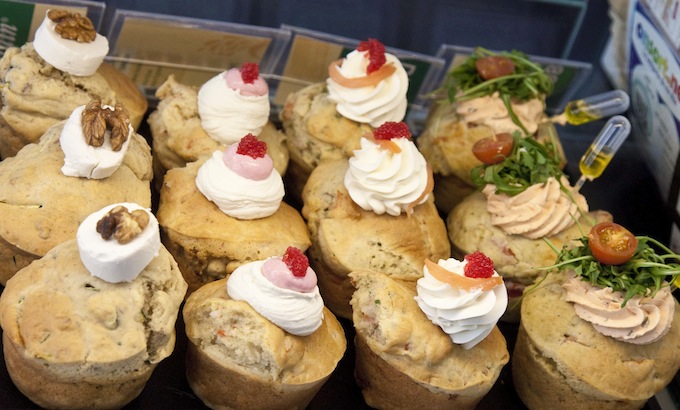 Flora and her team also team also offer baking classes, deliver anywhere from Monaco to Cannes and have about 30 different flavours of sweet and savoury cupcakes to choose from. Everything is made from scratch on site, nothing is bought and nothing is frozen.

The team currently specializes in making cupcakes and birthday cakes (with orders to be placed one week in advance), and is moving towards the development of wedding cakes.

“When I knew that I would go professional on opening a salon de thé, I took a special course,” Flora said. “The teacher was trained in England and in America, so she trained me for two months to have the right way of doing cupcakes professionally instead of “home baking,” because it’s different techniques.”

Flora also has a professional pastry chef, Alexandre Gory, on staff because she wanted someone really specialized in making French pastries.

“I wanted the cupcakes to have a twist of French savoir faire,” she said.

Since their 3rd December, 2012 launch, it goes without saying that Emma’s Cupcakes is reaping the success of all their hard work and have become a new staple in the community.

“For the opening, we were ready, but stressed,” Flora said. “From day one, it just went crazy because people were really expecting us to open. We didn’t know that. We thought it would start slowly, as I guess it does for any shop, because it’s hard to become known, but it was just absolutely crazy. There was a ton of people. It was great.”

Flora admitted she wasn’t quite sure if the community demographic would understand her concept of a cupcake shop, but she said that people come in and ask a lot of questions and want to try her new delicacies.

“The younger ones, I think they’ve heard of places like this in books and on TV and while travelling, but for the older people, they were very curious, like sticking their faces to my window, trying to see what we were doing. It was curious for them,” she said.

Flora said she not only loves the fact that everyone enjoys the cupcakes, but that she loves the creativity of it – the designing, the dreaming – all of which supports the influence of Alice’s magical Wonderland.

“I like the idea that, if someone comes in here, then maybe they can dream a little bit,” Flora said. “Because you look around and you have the sayings “eat me,” “drink me,” and you too can start having your own story while having your drink and your cupcake.”