A few weeks prior to their immersion into the waters off the Lérins Islands, renowned British artist Jason deCaires Taylor presents his monumental works, based on six local models

If you’re an ecologically minded arts lover, chances are you are already well familiar with Jason deCaires Taylor. The sought-after, uniquely gifted artist creates entire marine landscapes and parks, not only for humans but also for sea wildlife. But if the British sculptor, environmentalist, and professional underwater photographer has not yet reached household name status in France it simply has to do with the fact that his larger-than-life statues have never before been on display in this country. That is about to change.

Upon invitation from Cannes’ mayor David Lisnard, the artist has created six stunning stone profiles, based on the likeness of local residents. These monumental œuvres were recently unveiled to the public before they are departing to their destination off the shores of Cannes in November. Immersed in shallow waters, the ensemble will form the first eco-underwater museum not just in the Mediterranean but in France.

Cannes first wanted to contact Jason deCaires Taylor in 2015 but the artist was also wooed by Marseille and subsequently opted for the Phocean City. But when the project tanked there due to an administrative and financial squabble at the local municipal government level, Cannes’s forward-thinking mayor quickly pitched in, and in 2018 commissioned the sculptor to create an underwater eco-museum in the City of Festivals.

The jointly chosen theme was evident: who says Cannes, says film festival. Who says Lérins Islands, says Man in the Iron Mask – the famous and mysterious 17th century prisoner who from 1687 to 1698 was incarcerated in the fortress that now houses the Musée de la Mer on Île Sainte Marguerite. The mythical character that entered both in the city’s history and the annals of the world’s greatest movies, inspired Jason deCaires Taylor to pick the theme of “mask”. Little did he know that two years later, when he presented his work to the public in October 2020, “masks” would take on a whole different meaning…

A Multifaceted Artist and Lover of the Sea 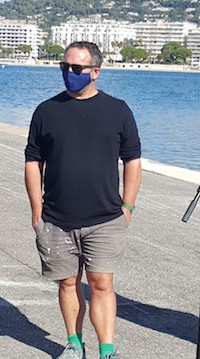 Born in 1974 in England to a British father and Guyanese mother, Jason deCaires Taylor is renowned worldwide for the quality of his work and his active commitment to the protection of underwater environments. His artistic, social, and environmental vision has made waves around the world for almost 15 years. And said world has been his playground since his childhood which he and his family spent roaming between Europe, the Caribbean, and Asia. But Malaysia was where he grew up for the most part and where he fell in love with the sea.

He qualified as a scuba diving instructor and then directed his strong interest in the arts, conservation, underwater naturalism and photography into a BA Honours in Sculpture and Ceramics from Camberwell College of Arts. In 2006 he created the world’s first underwater sculpture park in Grenada, West Indies, filling it with his own designs. His sculptures bear a poetic grace, showcasing natural ecological processes while offering the viewer a unique, absorbing, and expansive visual seascape. They constitute reefs serving as a refuge for underwater life and raise public awareness of the need to preserve marine biodiversity.

That first project brought him international acclaim. And since then Jason deCaires Taylor has populated the waters of Lanzarote, the Thames, the Bahamas, Cancun, Oslo, and Grenada (the latter named by National Geographic magazine as one of the 25 Wonders of the World) with his thought-provoking and esthetic stele. It is now Cannes’ turn to host his new creations, as the first and currently only French city to do so.

Casting Call for the Cannois

In July 2018, a good number of local residents answered the public call to participate in the project, attracted by the idea of the indelible footprint they could leave on posterity but also by the artist’s contemporaneous photo expo Flux. 45 volunteers had their faces molded and cast in alginate, an algae-based product that captures details very well, right down to the tiniest wrinkle or hair. “It was a bit of a breathtaking experience, quite literally”, one of the models (who wishes to remain unnamed) told us, “but the momentary slight discomfort was quickly forgotten.”

Six of those casts, representing locals from all walks of life – from seven year old student Anouk Vangment to fisherman Maurice Merenda, age 78 – were chosen to have their faces immortalized in stone by the world-class artist. Why does he pick local residents as models, we want to know. “I like to think of them as stewards of our environment,” he says, “hoping this will motivate them to take a vested interest in the conservation of the treasure at their feet, and inspire others to follow their example.” 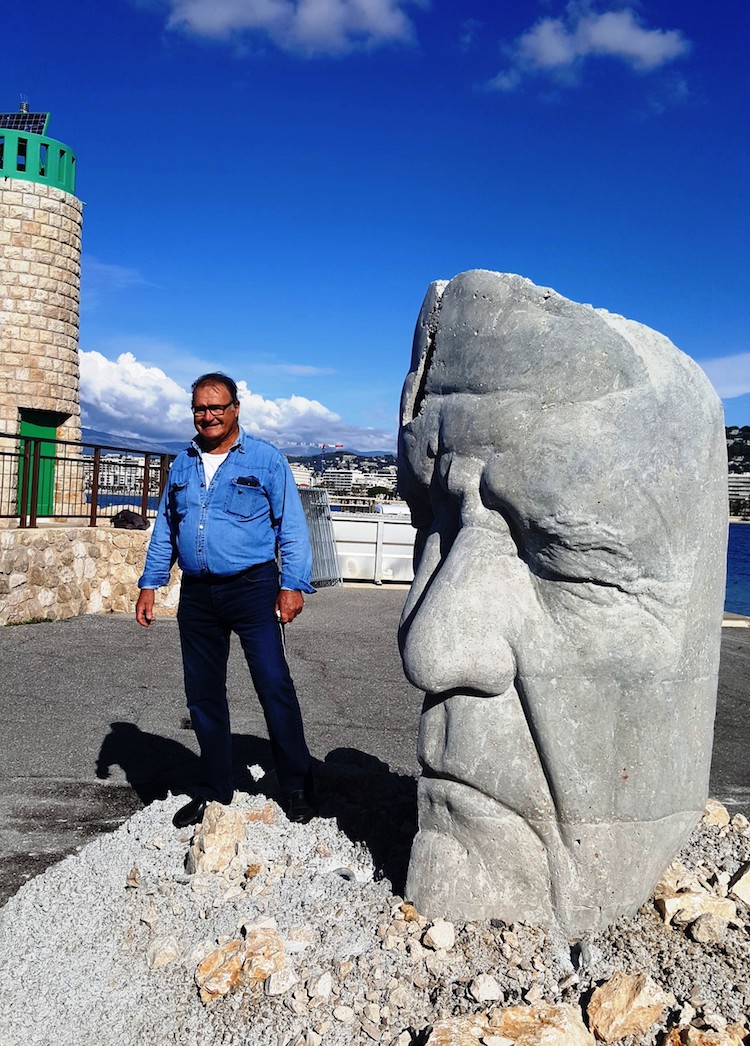 The casts were then sent to Jason’s atelier in the UK where he started the painstaking process of turning them into stone effigies. Made from environmentally friendly, non-toxic, marine grade cement with neutral pH, each statue is around two metres tall and weighs around nine tonnes. It took two semi-trailers to bring them back across the English Channel and to Port Canto in Cannes. Here, the artist put the finishing touches on them prior to their immersion in the newly dedicated sanctuary located near the southern shore of Sainte-Marguerite Island in November.

The unveiling of the statues in October, in the presence of Jason deCaires Taylor, mayor Lisnard, and the models, was a touching moment, especially for those who had lent their features to the project and were about to discover the work for the first time. Most were surprised by the enormous dimensions, and all were more than happy with the outcome. “I didn’t think I was that handsome,” the group’s doyen Maurice Merenda said, visibly impressed by the encounter with his stony self. “Regardless of child or senior, man or woman, the common feature uniting these sculptures is that of the private face behind the mask we’re all wearing publicly”, was the message the artist wanted to convey.

At the Nexus of Art and Environment

Although the Mediterranean, and in particular the French Riviera, is uniquely rich in marine flora and fauna, the site of the new underwater eco-museum has not had any Posidonia (sea grass) for about thirty years. By designating a space of 54 m² just off the Lérins archipelago, the City of Cannes hopes that these sculptures help attract new marine residents, from plants to fish, mollusks, and crustaceans. “And then they will be completed and perfected by other artists,” Jason deCaires Taylor says. And although the museum is an underwater one – nomen est omen! – the artworks are placed at a relatively shallow depth allowing those who cannot snorkel to admire them from above.

Taylor’s artworks are essentially artificial reefs that co-exist in harmony with local fishing and diving activities, and which over time become an integral part of the local ecosystem. The cement he uses is highly durable, with a rough texture that encourages coral larvae to attach and thrive, while nooks and dark cubbyholes formed of folds of clothing provide homes for fish and crustaceans. The timing of installation is significant to ensure optimal conditions for sea life to install itself safely before spawning.

As secondary benefits, these installations also provide opportunities for scientists to study and monitor the development of a functioning ecosystem from its very beginning through to becoming well established. The public at large, especially youth, can develop greater awareness for the pressing needs of a rich and healthy biodiversity. And a more abundant, healthier sea fauna also creates better yield for local fisherman without disturbing the marine equilibrium. 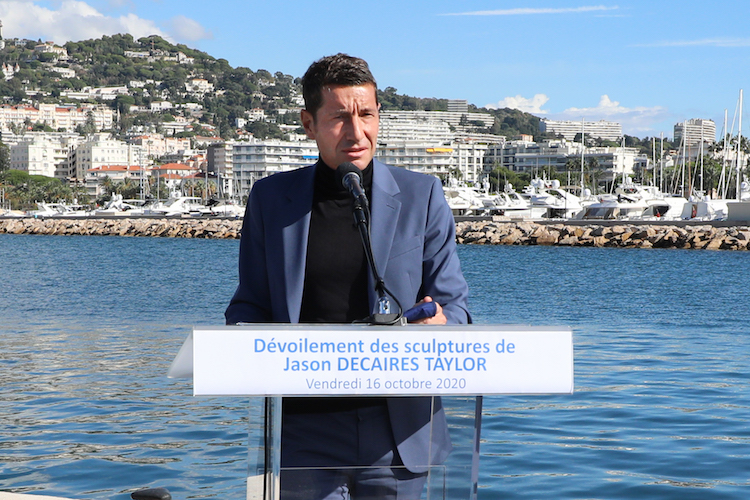 Securing the site and going through the long administrative authorisation process required was quite the uphill battle but mayor David Lisnard was determined to bring this municipal project, unique in France, to fruition. The implementation of the project will be accompanied by regular ecological monitoring of the underwater ecosystem of the Iles de Lérins archipelago. It will constitute a privileged observatory of the evolution of marine biodiversity, in line with City Hall’s desire to protect this natural area.

Lead image © E. Jacquet-FTV, all other photos as credited