A real treat for fans of Richard Wagner as Opéra de Monte-Carlo presents Tannhäuser in the Principality this February.

Richard Wagner’s operas could never be described as subtle – they’re grandiose affairs, with opulent scores, plots based on mythical tales or ancient folklore, and they’re visually sumptuous. Monte-Carlo Opera’s Tannhäuser – or to give the opera its full title, Tannhäuser and the Minstrel’s Concert at Wartburg – is likely to be no exception.

This production stars Argentine tenor José Cura in the title role. Internationally known for the intensity of his operatic portrayals, and his unconventional concert performances, he made history at the Hamburg Opera in 2003 when he conducted Cavalleria Rusticana – the first part of Mascagni’s double-bill – and after intermission, appeared on stage to sing the role of Canio in Pagliacci, in the second half of the programme.

Canadian baritone Jean-François Lapointe sings the role of Tannhäuer’s friend Wolfram. He won high praise from critics for his portrayal of Hamlet in a recent production by Opera Marseille. Michel Egea of DestiMed wrote: “Vocally, the baritone is impeccable; A precise and voluminous line of singing, of suppleness, of color, a perfect diction: nothing to say.”

The role of Elisabeth is sung by American soprano Meagan Miller who incidentally is the daughter of a NASA scientist, and who’s regarded as a rising star in the world of opera. Following her performance in the title role of Haydn’s Armida at the Royal Concertgebouw in Amsterdam, De Verdiepig Trouw referred to her “remarkably brilliant high range”, and Opera magazine wrote that “her intensity and musicality were more than impressive”.

French mezzo-soprano Aude Extrémo sings the role of Venus. She has appeared in most French opera houses – from Paris to Bordeaux, to Marseille, Tours and Rheims – and also in Monte-Carlo. Later this season she will appear as Ursule in Berlioz’s Béatrice et Bénédict at the Paris Opera, in Verdi’s Messa di Requiem at Bordeaux’s Grand Théâtre, Honneger’s Jeanne d’Arc au Bûcher at Teatro Real, Madrid, and Arsace in Rossini’s Semiramide at St-Etienne Opera.

Wagner’s Tannhäuser (with a libretto by the composer) is set in the subterrannean realms of Venus, goddess of love, and in the castle of the Landgrave Hermann. Inspired by two German legends – that of a 13th century Minnesänger, Tannhäuser, and the tale of the Wartburg Song Contest in Thuringia – it tells of the inner conflict of the central character who’s torn between his love for the goddess Venus and for Elisabeth, niece of the Landgrave Hermann.

Having spent a year in the magical underground realm of the goddess Venus, Tannhäuser – much to the displeasure of the goddess – decides to return to earth and is persuaded by his friend Wolfram to enter the minstrels’ song contest in the Wartburg Castle, home of the Landgrave Hermann. There, Elisabeth – his former lover – has been waiting for him. He commits an unforgiveable sin by selecting a song for the contest in praise of Venus, and the Landgrave banishes him to Rome to seek the forgiveness of the Pope – which is refused. Tannhäuser calls on Venus, wishing to return to her realm, but as she appears, he sees the funeral procession of Elisabeth, who has died of grief. Venus disappears with a cry of anguish, and Tannhäuser implores Elisabeth to pray for him in heaven, before he falls to the ground, dead.

Tannhäuser premiered at the Court Opera in Dresden in 1845, but was subsequently revised several times. In 1861 it was premiered by the Paris Opera in the Salle Le Peletier, where, according to the traditions of the house, a ballet sequence was required, so Wagner inserted a ballet into the opera – a pageant of bacchanalian revelry set in Venusberg, the sensual world of the goddess of love.

Tannhäuser was first staged by Monte-Carlo Opera on February 3, 1906, and the last performance by the Company took place on 23 January, 1932. Now – some 83 years later – we have a new production of the Paris version, by Jean-Louis Grinda, with decor and lighting by Laurent Castaingt, costumes by Jorge Jara, and choreography by Eugenie Andrin.

Musical direction is by French conductor Nathalie Stutzman (pictured below), who is also a well-known contralto. In 2015 she began a 3-year tenure as Associate Artist of the Sao Paulo State Symphony Orchestra – a multi-dimensional collaboration, with a focus on conducting projects. Ms Stutzmann is also Associate Artist of the Orchestre National de Bordeaux for the current season, and as of September 2017 will become Principal Guest Conductor of the RTÉ National Symphony Orchestra of Ireland. In 2012 she received high praise from Sir Simon Rattle who is quoted as saying: “Nathalie is the real thing. So much love, intensity and sheer technique. We need more conductors like her”. 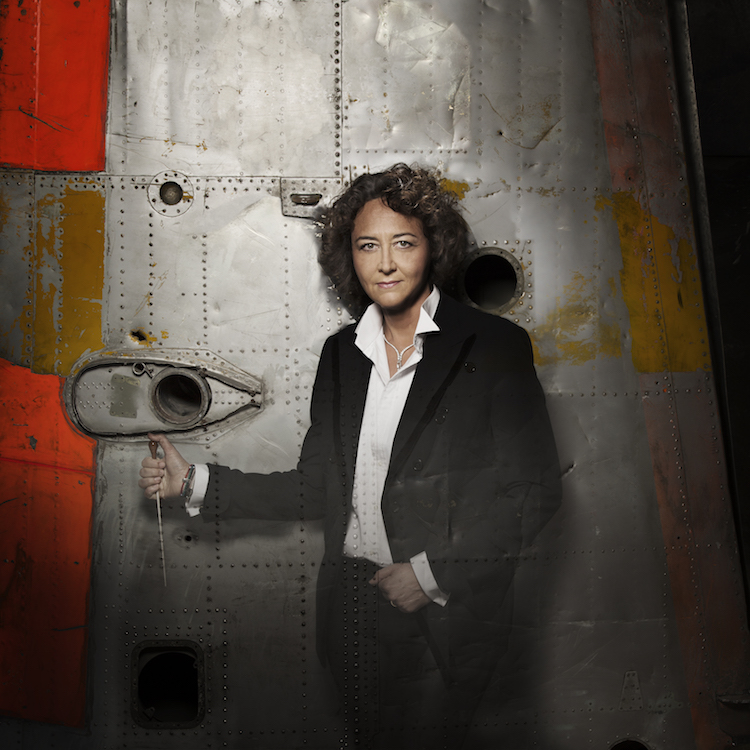