Aragon, famed poet and close friend of the painter, goes on to point out that just like a writer needed words to nourish his art, Matisse found his inspiration in the objects surrounding him in his everyday life.

These objects, so important to the French painter, are now the subject of an exhibition that opened recently and runs throughout the summer at the Musée Matisse in Nice. Entitled ‘Henri Matisse: Une palette d’objets’,  the exciting event features fabrics, curtains, vases and furniture of various origins that all belonged to the artist alongside paintings, lithographs, and drawings containing these objects. 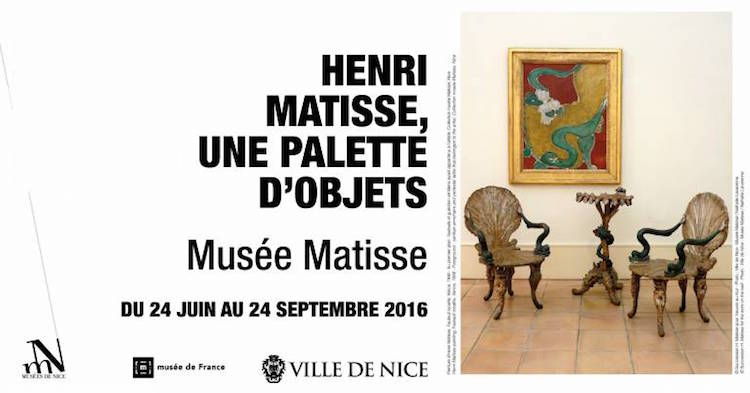 Collected over the years and covering different periods of the painter’s life, this vast palette allows visitors to better understand Matisse’s work, as well as his interests and sources of inspiration.

The exhibit also honours the wishes of his wife and children, when they donated more than a hundred objects and books to the city of Nice in order to help set up the museum, which opened in 1963. They wanted to create “a harmonious and coherent collection, permitting to follow the process and the different researches of the Master”.

Since then, this unique collection of objects, the main elements of which are already on display in the museum, has gradually been enriched by various acquisitions. This is the first time, however, that they have been shown side by side with the works of art representing them, thanks to prestigious loans from museums throughout the world.

Matisse once said that “environment does create an object. Thus I have worked all my life with the same objects, which gave me the strength of reality, engaging my mind to all what these objects had been through for me, and with me”. The exhibit definitely shows that even the smallest source of inspiration can lead to the creation of great works of art.

‘Henri Matisse: Une palette d’objets’ runs until the 24th, September 2016 at the Musée Matisse in Nice. The museum is open daily from 10am to 6pm. Admission is free.