Collectif 8 revisits another literary classic in its inimitable theatro-cinematographic style at anthéa this January.

Only weeks after its triumphant La Religieuse, lauded as one of the most innovative contemporary adaptations ever of Diderot’s text, Collectif 8 is back on its home stage at anthéa as the opener of the new year, proving why it is rightfully considered one of the leading French theatre companies: in Molière’s George Dandin, classic literature meets steampunk, theatrical codes meet videographic ingenuity, and 17th century societal issues meet their modern day counterparts. The result: a play that will set the bar for 2017 almost impossibly high.

To refresh the memory: George Dandin is a rich farmer who marries the daughter of an impoverished noble family. Although he becomes Monsieur de la Dandinière, his wife’s parents continue to regard him with disdain – for them, he remains a simple peasant, while his wife keeps fooling around behind his back. Humiliation and tragicomedy result in a nightmare…

Presented in Collectif 8’s signature style at the delicate balance between theatre and cinema, this play takes a hard look at the dissolution of human values and the increasing merchandization of society and individuals. Molière often disguised his critique behind farce and burlesque, but underneath that mask, George Dandin cynically exposes society’s flaws and that is as pertinent today as it was in 1668 when it was written. A dark play, yes… but at the same time filled with humour and poetry.

The two protagonists’ destinies, based on their social status, never truly intersect, and each regards the world through their own conditioning. Their marriage is a business transaction, trading money for social rank. George, believing he has taken the social elevator up, seeks recognition, only to find that the upper echelon is an impenetrable circle that thinks nothing of kicking him back down again. Meanwhile his wife Angélique tries to escape the rigid protocols dictated by her class and pursues freedoms that a woman of her rank does not ordinarily have. Her omnipresent father lords over the couple, steering their fate as it pleases him. Parallels with modern society are not far off…. Can money buy access to certain circles? Can women truly liberate themselves and shatter the glass ceiling? How do you claim justice from a dictator? And what happens to one’s mind and feelings when they have to take more abuse than they can? A nightmare begins…

Based on the relevance of text that is nearly 450 year old, C8 once again masterfully bridges genres by juxtaposing them. This is not a contradiction, but the red thread behind their entire body of work. Respect for classic literature and a raw contemporary interpretation – nothing more normal to Gaële Boghossian and Paulo Correia, the two founders and masterminds behind the company. The scenography between traditional architecture and industrial steel frames connects the dots between the centuries. Acoustic cues like a hard riff on the bass or a bone-shattering bang on the percussions express the characters’ increasing turmoil and frenzy, videos reflect the hallucinations of the mind, lighting effects mirror the increasingly somber mood. A troubling, disturbing and yet extraordinarily esthetic take, directed by Paulo Correia – another contrast that is not a contradiction. 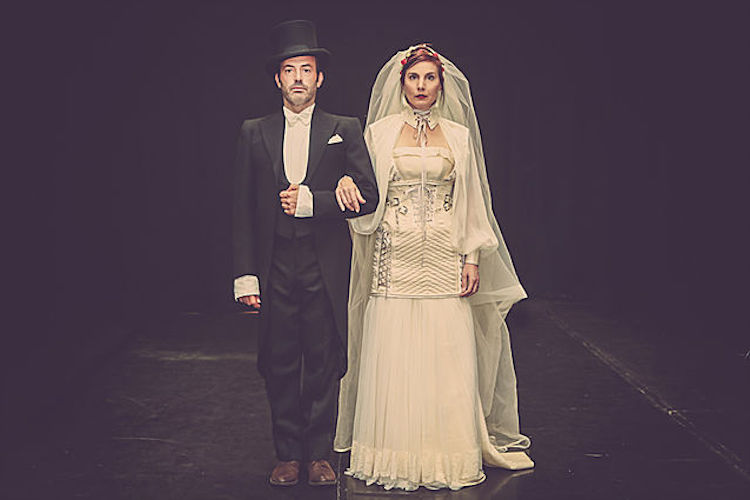 Paulo himself slips into Dandin’s boots, interpreting the title hero with force and charisma as he vacillates between insecurity, pride, anger and despair. Gaële Boghossian inhabits Angélique, a woman whose snobbish demeanor hides a degree of vulnerability, and both of these shine through in Gaële’s passionate play. Paul Chariéras, hands down one of the very best actors in this region and a staple in C8’s productions, convinces once again as the haughty father-in-law. Melissa Prat is Claudine, servant and frivolously charming accomplice to Madame’s extramarital shenanigans with her lover Clitandre (Benoit Berrou), while Sam Chariéras takes on the part of Lubin, friend of Clitandre and aspiring to Claudine’s heart. Benoit Berrou also performs the on-stage live music.

Anthéa has a treasure there, and they know it. When Daniel Benoin left the Théâtre National de Nice in 2014 to open anthéa in Antibes, he swiped his former TNN house company, which proved to be a stroke of genius. He gave Collectif 8 the space, budget, and confidence they needed to truly spread their wings and soar, and they did. Having always been highly professional, original, and prolific, they have since blossomed into one of the leading French troupes, inventing and owning “cineâtre” – a niche that marries cinema to theatre. Surrounded by remarkable talent within the company as well as the occasional guest, Gaële Boghossian is one of the best actresses of her generation, and Paulo Correia goes from strength to strength as an artistic director. Their instinct for transposing classics such as Angelo Tyran de Padoue (Victor Hugo, still at TNN), L’Homme Qui Rit (Victor Hugo), Alice (Lewis Carroll), Double Assassinat dans la rue Morgue (Edgar Allen Poe), Faust (Goethe), or La Religieuse (Diderot) into contemporary context, with all their psychological subtleties intact, is infallible. Their precision down to the smallest detail, from the happenings on stage to remarkably informative accompanying dossiers, bears testimony of their professionalism and artistic intelligence. No wonder why each and every of Collectif 8’s performances, anywhere in France, is booked out rapidly, and why they are the audience’s and critics’ coup de coeur wherever they appear. 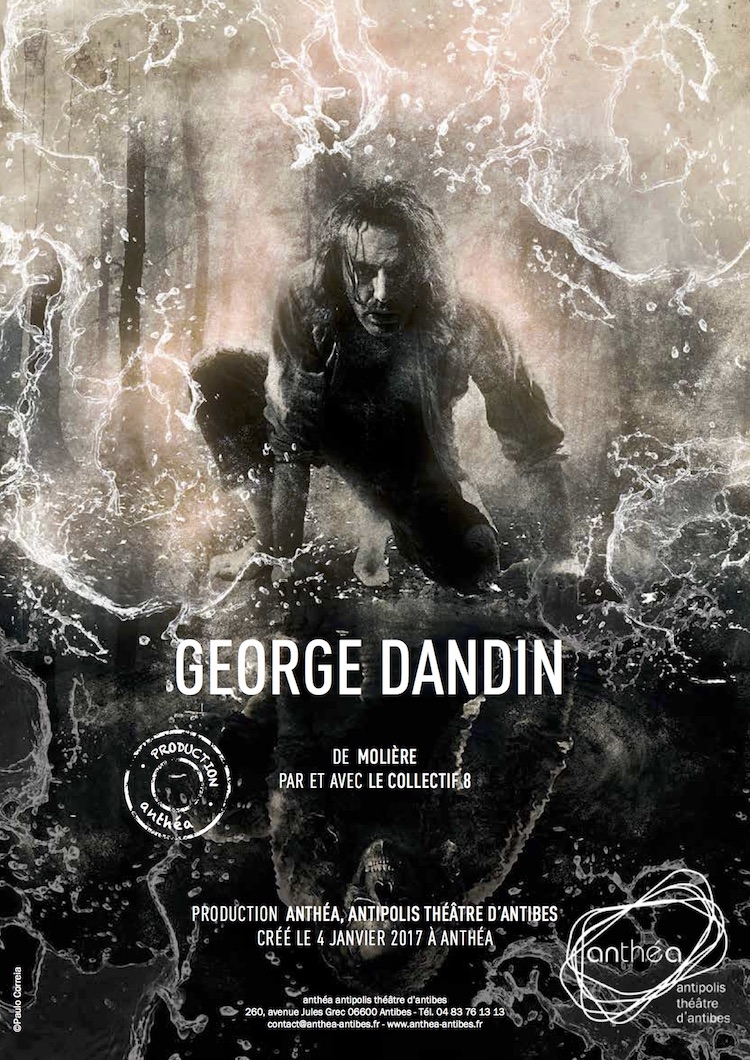 George Dandin opens at anthéa on January 4 and is on the playbill through January 19. For details and reservations, please visit the theatre’s website.

As a special gift for those who wish to peek behind the scene: follow Les Billets de Marie (in French), where Marie Gagliolo regularly shares some of the details and inside stories around the production.