With winter hovering on the horizon, we have the Riviera opera season to take our minds off those chilly nights, and this month we feature two very exciting productions.

The productions in question are Cilea’s Adriana Lecouvreur in Monte-Carlo and Donizetti’s L’Elixir d’amour in Nice.

Truth, they say, is often stranger than fiction, and reading the inspiration for Francesco Cilea’s Adriana Lecouvreur, you could well believe this to be so. An Italian composer and teacher, Cilea (1866 – 1950) based his work on the true story of Adrienne Lecouvreur, a widely-adored actress of the Comédie Française, whose life and early death set the gossip-tongues wagging in 19th century Paris. Her narrative inspired many plays and operas, but Cilea’s work is considered by many to be the finest.

With a libretto by Arturo Colautti, after the play Adrienne Lecouvreur by Eugène Scribe and Ernest Legouvé, the opera in four acts was premiered at the Teatro Lirico in Milan on November 6th, 1902.

Cilea’s heroine, the actress Adriana Lecouvreur, has many admirers and would-be suitors, but she has fallen for Maurizio, Count of Saxony. Enchanted by her, he tries to remove himself from the clutches of his lover, the Princesse de Bouillon, but Adriana suspects that he is still in love with her. When the Princesse, who suspects that her lover has left her for another, finds out that her rival is the actress, she arranges to have her poisoned, and Adriana dies in Maurizio’s arms. But why let the truth get in the way of a good story?

The title role in this dramatic production is taken by Italian soprano Barbara Frittoli, regarded as one of the leading lirico-spinto sopranos of her time, and who has appeared in opera houses such as La Scala, Milan, Santa Cecilia in Rome, Vienna State Opera, The Royal Opera House, Covent Garden and the Metropolitan Opera in New York. Following Ms Fritolli’s performance in this role at Opera San Carlo in Naples, Bachtrack wrote that she “held the stage as Adriana with beautiful singing and superb acting ….” and delivered her two big arias “… with a combination of emotion and poise”.

Maurizio, Count of Saxony is sung by Roberto Alagna, arguably the most well-known French tenor of his time. With a repertoire which includes the title roles in Verdi’s Don Carlo, Alfano’s Cyrano de Bergerac, Gounod’s Faust and Massenet’s Werther, as well as Don José in Bizet’s Carmen, des Grieux in Manon Lescaut, Lt Pinkerton in Madama Butterfly and Cavaradossi in Tosca – all three by Puccini – he is welcomed by prestigious festivals and opera houses around the globe. These include the National Opera in Paris, New York’s Metropolitan Opera, The Royal Opera House, Covent Garden, Deutsche Opera, Berlin, and La Scala, Milan.

The role of the Princesse de Bouillon is sung by Italian mezzo-soprano Loriana Castillano, who – according to GB Opera has “… a beautiful voice, clear and sweet ….”, with a “…. beautiful ‘ambered’ timbre ….”. Winner of several international vocal competitions – including the International European Competition for Young Lyric Singers and the BBC Cardiff Singer of the World – Ms Castillano has appeared before with Monte-Carlo Opera, in the role of Violetta in Verdi’s La Traviata.

Maurizio Benini leads the Choir of the Monte-Carlo Opera (Director Stefano Visconti) and the Monte-Carlo Philharmonic Orchestra, in David Livermore’s new staging of Adriana Lecouvreur, a co-production with l’Opéra de Saint-Étienne and l’Opéra de Marseille. It is presented under the auspices of la Fête nationale monégasque.

The production takes place in the Salle des Princes at the Grimaldi Forum on November 19th, 23rd and 26th. Tickets may be reserved online at Monte-Carlo Ticket.

Nice Opera opens its 2017-18 season this month with a new production of Gaetano Donizetti’s L’Elixir d’amour, or L’Elisir d’amore in its native Italian. The libretto for this comic opera in two acts is by Felice Romani – the official librettist of Milan’s Teatro alla Scala – after a French libretto written in 1831 by Eugène Scribe for the opera Le Philtre by Daniel-François-Esprit Auber.

Although Donizetti wrote around 75 operas, many of them disappeared after his death at the relatively young age of 51, but the past 50 years have seen a revival of the popularity of his work, and L’Elisir d’amore has been among his most frequently performed operas. It was commissioned by Teatro della Canobbiana in Milan, and completed by Donizetti in six weeks. It premiered at the Teatro in 1832. 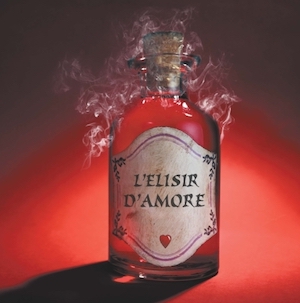 L’Elisir d’amore is a delightful comedy which tells of Nemorino, the poor country boy who wants nothing more than to win the heart of Adina, the beautiful and wealthy farm owner. He acquires a potion from Dr Dulcamara – a travelling salesman of dubious report – believing that it will make him more attractive to Adina, but his ploy nearly fails, as his pretence of treating her with indifference drives her into the arms of Belcore, leader of a regiment of soldiers. All ends well, though, when Adina confesses that she really loves Nemorino – who receives word that his sick uncle has died, leaving him a fortune. Belcore goes off with a new love, Gianetta, and Dulcamara is able to boast that not only does his elixir make people fall in love, but turns poor people into millionaires as well.

The role of Adina is sung by French soprano Gabrielle Philiponet. Well known on the stages of opera houses throughout France, Ms Philiponet has also appeared in Fribourg, Switzerland, on tour in Spain, with the Royal Liverpool Philharmonic Orchestra, the Montreal Symphony, at the Royal Theater of La Monnaie in Brussels, and the Grand Théâtre de Luxembourg. Her American debut, in the role of Violetta in Verdi’s La Traviata, took place at New Orleans Opera, and she has sung with Philharmonia Baroque in San Francisco. Ms Philiponet has also appeared in Venice, Turkey and Budapest.

Singing Nemorino is Italian tenor Davide Giusti, who has appeared in opera houses across Italy and in other European capitals. He has sung Cassio in Verdi’s Otello under the stars at the Macerata Opera Festival, and among his many other appearances are Lt Pinkerton in Puccini’s Madama Butterfly at the New Israeli Opera in Tel Aviv, Rodolfo in La Bohème at the Tchaikovsky Opera and Ballet Theatre in Perm, and Tebaldo in Bellini’s I Capuleti e i Montecchi at the Musikfest in Bremen. For the Opéra Royal de Liège Wallonie he has apeared as Fenton in Nikolai’s Les Joyeuses Commères de Windsor, as Nemorino in L’Elisir d’Amore, as Alfredo Germont in Verdi’s La Traviata and as the Duke of Mantua in Verdi’s Rigoletto.

Roeland Böer leads the Nice Philharmonic Orchestra and Chorus in Éric Chevalier’s production of L’Elixir d’amour, which also features Aude Fabre as Gianetta, Philippe-Nicolas Martin as Belcore and Marc Barrard as Dulcamara. It is sung in Italian with French surtitles.

Performances take place at the Opéra de Nice Côte d’Azur from November 22nd to 28th, and tickets may be reserved online.