The Chorus of the Sicilian Opera might be a relatively young ensemble, but it’s most certainly making its mark on the musical, theatrical, operatic and symphonic output of the island of Sicily, whilst also devoting itself to the research, development and export of Sicilian art.

Since the founding of the Coro Lirico Siciliano in 2008 – by the current choir master Francesco Costa, soprano Giovanna Collica and the organisation’s president, Alberto Munafó – it has become the official choir of the two major Sicilian operatic seasons – the Taormina Opera Festival and the Luglio Musicale Trapenese. The versatility and style of its members have enabled the Chorus to diversify from the traditional operatic repertoire to include both symphonic and sacred music in its range of virtuosity.

Among the honours which have been bestowed on this ensemble are the Golden Opera Award at the 2017 International Opera Awards – the ‘Oscars of Opera’ – held in Verona, the International Sicilian Prize ‘Il Paladino’ on the occasion of the fortieth anniversary of the award, the 2015 Bellini Prize, the Belcanto Ambassador Prize and the Academy of Arts Prize.

Drawing artists from the various provinces of Sicily, the Chorus is based in the city of Catania – a city steeped in musical history, and the birthplace of Vincenzo Bellini. It’s not surprising, then, that the Chorus of the Sicilian Opera identifies closely with him the composer of operas such as I Capuleti e i Montecchi, La sonnambula, Norma and I puritani. Indeed, the Chorus has dedicated itself to promoting the music of the composer known as Cigno Etneo, which translates as ‘the Swan of Catania’ because of the poignant melancholy of much of his music. (Etneo, an adjective meaning ‘Catania’, is derived from the name of the Sicilian volcano ‘Etna’.) The first Opera Gala at the Ancient Theatre of Taormina, under the direction of Steven Mercurio, was devoted to the music of Bellini, and the ensemble’s first appearance in China – at the Macau International Festival – was in a production of Norma by the Royal Theatre of Turin.

One of the proudest achievements of the Sicilian Lyric Chorus has been its production of Bellini’s little-known opera Zaira, which was presented in Catania at the Greek-Roman Theatre on the occasion of the Bellini Festival in September 2012 – a production which featured some of the performers of the original cast of the opera’s world premiere in 1976. The ensemble hopes, in the future, to take a revised version of this opera to the world, with the inclusion of excerpts which have since been discovered, but never performed. 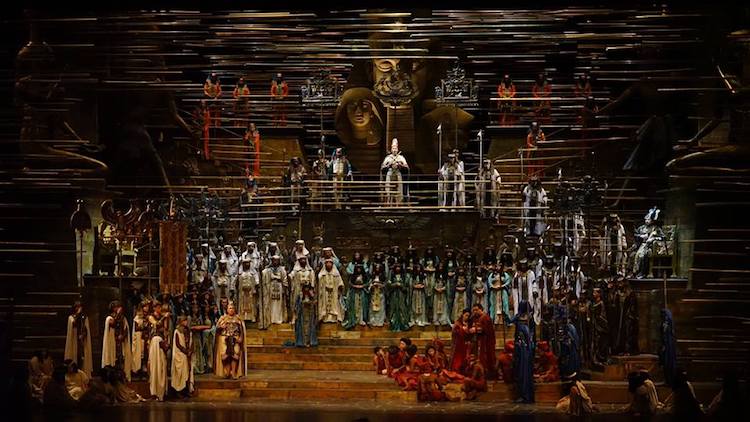 The Choral Institution has also performed some of the sacred works of the young Bellini, including some first performances which it has discovered, and it’s hoped that the ensemble will be able to create and record the complete collection of his sacred works.

In the field of sacred music, the Chorus works with the annual International Sacred and Renaissance Music Week, held in early September, with concerts taking place in the churches of San Martino, San Cataldo, San Cataldo and San Giovanni Battista, and live broadcasts from the Teatro Antico in Taormina via the RAI and Sky channels, and to over 700 cinemas worldwide via the Microcinema circuit.

The Chorus collaborates with institutions such as the Teatro Massimo in Palermo, the Teatro Comunale di Bologna, the Orchestra Sinfonica Siciliana, the International Music Festival of Macau, the China Opera Festival and the Orchestre national d’Île de France. Illustrious names with which it has been associated include José Carreras – at a special New Year’s gala at the inauguration of the Harbin Opera House in Heilongjiang Province, China, in 2017 – Fabio Armiliato, Marius Stravinsky, Franco Zeffirelli, Andrea Bocelli and the Sistine Chapel Choir

At the present time, of course, the Chorus has had to suspend live performances, but planning has already started for the second edition of the Festival dei Teatri di Pietra, at which the ensemble hopes to appear in productions which include Verdi’s La Traviata, Mascagni’s Cavalleria Rusticana, and Beethoven’s Symphony No 9. Tours of Spain, China and the Lebanon are also currently being negotiated for the forthcoming autumn and winter seasons, when – it is hoped – music and art will again be thriving.