But Fernando Botero and Pablo Picasso shared much more than just the same language – Spanish – and common cultural references, as they both adopted a radically modern approach in the history of figurative works. These artistic affinities are now on display at the Hôtel de Caumont in Aix-en-Provence thanks to a fascinating exhibition, “Botero: a Dialogue with Picasso” which presents the Colombian master’s rich œuvre side by side with twenty major masterpieces from the man who inspired him.

In his youth, Botero was greatly influenced by the Spanish artist’s non-conformism, as well as by his rich and sensual palette. As he one said: “You cannot finish something if you do not begin. You have to finish something you have started, and take risks. In that regards, there is no better example than Picasso”. The exhibition starts with a series of portraits and self-portraits from both artists that show how they represented themselves and the way in which Botero viewed his Spanish counterpart. 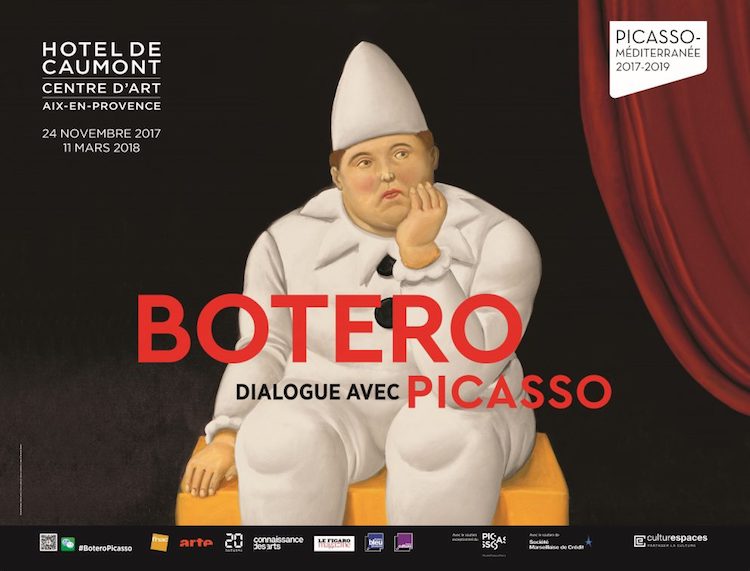 Interested in some of the same themes, the two men, influenced by classicism, particularly in the treatment of volumes, have produced paintings and drawings depicting similar scenes. Acrobats and traveling performers, dancers and musicians, bulls and bullfighters … All those characters, straight from their cultural heritage, became the stars of some of their most important works. Botero, like Picasso, was a witness to dramatic events in his native country and made a point of depicting the violence, often through an extensive distortion of his subject’s faces, of the South-American dictatorships, assassinations and earthquakes.

The exhibition also allows the visitors to discover some less well-known aspects of the Columbian’s œuvre, such as his still lifes which are sometimes monumental, and his female nudes, which were a genre to which the artist repeatedly returned to throughout his career.

“Botero: a dialogue with Picasso” runs until Sunday, the 11th of March, 2018. The Hôtel de Caumont is open every day from 10am to 6pm. Regular tickets cost €13 (reduced rates of €10 for students, unemployed and disabled visitors)