If you could choose just one photo exhibit to see all year, it would have to be Hurban Vortex in Cannes

Often, photography is the visual equivalent of telling a one-word story, expressed through an immediately comprehensible image. In contrast, Parisian photographer Boris Wilensky takes you on a journey through time, space, and humanity. His photos are true documentaries which require time to contemplate, and listen to. Yes, listen to, not just look at. Because all of his work tells a powerful, juxtaposing story. A story of humans in cruel, all-consuming urban environments… facing challenges beyond their control… surviving in harsh conditions… A story that is already written but that is reinvented every time you look at the image. 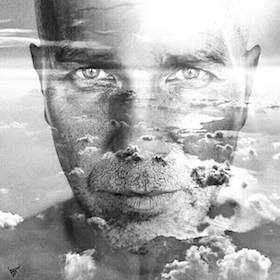 Boris Wilensky’s current exhibition Hurban Vortex at the Suquet des Art(iste)s in Cannes opened on December 9 last year, featuring a selection of 30 of his works. Much has been said and written about it, and him, since, so no further biographical introduction is needed. And what really shaped his life, are locations rather than dates – Israel and Palestine, Tokyo, Fukushima, and Cambodia:

An emotional trip to Israel and Palestine in 2005 left a big impression on the idealistic young man, and he started keeping and publishing travel journals to share his impressions. At some point he began illustrating those with photos. Meanwhile he kept working as a photographer in entertainment and sports.

In 2008, a café in Paris offered him space to display his photos. Thinking to himself, “This is a great opportunity… probably the only one I’ll ever have to exhibit”, he went for it. It was a success, and the impetus to turn his passion into a profession.

A visit to Tokyo in 2009 would prove to be the pathway into that professional career as an art photographer. The swirling, frenzied city of dazzling lights around the clock inspired him to find a way to capture the craziness of the megalopolis and the loneliness of its citizens … and he found a way to do so by superimposing two photos taken in the Tokyo subway, of the train and its travelers. It turned out so well that this type of photography would soon become his signature. 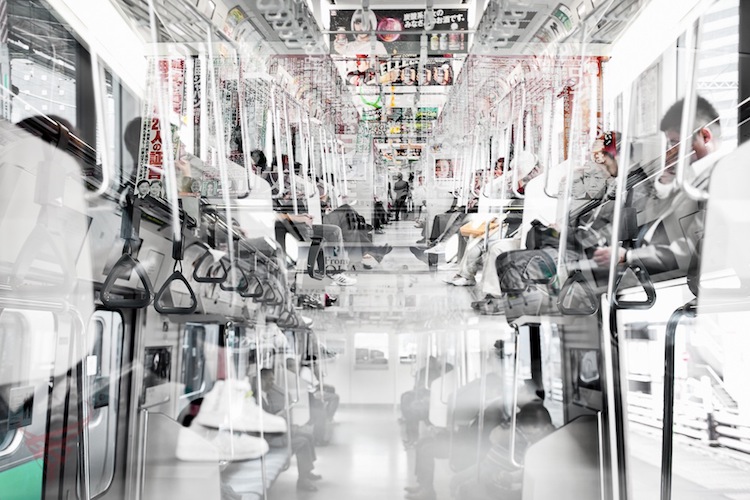 On his next visit to Japan – and in fact to Fukushima, just one month after the 2011 reactor catastrophe there – he found a country that had profoundly changed. The Japanese were beginning to awaken to the consequences of boundless, unchecked use of nuclear energy. As a consequence, the garish lights all over town were dimmed, and the mood had become much more somber and sober.

This was when the Hurban Vortex project started taking shape in the artist’s mind. “Hurban Vortex is an urban adventure with a big H”, he explains, the constant game between the concepts of humanity and urbanity, extending into notions of modernity and identity, future, sustainable development, ecology and economy. The City, symbolizing Progress and Modernity, in constant growth, now become a “megalopolis”, or a “City-world”, a space built by humans to live in but one that eats them up in return. 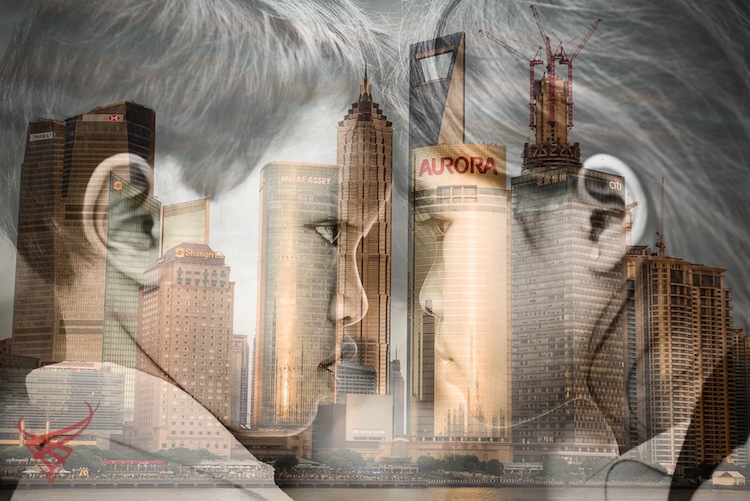 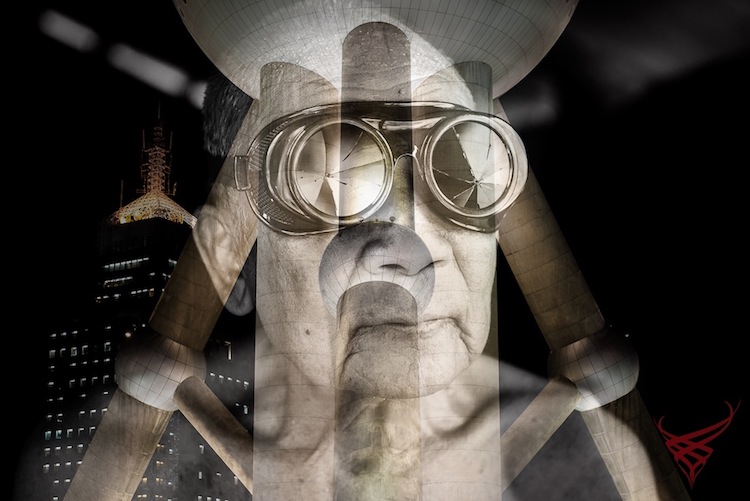 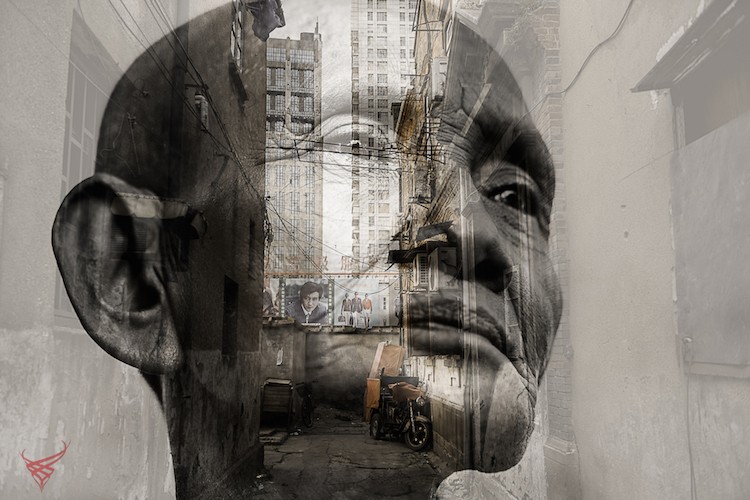 For this project, and forever drawn to Asia, Boris Wilensky returns to Tokyo, Shanghai and Bangkok to take as many “photographic backgrounds” as possible. Then he tours Cambodia for two months, the stark contrast to the other cities’ modernity. Here he immerses himself fully in the ancient Khmer culture, taking portraits of men, women and children. Many of those faces bear silent witness to the horrors of the Khmer Rouge regime, and yet retain pride and dignity that speaks of inner strength. 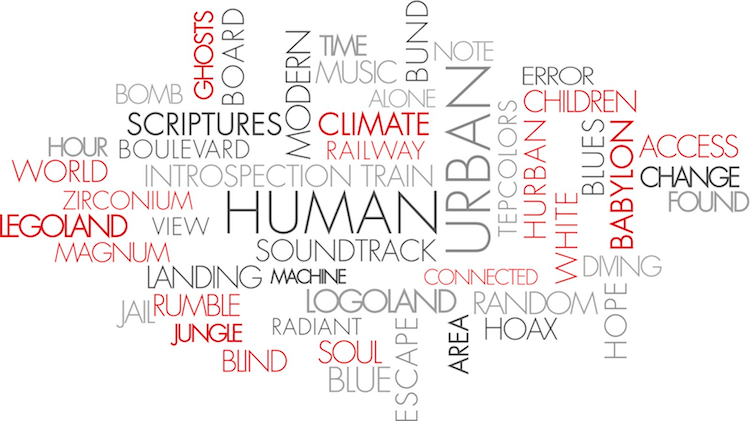 Over 15,000 photos later, Hurban Vortex sees the light of day. The ensemble of artistic, esthetic and human adventure are at the core of the triptych that represents his works: Origins corresponds to 2009 (present), the period of an oblivious, profligate, consumerism-driven world. Collapse takes us into 2011 (future)…Fukushima, with its worldwide impact. The glasses and gas masks worn by the humans represent the man-made destruction of a world as we had known it before and which will never be the same. And in Post we find ourselves in an urban landscape filled with waste and shattered ruins. But people are no longer wearing their blinders… Maybe there is hope after all that cities may disappear but humans are still around? Or does the urban jungle always win in the end? You decide, because it is your personal interpretation, after an intense dialogue with the image… exactly what Boris Wilensky wants. 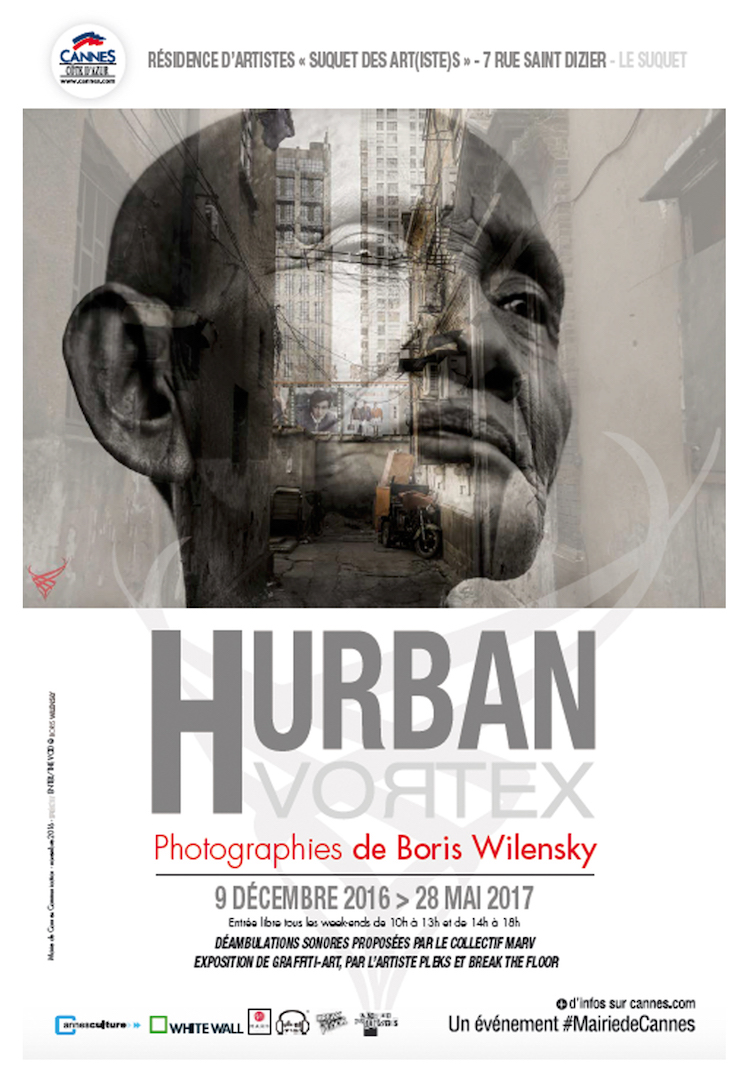 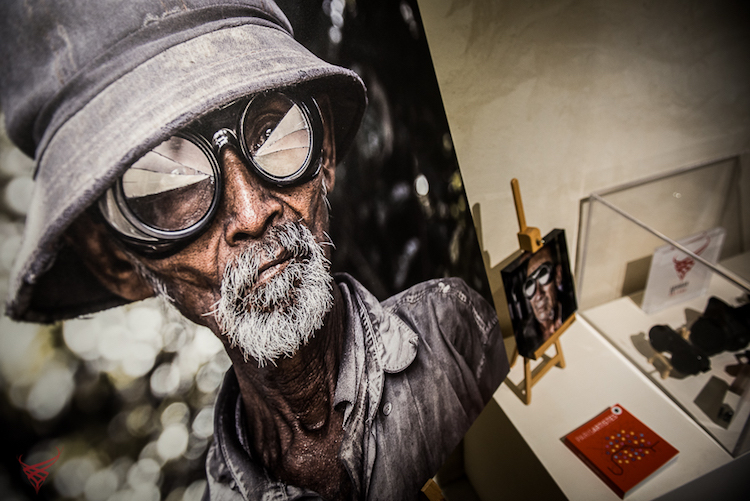 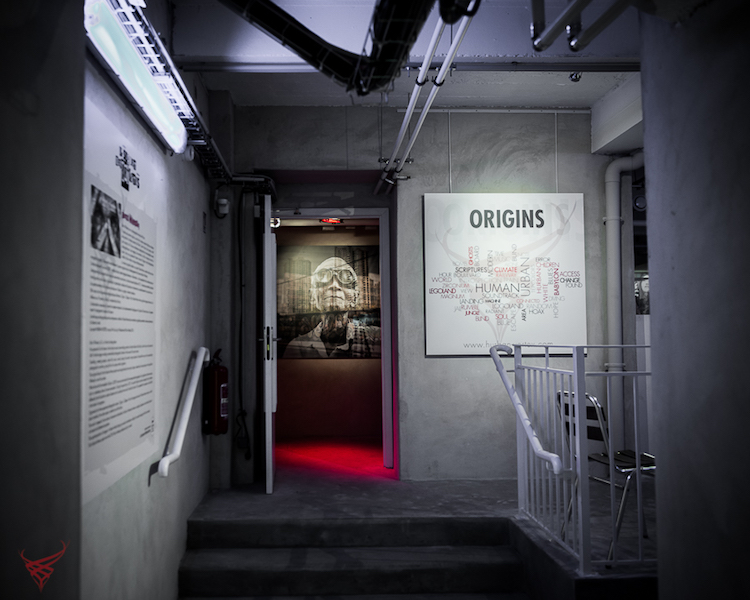 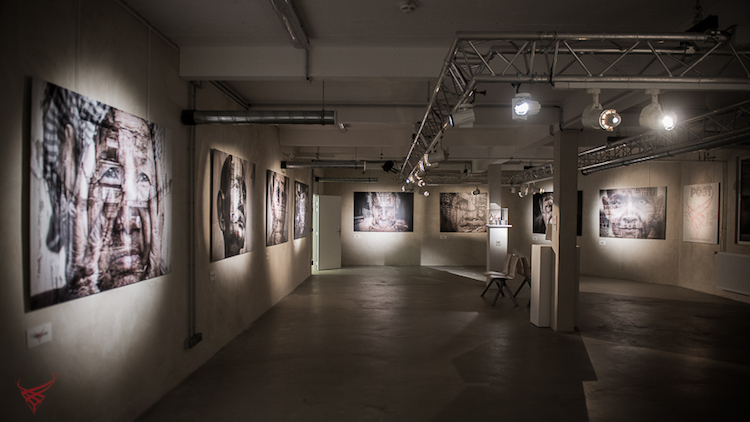 What the viewer sees, is how this artist sees the world – not in the literal but figurative sense. But he does not dictate, he suggests. He considers himself a storytelling portraitist first and foremost, and an urban photographer second. As you look at his large-size pictures (180 x 120 cm), the image in front of you transforms from a flat canvas to a three-dimensional scenography. You are drawn in, pulled onto a stage, you become part of the performance, an actor engaged in a dialogue. You are the person across from the man in the photo, but you also become him, turning outward to the viewer. The continuous movement – the vortex – pushes and pulls you as the borders between Human and Urban blur and become Hurban. There are violently cold and anonymous city landscapes, consisting of monochromatic and starkly geometric patterns, entirely unlike anything you find in nature. But the human element, superimposed, invariably bestows them with a strangely appealing aesthetic.

“Our urban environment – which we created ourselves – is about to eat us. We have gotten to a point where reflection matters,” Boris says. “I love that word ‘reflection’, with its double meaning…. Reflecting about something in your mind, but also mirroring back to the onlooker”. Words matter greatly to him, which is also why three tableaux bearing word clouds connected to Origins, Collapse, and Post are also part of the exhibition.

Before the City of Cannes brought Hurban Vortex to town, it was on display in Seoul and Paris, winning the prestigious Professional Parisian Artists Jury Award in 2016. It is extremely hard, if not impossible, to capture the full impact of this immensely powerful exhibit in photos or even a video. The vault-like setting and the sound track with hip hop notions add yet another dimension to the ambience. It is one of those events you simply have to experience for yourself to fully appreciate. You can still do so at the Suquet des Art(iste)s in Cannes until May 28, 2017. When the artist is present, he will be your friendly and very approachable guide through the gallery, otherwise there are audio guides available. If you really cannot make it, at the very least order his exquisitely curated coffee table photography book with the eponymous title. Boris Wilensky is at the brink of an international career, and we would not be surprised to see his work in leading modern art museums around the world in the not too distant future.

All photographs copyright and courtesy of Boris Wilensky