Ten years after the US premiere of “Disgraced”, one of the most important contemporary plays, Daniel Benoin directs the French adaptation and a star-studded cast led by Sami Bouajila

September 11, 2001 was a turning point in history. After the terrorist attack on the Twin Towers in New York City, the delicate but relatively peaceful relations between the Western and Muslim worlds that the past century had brought about, would never be the same again. Bitter wars ensued that were labeled “revenge” but soon turned into much larger ideological fights over religious values and cultural dominance, showing that Humanity had learned nothing from its destructive past. Not even dinner tables around the world have been spared from heated debates.

In 2012, Pakistani-American playwright Ayad Akhtar penned Disgraced, a play that examines the frail and precarious social ties that bind individuals of different backgrounds together. Critics hailed it as one of the most important plays of the decade, and a year later the author won the coveted Pulitzer prize in the Drama category. Now, Daniel Benoin, director of Anthéa theatre in Antibes, tackles the story and reinterprets it, giving it an additional layer of flavour in the light of social relations over the past decade. Disgrâce plays at Anthéa Théâtre d’Antibes from April 26 through May 14. 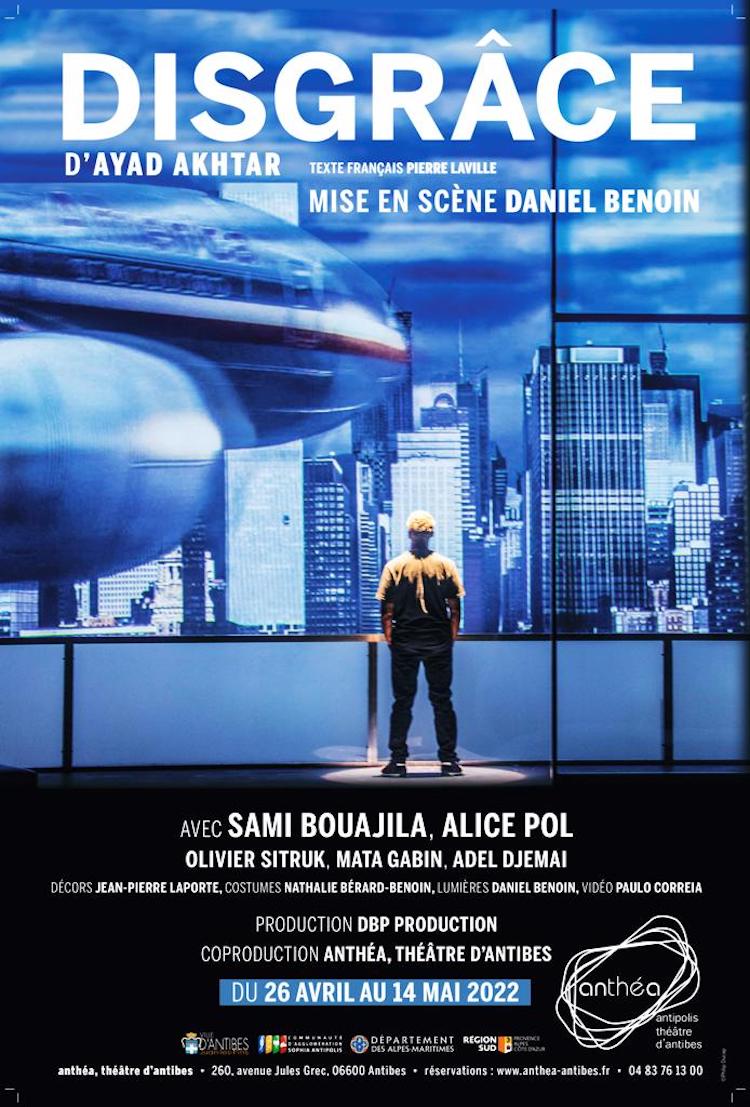 The story: Amir, a prominent lawyer at the New York bar, has rejected his Muslim heritage in order to pursue a career in a largely Jewish environment. He is married to a beautiful, blonde, middle-class artist Emily. He is retained to defend a local imam accused, probably wrongly, of financing terrorism. But the question of Amir’s political affiliation is raised in the press…

The play takes place during a dinner with the couple hosting their friends, Jewish art curator Isaac and his African-American wife Jory. What is supposed to be a pleasant evening, degenerates into a violent confrontation around the themes of ethnicity, religion and politics in modern America, from which Amir and Emily will not escape unscathed…

“I have been trying to stage this wonderful play, which is so representative of the tensions in the world today, for several years,” says Daniel Benoin. ”For me, it is a form of return to a theatre that is immersed in the contemporary world and looks at it with acuity and without complacency.” After recently obtaining the rights, he succeeded in casting multi-award-winning actor Sami Bouajila in the lead role, along with a talented intercultural cast consisting of Alice Pol, Olivier Sitruk, Mata Gabin, and Adel Djemai.

“This play tells the story of a character who has a difficult experience: losing his religion, his community, but still feeling connected to that past and to those people. To feel a deep love for that past but to feel like you are not part of it. This is the story I wanted to tell”, author Ayad Akhtar muses. He knows firsthand what he is talking about: born in New York City into a Pakistani-Muslim family, and raised in white-mainstream Milwaukee, Wisconsin, he had always juggled two identities. He was 30 years old when 9/11 happened. This forced him to take a good long look at who he was – was he an American, identifying with American ideals, or was he more closely aligned with his Pakistani-Muslim roots? 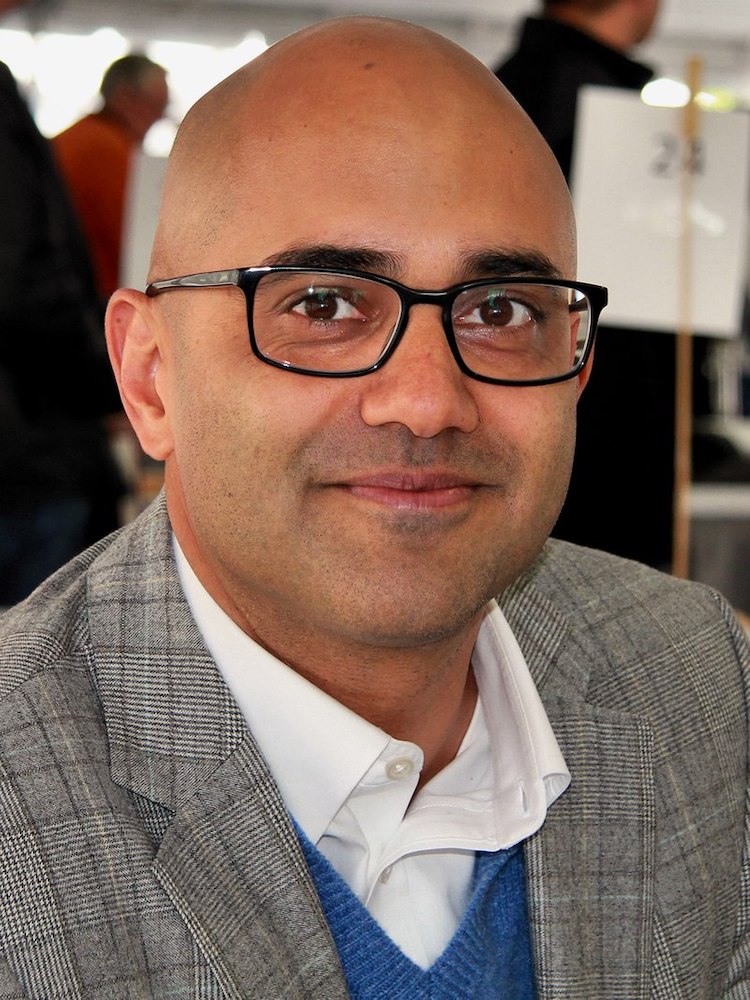 Translating a play so finely attuned to cultural differences within one country that understands itself as multicultural but often struggles with the concept is no small feat But Pierre Laville, a renowned author in his own right, did an extraordinary job not only taking words from one language into another but also bridging the gaps in US/French contextual understanding. It worked because, according to him, “the play goes beyond decorum and the unspoken. It escapes religious doctrine because each character defends his or her point of view, in a non-intellectual way, just based on their own experience, whether Muslim or Jewish, black or white, male or female.” But that, inevitably, leads to onto dangerous terrain.

As is so often the case, Daniel Benoin’s direction is expertly supported by Jean-Pierre Laporte’s  imaginative scenography – typically restrained and somber but always powerful. And the immensely talented Paulo Correia, co-captain of Anthea’s house company Collectif 8, is once again in charge of the videography, and as any theatre lover knows by now, that in itself is a guarantee for yet another masterpiece. All in all, a play worthy of the second most important House in France after the Comédie Française in Paris. 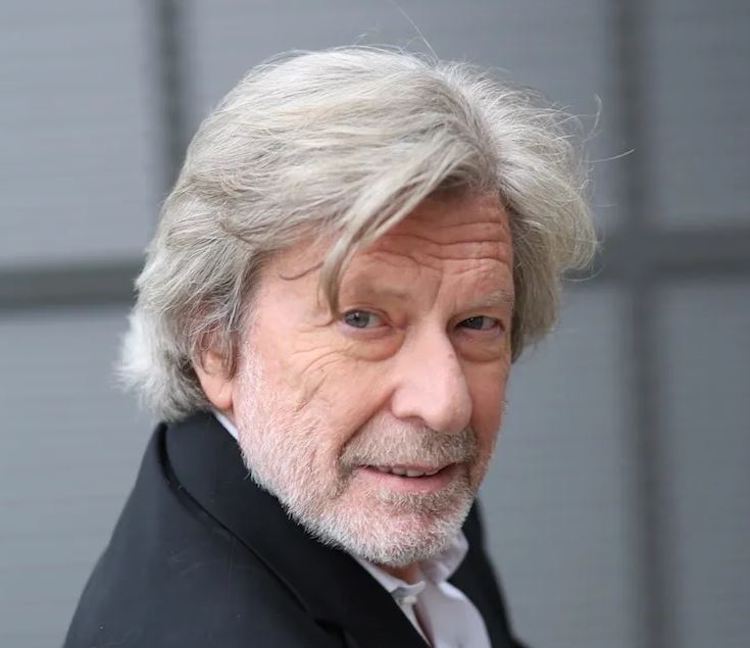 Bringing this important play to Antibes underlines once more Daniel Benoin’s visionary qualities as a director not just of a theatre like Anthéa but of top-of-the-line plays. Well into his 70s by now, the renowned director he just does not show any signs of slowing down… if anything, he keeps getting better and better all the time. After the Théâtre National de Nice’s recent slip into municipal banality, Benoin is the one torch bearer of great theatre in the South East, and definitely among the Big Five in France. 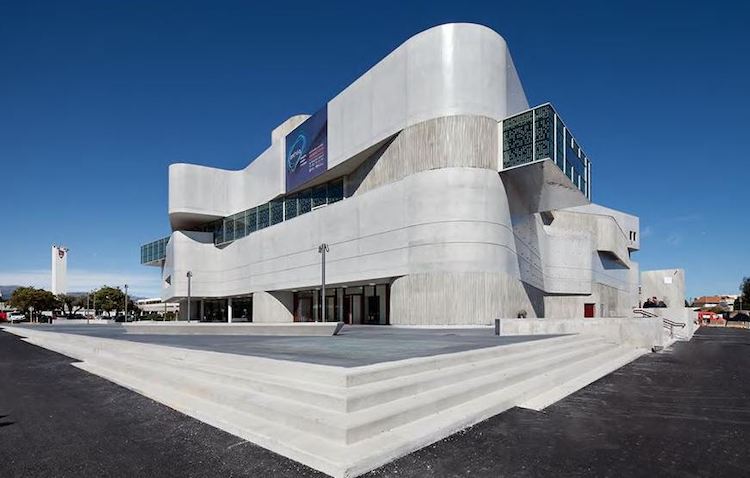 For more information and to book tickets, please visit the anthéa website.