All is well that ends well: After the long and involuntary hiatus, the disrupted 2020/21 theatre season goes out on a high note.

No one will argue with the validity of healthcare measures in a pandemic but for theatre actors and directors these past months of forced closure were sheer torture. Apart from the severe financial hit every single artist, company, and house had to take, not being able to play was tantamount to depriving them of oxygen, and the same is true for theatre lovers.

But now the restrictions are finally about to lift, and trust Daniel Benoin, founding director of Théâtre Anthéa in Antibes, to make up for lost time and inject an extra dose of theatre mania into the cultural landscape. From mid May to the calendared end of the 2020/21 season in early July, the second House in France after the Parisian Comédie Française presents a firework of shows that at least quenches some of the thirst for culture and entertainment. While a number of them is open to the general public (including the following ones described in detail), others are offered for free to season ticket holders only.

This Diderot play by Anthéa’s resident company Collectif 8 already created waves and raves when it first premiered in 2016. The two-actor play represents the ego and alter-ego of Suzanne Simonin, a woman caught up between what society expects her to be and who she really is. Gaële Boghossian and Aliénor de Georges bring to light the struggles of times gone by, which are in fact highly topical and more relevant than ever: indoctrination, keeping women in a state of ignorance, the objectification of an individual, and Suzanne’s virtual disappearance in the community she lives in. The label of a Christian nun is arbitrary; this might just as well apply to other groups of today’s society.

Choreographed by Philippe Decouflé, Shazam describes itself as “a time- and ageless dance phantasmagoria, an abracadabra of magicians and witches”. The spectator is invited to a breathtaking choreography that borrows from pantomime, circus, theatre, television, illusionism, painting and cinema, orchestrated like waking dreams in the manner of Méliès, to whom tribute is paid. Inspired by the likes of Tex Avery or the Marx Brothers, this enchanting show first premiered in 1997 in honour of the 50th anniversary of the Cannes Film Festival and has since lost nothing of its originality.

Like their peers of Collectif 8, Félicien Chauveau’s Collectif La Machine has established a reputation as fine connoisseurs of European classic literature. After last year’s big success with Sherlock Holmes, the indefatigable Niçois company now tackles another Anglo-Saxon masterpiece set in London at the end of the 19th century: Dr. Jeckyll, a physician known for his philanthropy and virtue, secretly struggles with strong evil tendencies and is forced to lead a terrible double life.

Beyond the adaptation of the famous novella, director Felicien Chauveau examines its author Robert Louis Stevenson’s creative process by bringing him back to life as a character and as the master of his puppets.

The memory of Imany’s first concert at Anthéa in late 2015 is indelible. For the past ten years, the beauty of her voice and her compositions inspired by soul, folk and blues have touched the heart. French of Comorian origin and born in Martigues, Imany studied in New York and found models in Tracy Chapman and Tina Turner. In collaboration with Macha Makeïeff, she has embarked on a brand new project that is a tribute to the great melodies and texts in praise of the power of the feminine. Voodoo Cello revisits standards from Bob Marley to Donna Summer, from Cat Stevens to Radiohead… harmoniously blending the low notes of a voice with the strummed strings of the violin-cello, that friend of the soul.

In this award-winning one-man show comedian Sami Bouajila brings to life Émilie Frèche’s poetic and inspired text, which sharply focuses on the destinies shattered by the history of Algeria and France. He slips in the role of a lonely man, dispossessed of everything, a prince… The city has relegated him and others to a peripheral no-go zone, and he has pitched his tent there. From now on, he has nothing else to do but try to put his unfinished story in words. Knowledge only comes from this quiet journey. Ghosts appear, in particular that of the father. How to choose between betrayal and fidelity to the memory of this heritage that haunts him? A poetic quest to find a lost paradise where everything is at peace.

There may well still come a few other surprises, according to Daniel Benoin, so keep an eye on the theatre’s website  and social media pages for ad-hoc announcements. 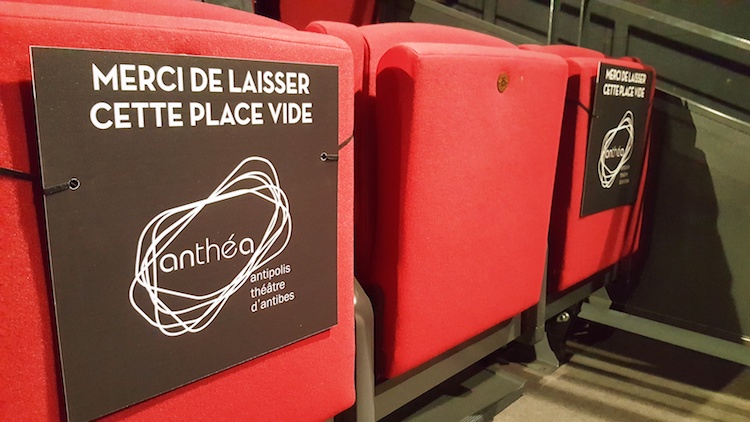 To book tickets for any of the accessible shows (or to request a refund for a cancelled show), contact Anthea’s online reservation service. Please note that the capacity has been reduced to 35%, so do book early.

Shows begin earlier than usual to accommodate the curfew in place, check for curtain times at the time of booking. The theatre bar and patio on the fifth floor are open from 18 h until 22.45 h.

All mandatory sanitary measures (masks, gel, distancing) apply throughout the entire visit to the premises.