Prepare to be reintroduced to the Principality with ‘Monaco le Spectacle’ presented by Cirque Éloize, coming to Nice this November.

The Principality of Monaco is known around the world for its casino, its F1 Grand Prix, its glamorous lifestyle and its scenic beauty among many other things. And now thanks to the creativity and artistic vision of the Montreal-based troupe Cirque Éloize, all those symbols will be brought together to create a unique and spectacular live show; the first ever about an entire country.

Directed by Krista Monson, who has over the years worked with the Cirque du Soleil and orchestrated more than 40 shows in Canada and the United States, including the opening and closing ceremonies of the 1996 Olympic Games in Atlanta, Monaco le Spectacle (Monaco the Show) will follow a certain François as he discovers the tiny Mediterranean country to literary immerse the spectators into the life of the Principality as soon as they step inside the theatre.

The music is composed by René Dupéré, the man behind the famous piece Alegria for the Cirque du Soleil, while Debra Brown, who has previously worked with the likes of Madonna and Céline Dion, is charged with the choreography.

The Cirque Éloize, like Canada’s other famous circus act, the aforementioned Cirque du Soleil, knows a thing or two about putting spectacular shows and for this new creation, they will as usual combine impressive dance numbers with top levels acrobatics performed by 35 musicians, dancers, theatre actors, and even a multi-instrumentalist magician who will serve as a tour guide for the main character. 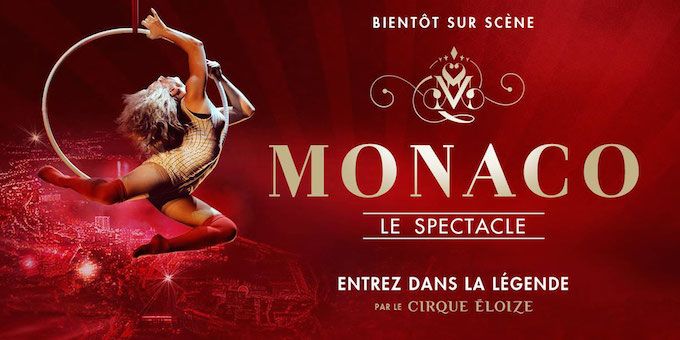 After a few dates in Brussels, ‘Monaco le Spectacle‘ will have its world premiere in Paris on the 1st October, where it will play for 6 weeks. It will then be shown in 11 French cities, including Nice, before taking on the world. No doubts that people all around the globe will be seduced by this unprecedented experience, which has already received the royal seal of approval from Prince Albert!

‘Monaco le Spectacle’ will be performed at the Palais Nikaïa in Nice from the 18th to the 21st of November at 8:00 pm. Tickets range in price from 26 € to 79 € and are on sale at all usual outlets.