Loving Vincent, the movie which has been sweeping streets the world over for months, is finally set for general release in France

On 27th July, 1890 a gaunt figure stumbled down a drowsy high street at twilight in the small French country town of Auvers, his hands clasped to a fresh bullet wound leaking blood from his belly. This was Vincent van Gogh, then a little known painter, now the most famous artist in the world. His tragic death has long been known – what has remained a mystery is how and why he came to be shot. Loving Vincent tells that story. The world’s first fully painted movie explores the artist’s life and work, and the world seen through his own eyes, by animating some of Vincent van Gogh’s most inspirational and emblematic paintings.

Vincent van Gogh’s Starry Night, Café Terrace at Night, Sunflowers, Wheatfield with Crows and indeed his own face in his many self-portraits are among the most recognised images in the world. He is, however, not only famous for his paintings, but also for his tortured life, notably for cutting off his ear and shooting himself while painting at his easel. Painting to the bitter end of his unhappy misunderstood life, he is the world’s quintessential ‘tortured artist’. Loving Vincent explores his life and work, and tells his story by animating some of his most inspirational and emblematic paintings. 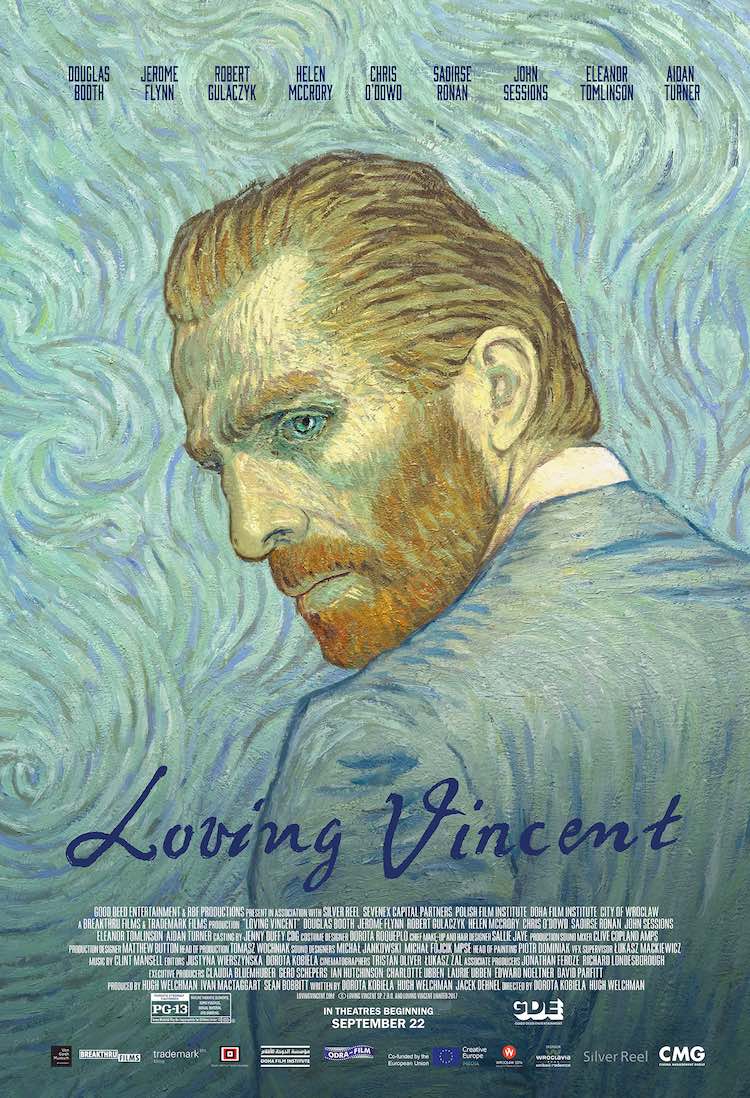 After its world premiere at the Annecy International Film Festival in June 2017, the movie has screened around the world to resounding success, earning numerous awards. Renowned Seattle International Film Festival critic Tony Bancroft, an accomplished master of animation filmmaking himself, sums up what everybody else is thinking, “Never has there been a film that spoke to the heart of an artist like “Loving Vincent”. Animation and fine art painting come together in this loving tribute to the work and life of a master artist.” The movie is now finally coming back to France for a tiered release under the title “La Passion Van Gogh” (check here for a theatre near you)

“We cannot speak other than by our paintings.”
— Written by Vincent van Gogh in a letter the week before his death

“The reason we made the film is not because we want to be the first, or that we want to set any records, it is because we believe that you cannot truly tell Vincent’s story without his paintings, so we needed to bring them to life,” according to co-writers and co-directors Dorota Kobiela & Hugh Welchman. To create Loving Vincent, 65,000 frames were painted on over 1,000 canvases. Immersed in the works that would immortalize the Dutch Post-impressionist, the movie is animated by actors, shot against a green canvas. “This is a very laborious and time-consuming process. It has taken us 4 years to develop the technique, and it took us over 2 years with a team of over 100 painters working at studios in the Polish cities of Gdansk and Wroclaw, and a studio in Athens, to complete the film.”

Starring as Vincent van Gogh is Polish theatre actor Robert Gulaczyk. He bemusedly remembers how two years ago he received a phone call. Being told he looked like Vincent van Gogh – the first time anyone had ever mentioned this fact – he was asked to audition that same day for a lead role on an international feature film. Having spoken barely any English since leaving school, he was immediately whisked into costume and make up, and had to read out Vincent’s letters in English. Somewhat daunting…. but it turned out to be the start of a great journey of discovery into the life and works of Vincent van Gogh.

To accompany the movie, a flagship Loving Vincent exhibition opens at Noordbrabants Museum, ‘s-Hertogenbosch, Netherlands, on 14th October 2017, featuring 119 oil paintings from the film. The exhibition shows how the filmmakers re-imagined the paintings of Vincent van Gogh into the medium of film, using the very same technique, oil-painting, that the artist himself used.

“One day I would like to show by my work what this nobody, this non-entity, has in his heart.”
— Vincent van Gogh, letter to his brother Theo, 1882