Motorcycle lover and movie buff? There is only one place to be for you on the first weekend of March: Espace Magnan in Nice

The day Marlon Brando straddled his iconic Triumph Thunderbird 6T in the 1953 cult film The Wild One, a love story was born… that between motorbikes and celluloid. 65 years and hundreds of great movies later, it is still going strong. Numerous film festivals around the world celebrate the sexy two-wheelers and their freedom-loving riders. It is therefore somewhat of a surprise that no one in France had thought of creating one here.

Until now, that is. The first French Riviera Motorcycle Film Festival (FRMFF) is about to be inaugurated. On March 2, 3 and 4, the work of amateur and professional filmmakers from all continents will be featured in walk-in-any-time screenings, representing a well-curated selection of feature and short films, documentaries, and road movies. 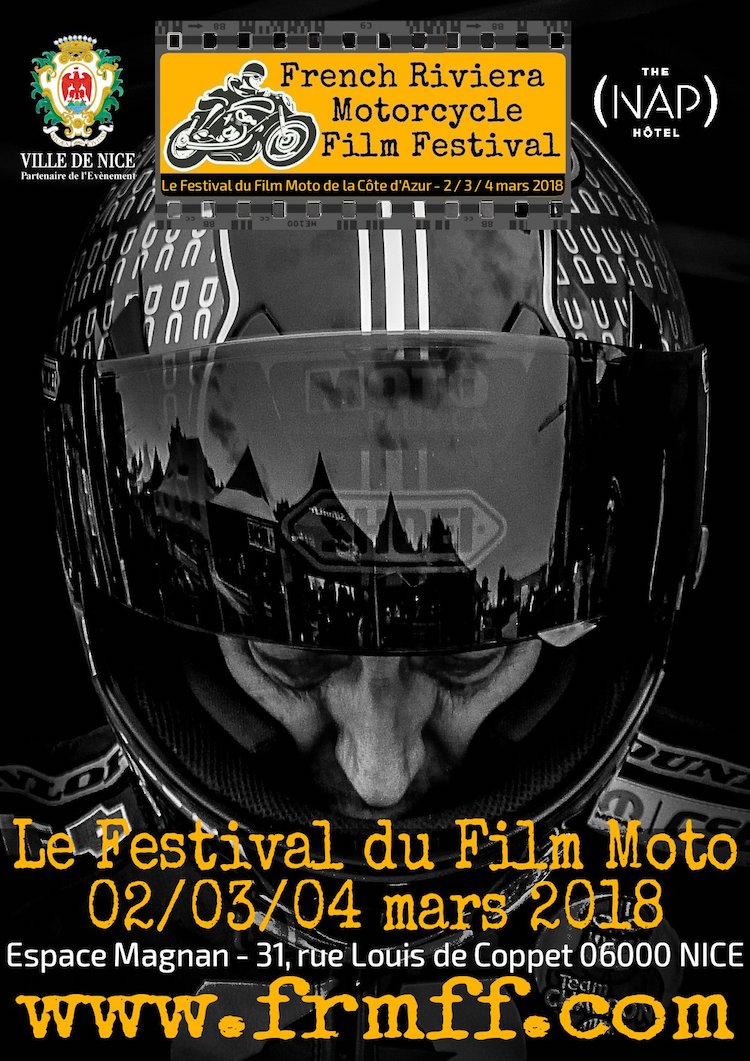 “Motorcycles are a powerful vector of freedom, whether it’s adventure, off-road riding, road racing or vintage bikes,” says FRMFF founder and president Olivier Wagner. “In addition to being a true motorcycle racing fan, I am a movie lover and amateur filmmaker. In fact, most of the movies I have made were motorcycle related. I decided to create this event because – having competed as a director in many international motorcycle film festivals – I have had the occasion to see great movies that nobody knows in France. My ultimate goal is to share all these movies with my motorcycle friends. And the best way to do so is to create my own festival because, to my knowledge, none exists in France.”

15 films will run in the official competition, three are shown out of competition. At the end, a professional and public jury will select the winning entries in the Best Feature Film, Best Short Film, and Audience Award categories. And among the professional jurors, none other than legendary American Grand Prix winner and three-time world champion Freddie Spencer, the undisputed idol of racers around the world.

“It is with great honour and pleasure that I will be the president of the jury that will judge the films at the French Riviera Motorcycle Film Festival. It is an honour because I feel our sport of motorcycling touches and inspires through visual and emotional ways in film and videos like no other. As a kid the great movie “On any Sunday” touched me and inspired me to dream and achieve on the track and off. So it is with pleasure that I look forward to seeing the films that will inspire the next generation of motorcyclist.” — Freddie Spencer

The festival’s spirit is intended to represent that of the biker community, based on fraternity, community of mind and the desire to share one’s passions. FRMFF visitors will therefore have ample opportunity to participate in post-screening Q&A sessions with actors and/or directors. “What interests me the most in such festivals as a director are not the awards but rather the opportunity to speak about passion and technique, both in the field of motorcycle and cinema. The French Riviera Motorcycle Film Festival was originally conceived with this desire,” Olivier Wagner states.

Four wheels move the body but two wheels move the soul, as the saying goes in the biker community. Whatever mode of transport gets you to Espace Magnan, this is an exciting new and high-caliber festival which after its inaugural edition from March 2 through 4 will surely become a staple on Nice’s annual festival calendar. And for all you riders out there: Enjoy the sun on your back, keep your two fists in the wind, and always remember: ATGATT!

PLEASE NOTE THAT TICKETS NEED TO BE PURCHASED ONLINE AS THERE WILL BE NO ONSITE TICKET SALE AT THE VENUE!

Please visit the FRMFF website for individual movie descriptions and trailers and for the daily schedule.

Out of Competition Movies

Lead image by Tony Lam Hoang on Unsplash; all other images courtesy FRMFF