One of the up and coming fashion trends for 2013 has taken root on our doorstep in Cannes. Say hello to Victorian Woman and Steampunk.

Coming up with fresh ideas is no easy feat. Just look at Hollywood’s re-imaginings of franchises of days past. Transformers 4, anyone? If, for instance, you were to imagine an alternate history of the Victorian era, one with all of the modern conveniences and technologies of today, how would it look?

Novelists such as Jules Verne were first to re-imagine said future, as Verne, often called the father of the sci-fi genre, even predicted the 1969 moon landing in his 1865 classic ‘From the Earth to the Moon‘.

Fortunately for fashion fanatics, a once small literary subculture of steam engine science fiction fans has recently morphed into what IBM’s Social Sentiment Index is calling the fastest-growing fashion trend of 2013. Enter Steampunk.

You would think the hyphenate “retro-futuristic” would be a contradiction in terms, but for the vastly popular Steampunk subculture, its nomenclature is spot on.

“Steampunk is a mix of everything. It is the art of making nice things with all things,” says Victorian Woman designer Manuela Biocca. “There are many elements that unify the Steampunk theme, but the elements of time, clocks and gears, those are the symbols. If we had to say one word – clocks.”

High school is tough for almost everyone. Unless you’re the star quarterback or head cheerleader, one can assume you struggled along the path to finding yourself just like the rest of us. What can help to survive the High School Hunger Games of mean girls, tough teachers, exams and embarrassments, is to identify and team up with a particular group or cultural subset.

Manuela Biocca found herself among the Gothic group from a young age. Always one to dabble in the arts, she discovered early on that she liked to make things with her hands, to give birth to art and to present that art to people in her community. What began as a gothic groupie mentality eventually manifested itself into a love of Victorian romanticism, generally, and its Steampunk subculture, specifically.

“For years I was in the Gothic movement,” the designer says over coffee in an equally Victorian-inspired café. “I dressed like that for many years, and I wanted to do something that was in harmony with what I am, with who I am.”

I run my hands over her haute couture corsets as she talks, feeling the luxurious silks, satins and brocades between my fingers. The corsets are heavy in my hands as they are fully boned with metal – flat pieces in front to keep the stomach set and spiral boning around the sides to assist the client in achieving that coveted hourglass shape. Biocca’s handmade elements invigorate the pieces and raise them to a level unlike any fashion pieces I’ve seen before. Suiting buttons, leather gears, tiger-eyes and sterling silver chains adorn the boudoir bodices, every detail catching the light and spotlighting her couturier character.

“The gothic movement has many branches,” Biocca continues. “You have everything – you have industrial, you have Victorian, you have punk. Steampunk is also a part of it, and it’s a very cultural movement. So it is based on an aesthetic theory of Romantic and dark literature.”

Of all the pieces Biocca builds – corsets, necklaces, handbags, bracelets, her pieces de resistance are by far her tiny top hats. “For the hats, I make everything, down to the base. I sew them and adorn them from Buckram fabric, which I can only find in England. It’s a kind of net, but very thick and hard,” she says. 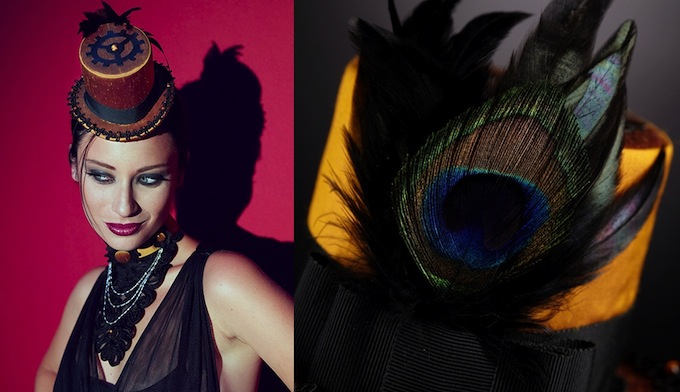 Once Biocca has sewn the hat together, she uses steam (irony, anyone?) to mold the pieces into shape, thereby creating the perfect topper to her Steampunky lady’s look.

The Steampunk design and production movement is drawing some criticism from its Belle Époque peers who fear this style encourages the destruction of antiques. Apart from the true artistes, there are always the Comic-Con-like conventioners who haphazardly tear apart beautiful antique artifacts for the sole purpose of fashioning costumes they might wear once or twice, just to taste the Steampunk past for a day or two.

However the retro-futuristic fantasy world has been represented in literature and film, this sci-fi subgenre has materialized into a full-fledged fashion movement that the IBM think-tank predicts will permeate the mainstream market by 2014. Here on the French Riviera, Biocca admits that the current market for Steampunk designs is small, but she sees prospective market growth to come.

She’s already ahead of the game as her collections are currently available at boutique MICHAT in Cannes and through her website. And you can stay up to date with all the latest Steampunk and other news on the Victorian Woman Facebook page. 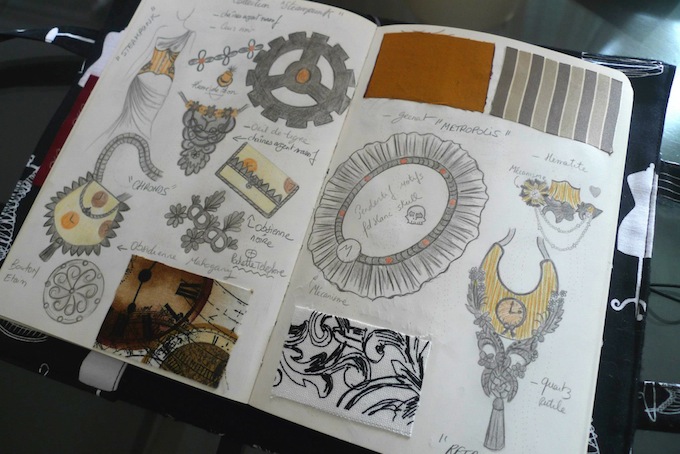