This September, amateur bike riders will be crossing half a continent to raise funds for the world’s endangered oceans.

Fourteen hundred kilometers, forty cyclists, ten days, three countries, two organizations, one terrific cause … and Prince Albert II of Monaco to welcome them: the first London to Monaco charity bike ride starts on September 18 at Tower Bridge in London with the ambitious goal of raising a minimum of £500,000 (which equates to €586,000 or $661,000) for two of the Blue Marine Foundation’s ocean preservation projects. The initiator behind this high-profile event: luxury yacht designer Winch Design, who has created this event to commemorate 30 successful years in business.

London, Folkestone, Dijon, Gap, Nice, and Monaco, those are the highlights of the grueling ten day tour during which 40 cyclists will cover over 1,400km. The opening stage will lead riders from the beating heart of London into the steep hills of Kent, and on to Folkestone. After crossing the Channel, the flat fast thrash through northern France will kick off in St. Omer. Next goals: Saint-Quentin, Troyes and Dijon. These stages form the longest part of the journey; what it lacks in vertical climbing it gains in distance. Dijon to Macon will show the final flat day of riding, before moving into the majestic Rhone Alps, toward Gap. A giant of a climb up to Col d’Allos is ahead, but from there on the finish line moves into view. The final stage will hug the coastline from Nice, dropping in to Monaco to a Royal welcome at the Grimaldi Palace. 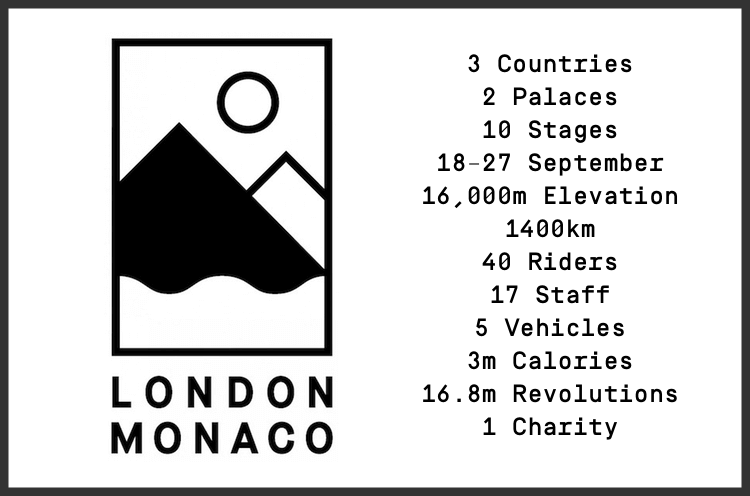 While the arrival in Monaco on September 27 coincides with the eve of the kickoff to the annual Monaco Yacht Show, the attention remains firmly on the cause the cyclists are riding for – extensive marine conservation and regeneration led by the Blue Marine Foundation (BLUE). For H.S.H. Prince Albert II, whose active involvement in the protection and preservation of the world’s maritime heritage is well-known, and who will greet the riders, it is therefore only natural to put his full support behind the project.

Oceans are more than ever at the heart of our common future, the reigning Monegasque monarch declares. “Although they are subjected to sustained pressures, they also offer infinite solutions and unparalleled opportunities, whether of an ecological or economic nature, energy or food related. Since 2012, my Foundation and the Blue Marine Foundation have made an important unified commitment to help protect the world’s oceans, with a number of joint initiatives focused on the protection and management of the marine environment. The first London to Monaco Cycle Ride is therefore a wonderful opportunity to raise awareness on the necessity to protect our fragile oceans.”

BLUE works to solve the crisis in the oceans through providing innovative solutions to overfishing and enabling the creation of marine reserves. Overfishing represents a major food security issue and has devastating consequences for the fragile biodiversity of our planet. BLUE’s aim is to put 10% of the world’s oceans under protection by 2020 and 30% by 2030. Monies will be raised through commercial and individual sponsorship, donations and partnerships. All funds raised will go towards two vital BLUE projects – the conservation and protection of both the Aeolian and Ascension Islands:

The beautiful Aeolian Islands to the north of Sicily are being threatened by overfishing and irresponsible tourism. BLUE will address these issues by building eco-moorings for sailing vessels so they don’t damage the sea grass beds when they anchor, monitoring and protecting endangered marine species such as sperm whales and dolphins, enhancing fish reproduction through site-specific protection/zoning and finally, reducing the number of ‘ghost’ nets (discarded nets which trap species such as loggerhead turtles).

The remote island of Ascension in the tropical Atlantic is home to some of the biggest fish in the world, sharks, turtles and rare sea birds, but was being plundered by long-line fishing. The UK government has just declared half Ascension’s waters protected from fishing, but the Ascension islanders rely on income from fishing licences. BLUE works to open up other sources of income on the island, particularly science and eco-tourism so that 100% of the island’s waters (nearly twice the size of the UK) can become a marine protected area. 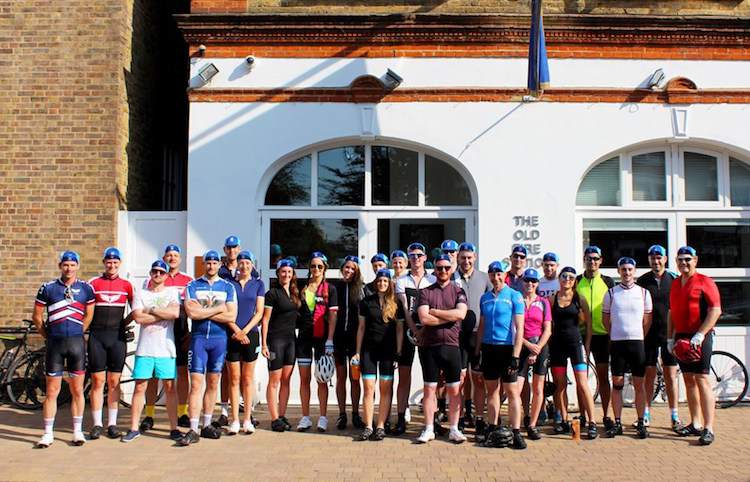 Winch Design, the initiator of the event, has a longstanding relationship with BLUE, and has supported the charity through smaller initiatives in the past. “I’m passionate about the oceans and know that we must ensure the future of our seas,” founder Andrew Winch explains his motivation behind the cycle. “As a great supporter of BLUE, I want to make a real contribution to their wonderful work in celebration of our thirtieth year in business. The entire team at Winch Design is inspired to do their bit to help and I hope people within our industry will get behind this event to show their support for BLUE and do their bit for the environment.”

Many prominent BLUE ambassadors like actress Sienna Miller and business tycoon Sir Charles Dunstone, as well as numerous corporate sponsors have already heeded Andrew Winch’s appeal, pledging their support of this project, and by extension the work of BLUE. You, too, are invited to participate, and there are many ways to do so: either by joining a leg of the ride, cheering at the sideline, sponsoring the effort through the crowdfunding platform that has been set up or donating directly to the Blue Marine Foundation. If you would like to get involved in the event in any way, there is still time to do so – please get in touch with Jimmy Carroll, Head of Marketing and Communications at Winch Design by email.

We’ll see you at the finish line, right?

All images courtesy London to Monaco