Canadian veterinarian Dr. Uri Burstyn has become a worldwide internet sensation thanks to his wildly successful YouTube tutorials starring him and his cats

That cats are huge social media stars is old news. But take a cute cat and a handsome, affable vet who explains the mysterious world of felines in layman’s terms, and put them in a video together, and you got a recipe for breaking the internet. And this is just what happened when Dr. Uri Burstyn burst… no pun intended, of course… onto the YouTube scene in 2017 with his How-To tutorials, accompanied by his three adorable cats Clawdia, Mr. Pirate and Lancelot. Millions of views later, he and his purr machines are a phenomenon known around the world.

To answer a couple of frequently asked questions right off the bat: Yes, Dr. Burstyn does exist, and yes, he is a bona fide vet with a great academic track record, not an actor. Oh wait … he is also an actor, but more on that later. In his videos, Uri – also known as The Helpful Vancouver Vet – addresses questions every person owned by a cat has, from spotting signs of illness to pilling their furballs, trimming claws, brushing teeth, or keeping them on a healthy diet. And he always demonstrates on one of his “patients”, i.e. his own, astoundingly cooperative cats. Every now and then a dog makes a guest appearance but hey, canines have a long way to go to reach the popularity of their feline cousins.

Ever since he first appeared in his videos, Uri has amassed followers that turn many a pop star green with envy. 10 million clicks per video are not unusual. By now, his videos are so popular, they are even subtitled and run internationally.

What is it about this charmingly unscripted guy in his trademark striped shirt (and dare he ever wear another one, his fans would be up in arms!) that makes viewers beg for more? It’s really just that – his casual style that takes the fear out of Veterinese, and that makes us all feel okay with doting on our cats, because he is just as gaga over them. And if there is one defining slogan, it’s his “squish that cat” quip which slipped out quite accidentally in one of his videos and has since become synonymous with Uri Burstyn’s name. 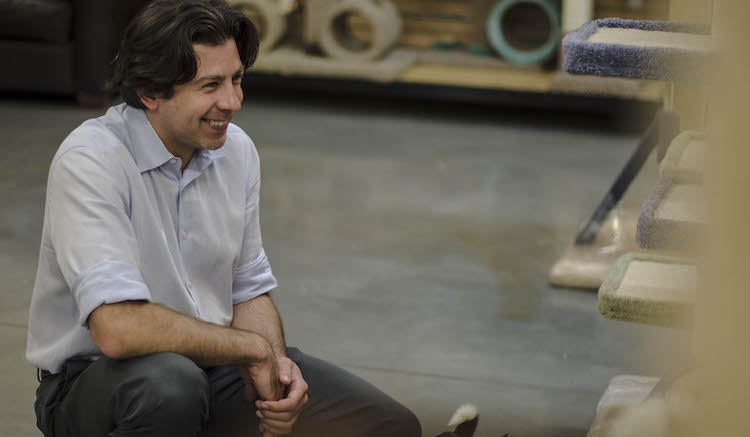 So, who is Mr. Squish-that-cat? A quick rundown of his bio tells us that he was born in Kiev, Ukraine, and his family immigrated to Canada when he was 8 years old. He grew up in a small town in central British Columbia. Although there always were pets in his childhood home, becoming a vet wasn’t written in the stars … like all good little Soviet boys he wanted to be a soldier as a kid. “Then I wanted to be a scientist, I remember being quite conflicted about this when I was 5”, he tells us with his characteristic sense of humour. But somewhere along the line he was also bitten by the acting bug. “When I was in high school I did all the theater and drama classes. I loved acting!” His love of science, chemistry, and biology eventually won out though and sent him in the direction of scientific training.

He didn’t decide to pursue veterinary medicine until he went to university in Vancouver, B.C. After graduating from UBC, he went on to graduate with first class honours from the Faculty of Veterinary Science at the University of Sydney, Australia. During his studies he jobbed as a veterinary technician in the emergency room of a specialty hospital, and after graduation he worked as an emergency/critical care doctor, pursued advanced training through a rotating internship in internal medicine and surgery, and was a research scientist with an orthopedic surgery laboratory at UBC. He was, and to date still is, the first and only veterinary surgeon in Western Canada to offer minimally invasive surgery on a routine basis. So – a solid career with all the framed credentials a wall can hold. This also makes him a sought-after expert on Canadian TV shows.

The owner of two successful vet clinics by his early 30s, this overachiever soon felt he had already accomplished almost everything he could do as a veterinarian. Looking for new horizons, one fine day Uri went to a drop-in acting class on a lark and remembered how much he loved the craft of acting. “From there I took more screen acting and scene study classes, worked on a couple of student films, and next thing you know I had an agent and was booking gigs on TV. Right now, I’m like most working actors in Vancouver – I audition regularly, act occasionally and have a day job. Just my day job is a little different from most!”

While he adamantly declares to love “vetting”, acting is an ambition for him. And it’s fun, he says. “Most actors will tell you that acting is actually more of an addiction than a job and they are not wrong, but it is a healthy and rewarding addiction.” This year alone he appears on Netflix’s new SciFi show “Away“ and “The Arrow”. But not to depend on film directors’ calls alone, the vet-slash-actor started making educational and entertaining YouTube videos as a great overlap of the two trades, living his best life by combining his on-camera skill and his professional knowledge to share something of value with people. And he manages a whole gamut of social media platforms. 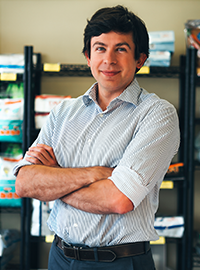 Looking at this bundle of entrepreneurial energy that just turned 40, you wonder how in the world he juggles regular 50 hour doctor shifts with being an actor … and is he making those famous YouTube videos when he should be sleeping? What gives him the force to power on? Uri replies with an anecdote, “A few weeks ago, at a party, an acquaintance told me that their friends, who live in Oregon, saved their cats from a house fire by putting them in pillowcases and running out of the house because they saw me talk about this in my viral video. This made me so happy! To think that I helped some people and their cat far away have a happy ending to their story is really great.”

Knowing that people enjoying watching Uri’s educational videos and are benefitting from them is a huge motivator to keep making them. “It is well known that people often have a hard time remembering more than about 40% of what is said at a doctor’s office, and there are some things that are so common that I repeat them four or five times per day,” he says. It helps people to learn without the stress of being in a doctor’s office, in their own time.

While people happily listen to his advice, they tuning into the shows just as much for his cats and their antics. Uri frequently talks about their history and even dedicates whole episodes to them, much to the delight of his and their adoring fans. Lancelot dropped in his lap ten years ago as a problem cat that has since been successfully rehabilited, and two year old Clawdia is the most recent addition to the good doctor’s ménagerie. And in this recent video we learn the back story of how Mr. Pirate finagled his way into the life of then 22 year old vet student Uri in Australia:

If you live in the Vancouver B.C. area, you may book appointments with Dr. Burstyn and his fellow practitioners at the Arbutus West Clinic or the Vancouver East Veterinary Clinic for your cat, dog, iguana or any other domestic pet. Otherwise, subscribe to The Helpful Vancouver Vet’s Youtube channel to learn all about cat and dog care in a fun, friendly, and playful way. We guarantee it’s fun to watch even if you don’t have a fur baby.

I would just like to thank everyone who supports my videos, whether it is by sharing them, commenting, subscribing, or joining my Patreon creator page. I try to make most of my videos in a way that will allow them to be used as educational tools by other veterinarians, vet schools, animal shelters, or really anyone who works with animals as well as being something pet lovers can do at home to make their own and their pets’ lives better. – Dr. Uri Burstyn