You know the song, “I lost my heart in Heidelberg”? Hold on tight to yours when you visit one of Europe’s most romantic towns.

Heidelberg. It’s one of those places circled in red and highlighted in yellow, with an extra exclamation mark next to it, in every American or Japanese tourist’s guidebook. And rightly so. The small town of 140,000 on the banks of the Neckar River, just a short hop from the French border, is synonymous with German baroque architecture, romantic literature and philosophers, and sweeping, bucolic views of the adjacent hills of the Odenwald forest. But there is so much more to it…

The town’s history goes back – way back actually … as far as Homo Heidelbergensis whose skull was discovered nearby. Dating back to between 600,000 to 200,000 BC, these are in fact the oldest humanoid remains found in Europe to date, and you may safely assume that this fellow was not alone but lived in what may have been the first prehistoric settlement in Central Europe.

Fast forward a few hundred thousand years to the much-more-recent Celts who built a place of worship here a mere 2,500 years ago, followed by the Romans who set up a permanent camp which they occupied for several centuries until German tribes drove them out in 260 AD. 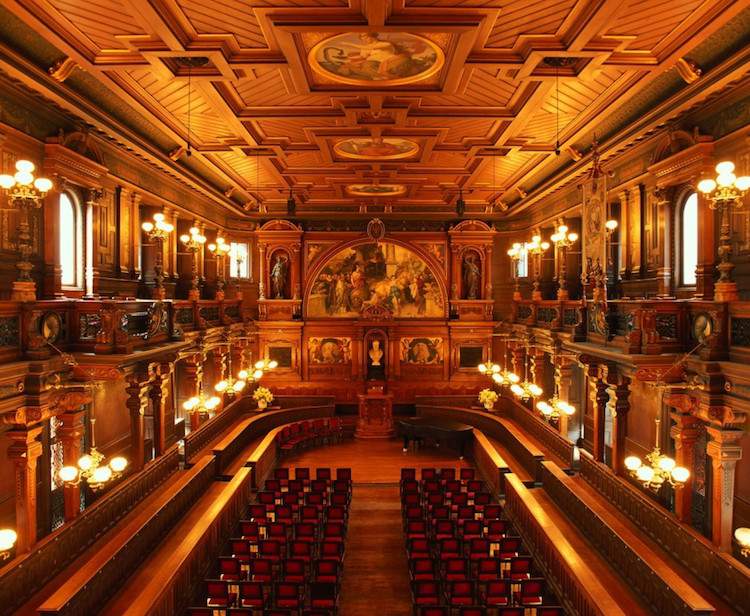 The town in its current form can trace its beginnings to the fifth century CE. The University – to this day one of Germany’s leading educational institutions – was founded in 1386, and it played a crucial part in the era of humanism and the Reformation, and the conflict between Lutheranism and Calvinism, in the 15th and 16th centuries. Heidelberg’s library, founded in 1421, is the oldest existing public library in Germany. In April 1518, a few months after proclaiming his 95 Theses, Martin Luther was received in Heidelberg to defend them.

This eventful history is still palpable all across town. Having had the great good fortune of escaping heavy Allied Troops bombing during World War II, the part now known as Old Town – featuring the university and the nearby 16th century market place – has been lovingly preserved almost in its original shape. The crooked facades of medieval houses, huddling together along narrow streets, are ornate and colourful, frequently making a statement as to what they used to be … a centuries-old inn maybe, a tavern in the former Jewish district, or a bakery that has been around forever.

As soon as you step away from the somewhat touristy Old Town main shopping street – home to more bars and cafés than you can count – you find yourself in tiny little alleys adorned with vines climbing overhead and cats hanging out, enjoying the spring sun. Time has stood still here. 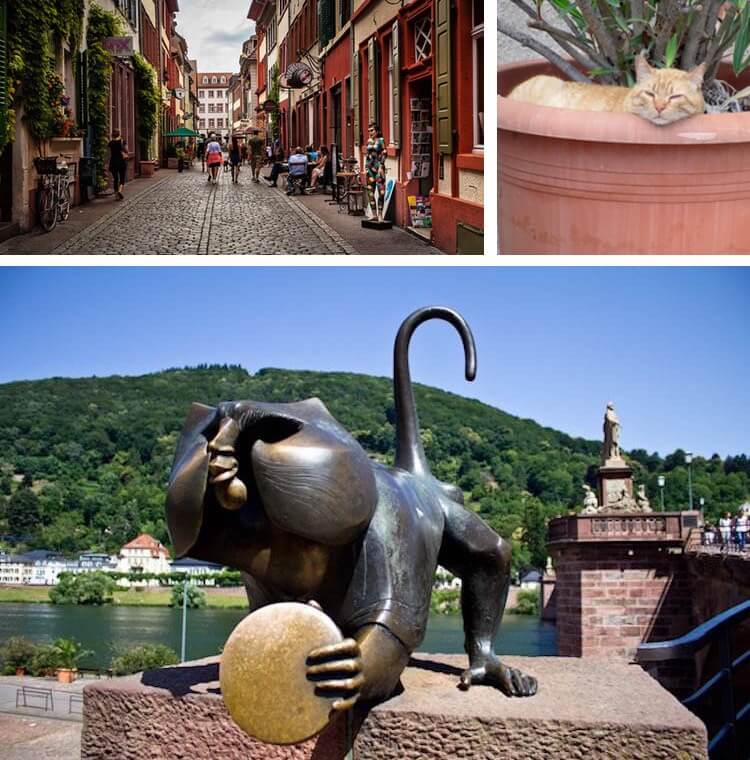 As you leave Old Town through the stunning Old Bridge Gate, don’t miss the whimsical bronze monkey who is holding up the mirror of truth.

The inscription at the monkey’s feet which is said to go back to a 17th century poem, reads:

“What are you gaping at me so?
Didn’t you see the old monkey of Heidelberg?
Look around
Maybe then you will find more of my equals.” 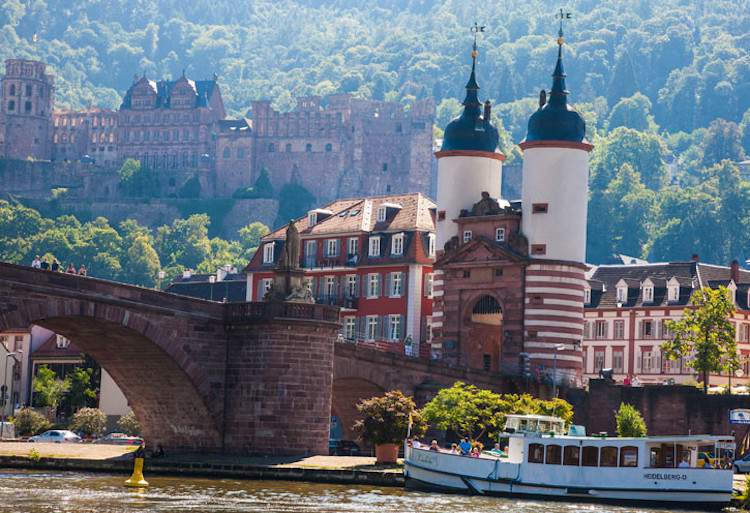 The impressive bridge across the Neckar River – dating back to the 13th century – connects to the more recent expansion of Heidelberg, with its stately 19th century mansions, wide avenues, and thriving commercial center. This is a prosperous town, packed with businesses and research institutions, and it shows. From the Left Bank you can also venture up famous Philosopher’s Walk, which takes you to several platforms, all offering spectacular panoramic views over old Heidelberg and its hilly surroundings. And it is perhaps from up there that you have the best view of the gorgeous castle, built over time between the 14th and 17th centuries in an assortment of architectural styles from Gothic to Renaissance, all using prevalent red sandstone. It was destroyed over time but the city fathers decided a long time ago to preserve its ruins.

Today, the castle, its grounds, and its remaining halls are used for festivities like dinner banquets, balls and theatre performances. In summer, the courtyard is the site of the Heidelberg Castle Festival, the Heidelberger Schlossfestspiele, where open air musicals, operas, theatre performances, and classical concerts are performed. The next festival, incidentally, is taking place from June 21 over the course of a month, and in a nod to the German-American friendship which is culturally anchored in this region, features a humorous adaptation of Cole Porter’s musical Kiss Me Kate. 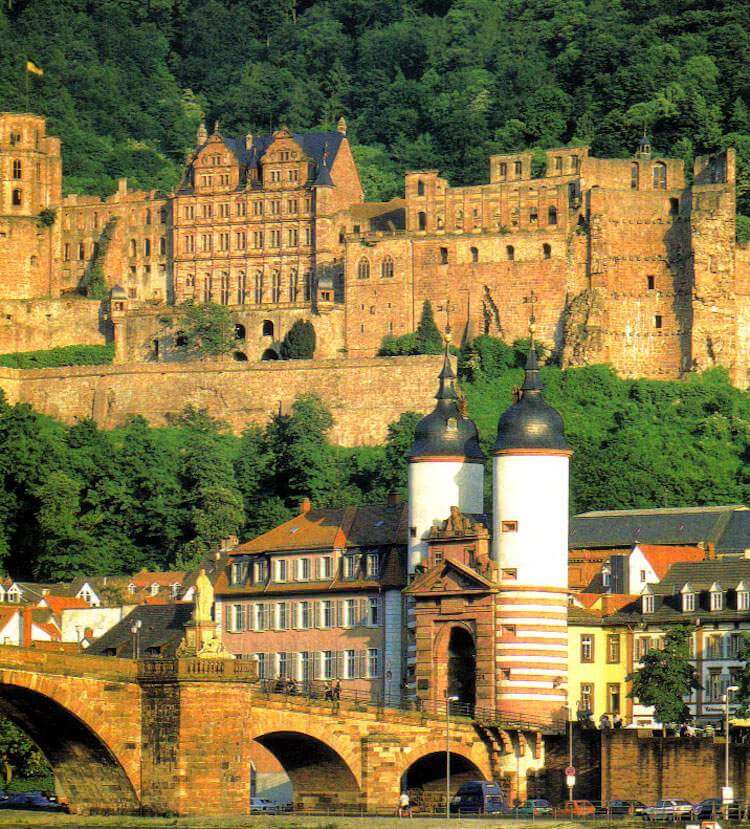 Beyond Frommer’s – A Few Insider Tips

Once you settle into your hotel – and the town is chockablock with accommodation for every budget – make sure you take time out to spoil yourself. You might want to start with a great lunch at the Goldener Hecht restaurant, right by the entrance to Old Town, and if you do, pause a moment to appreciate that before you, the entire circle of German romantic poets were patrons of this restaurant which dates back to 1717. Only one illustrious personality never made it – Johann Wolfgang von Goethe. Not for personal want… his diary indicates that he was much looking forward to sojourning here…but he was turned away as the inn was full the night of his arrival. The cuisine offers excellent German and Austrian food which you can enjoy in the historic dining room or the beergarden. Be sure to bring a healthy appetite and a companion – local sources tell us that you will find a divine Kaiserschmarrn here, the ultimate Austrian dessert, but that there is no way to finish it all by yourself. 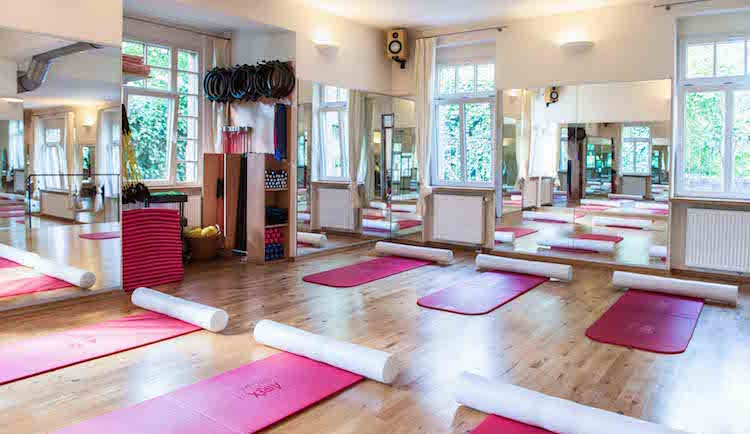 To work off your calories, you can either wander up to the castle garden along with hundreds of tourists, or… much smarter choice! – book an individual session at Villa Sportiva, a boutique fitness studio in Neuenheim (pictured above), the new part of town, which is open seven days a week. Isabelle and Estelle Baumann who jointly converted an old granary into this delightful, squeaky clean gym with an individual note, are fantastic personal trainers who ensure that you will be perfectly taken care of. If you call ahead, you may also schedule a massage therapist. And a bit of friendly gossip: Owner Isabelle Baumann is also heavily involved in humanitarian activities, doing clothes runs to underprivileged regions of the world in dire need of help several times a year. Any in-kind donations welcome!

Need a treat for working out so diligently? A little retail therapy maybe? Here is one of Heidelberg’s best kept secrets but shhhht, don’t tell anyone: Not far from Villa Sportiva is GabiGabi, a charming boutique specialized in gorgeous accessories made from natural, sustainable materials which are perfect proof that recycled can be every bit as aesthetic and chic as mass produced items. When owner Gabi Gattaz isn’t busy making them herself, she sources them from around the world, most typically from Latin America…. an affiliation which goes back to the time she lived in Brazil for 25 years. And if asked, this former fashion model will also throw in some styling advice for free

Now it’s time for some action, and there is always some festival or attraction going on that strengthens the bond between Germans and Americans. The latter historically have had a strong presence in the area – with the Kaiserslautern and Mannheim U.S. Army bases in spitting distance – and fraternization is the motto as confirmed by these two handsome and friendly peacekeepers from either country. 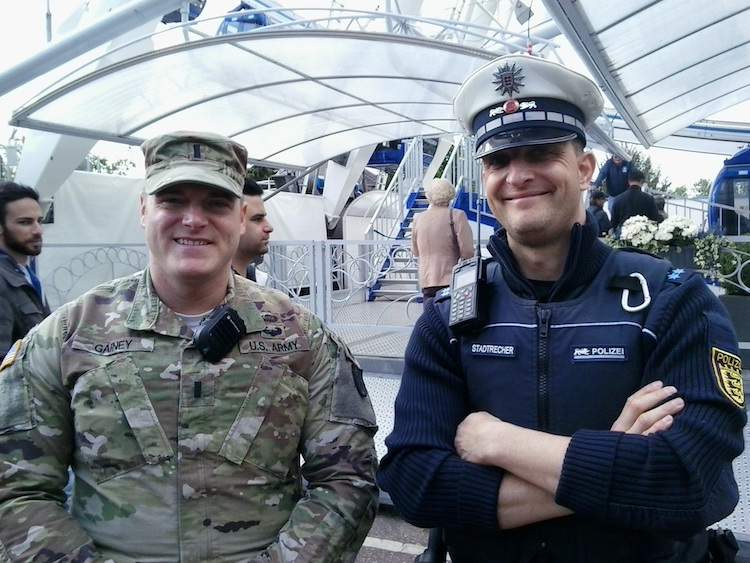 If you think the moment has come for some spiritual recreation…. yes indeed. And what better plan than to trek up to the Stift Neuburg monastery, which not only gives you a break from the hustle and bustle of everyday life but as its own self-sufficient entity also produces its own beer, liquor, and other victuals to restore the weary spirit.

And no visit to Heidelberg would be complete without a trip to Altes Hallenbad. This was indeed a municipal indoor pool once upon a time, and while the precious Art Nouveau mural tiles have been preserved, the space which formerly housed the Men’s Bath, has been converted to a markethall-style shopping and dining venue with a theme around living, design, and cooking. On the other side, the erstwhile Women’s Bath has been transformed into a space entirely dedicated to well-being ranging from concerts to a breathtakingly beautiful Irish-Roman salt bath, Casa Salis … salt therapy so soothing and healing, you will not want to ever leave again.

But leave you must, as your busy and yet ever so relaxing weekend is coming to an end. Double-check as you leave town because more than one person before you has lost their heart in Heidelberg. And it’s okay … you’ll be back, that’s for sure.