After talking about Manchester’s fascinating history and rebel spirit in the first part of our double feature, the second instalment tells you all about the must-see places, venues, and businesses across town

In July 2017, several weeks after the atrocious terrorist attack at Manchester Arena that cost 22 innocent lives, the city’s tourism board MARKETING MANCHESTER and countless local businesses invited 70 international media influencers, among them RIVIERA BUZZ, to (re)discover the city. What we saw surpassed our expectations in every way…

In our first instalment of our Manchester feature, we looked into the city’s history and what makes it so unique and special. If the city needed one more loving nickname, we would dub it The Rough Diamond in England’s Treasure Chest. Today we explore some of our favourite sights, events, and businesses we have come across that we think you cannot miss on your visit. All are great, without exception, but more importantly, what makes them even more unforgettable are the people associated with these places, who bear equal testimony to their love for their fellow humans and for their city. So along with the sights, we’ll also tell you about some of personalities we met en route. You will soon understand why writer and musician Mark Radcliffe said about Manchester that it is “a city that thinks that a table is for dancing on.” 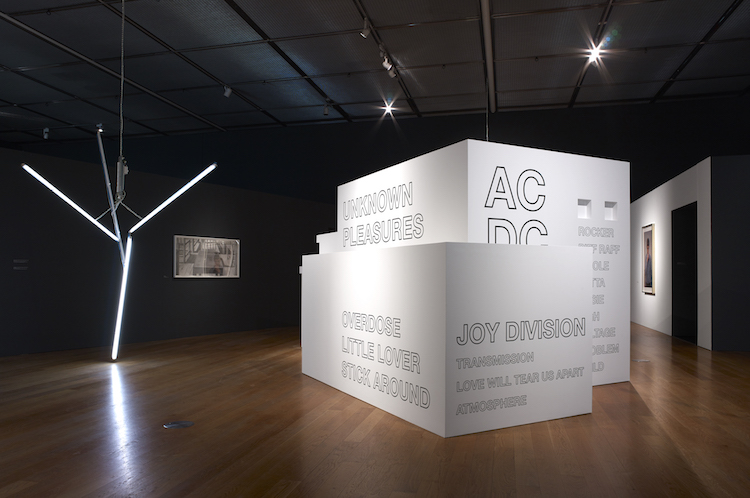 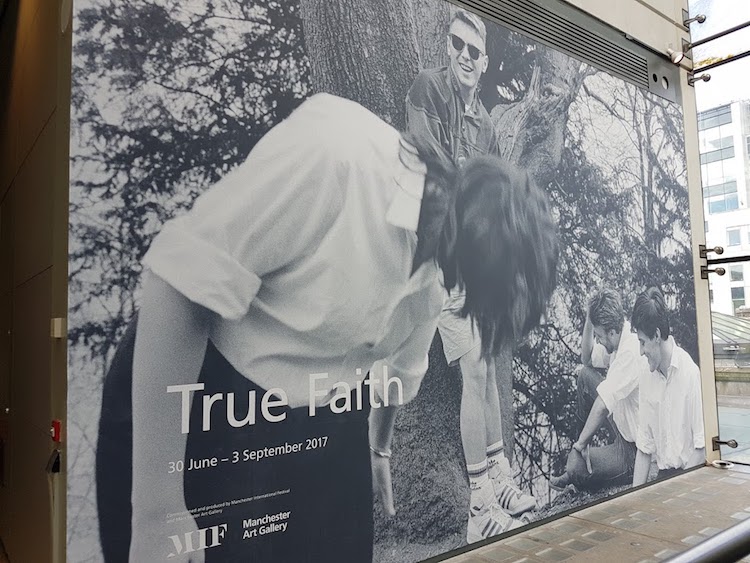 Fancy classic master pieces? Welcome to Manchester Art Gallery. More into contemporary art? Ditto. Asian design your thing? See above. This place offers something for everyone under one roof, and despite the seeming discrepancies in style, it is so well-laid out and organized that never the three or four or five different themes shall mingle. Highly recommended right now, the True Faith exhibition (through September 3), which explores the ongoing significance and legacy of New Order and Joy Division through the wealth of visual art their music has inspired. And if you are lucky enough to bump into curator Fiona Corridan, do not hesitate to pick her brain, she is a walking, talking encyclopedia of all things Modern Art.

There is something quite worship-worthy about this theatre and gallery complex situated in Salford, Manchester’s twin town across the river. Located right in the heart of Media City, its size is already rather awe-inspiring, offering seating for over 2,300 spectators in three theatres (not even counting the gallery), but the programme is not short on inspiration and aspiration either. We were lucky enough to catch The Mikado, an absolutely hilarious, all male-adaptation of Gilbert and Sullivan’s popular opera. And once again, as a testimony to Manchester’s spirit of inclusion, there is also a dementia-friendly version.

If it were for us, we’d rename the city “Manjazzter”. The annual jazz festival – at 22 years, it is Manchester’s longest-running music festival – is a cornucopia of concerts where masters and newcomers intermingle. Set in a welcoming and relaxed atmosphere, half indoor, half outdoor, the festival has nothing high-brow about it. Its main venue, the magical 1920s Salon Perdu Spiegeltent in Albert Square is quaint, cozy, and mysterious all at the same time. Here, jazz is egalitarian and not elitist, a casual music event for all to enjoy – but that does not mean the acts are not top notch. One of the ones we caught was Nérija, and boy, were we ever glad we did – this is where traditional Miles Davis jazz meets Jo’burg township tunes! And coming back to the people of Manchester….. we happened to be sitting next to a friendly fellow by the name of Chris Waites, a non-artist (as he insists), peeking over his shoulder as he ink-sketched the performers on stage, and if ever he considered a creative career, he’d certainly strike it big… 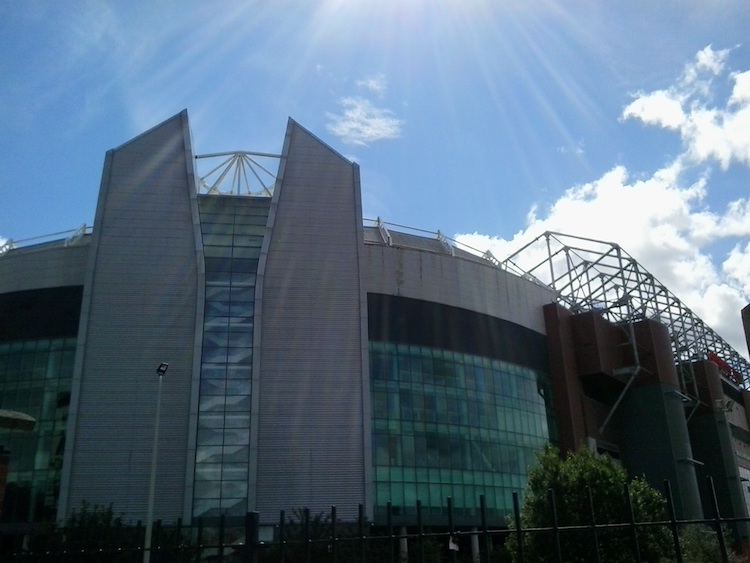 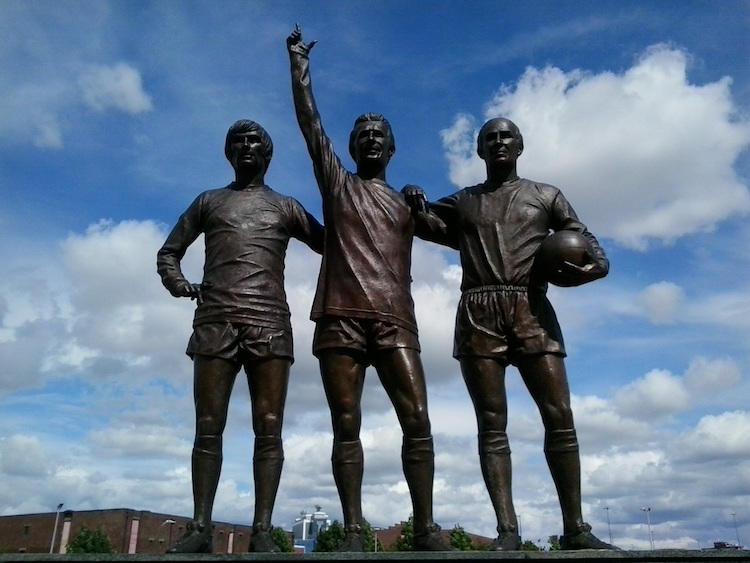 Less artistically, more athletically inclined? Manchester United’s home turf is your go-to venue. A museum-cum-guided stadium tour enlightens visitors about the legendary English football club’s distinguished history, from its humble beginnings to the 1958 Munich airplane disaster and all the way to its most glorious triumphs. It’s the next best thing to meeting Wayne Rooney, David Beckham, Cristiano Ronaldo, Fabien Barthez, or Paul Pogba in person.

Alright alright, we’re biased here because we were spoiled rotten during our stay at the four-star Innside by Meliã hotel but this is truly the place in Manchester to rest your weary traveler’s head. Starting with the hand-written welcome note by guest experience manager Kris Doyle accompanied by a scrumptious cookie platter, and on to the well-appointed and spacious (no – make that humungous!) guest room, copious breakfast buffet, free minibar, staff that bends over backwards to assist you, the outdoor Ginnside terrace, and of course the central Castlefield location in walking distance to just about anything (with Metrolink public transportation across the street) – unbeatable, and this will be our go-to hotel for every future stay in Manchester.

This is a difficult one. There are soooo many great options. You can for instance grab some of the funkiest pizza creations known to man at aptly named Crazy Pedro’s Part Time Pizza Parlour or a wide variety of whatever-vegan-food you-fancy at the Grub streetfood fair. Here, we had to settle for two, a snack place and the full-on dining experience, and once again they stand out not just for their excellent food but also the personalities associated with them, and we will hasten to run back to either one.

As the name in reverence of Queen Victoria’s husband indicates, there is more than just a fleeting hint of Germanness to this wonderfully quirky place. It is indeed reminiscent of the good old beer halls over in Krautland, with the added advantage of a Bavarian bakery, but look closer and you’ll discover a whole universe just beneath the surface. This place is huge and cozy at the same time – try snatching a place around the central fireplace, especially on those rainy days. But for all of Albert’s Schloss impressive international beer menu and the yummy Bavarian cakes, patisseries, and bread, and fun atmosphere, its greatest asset is Salvatore. He is the restaurant manager and he runs the front of the house with its hundreds of seats with the efficiency of a four star general, the elegance of an orchestra conductor, and the charm of a Latin lover. 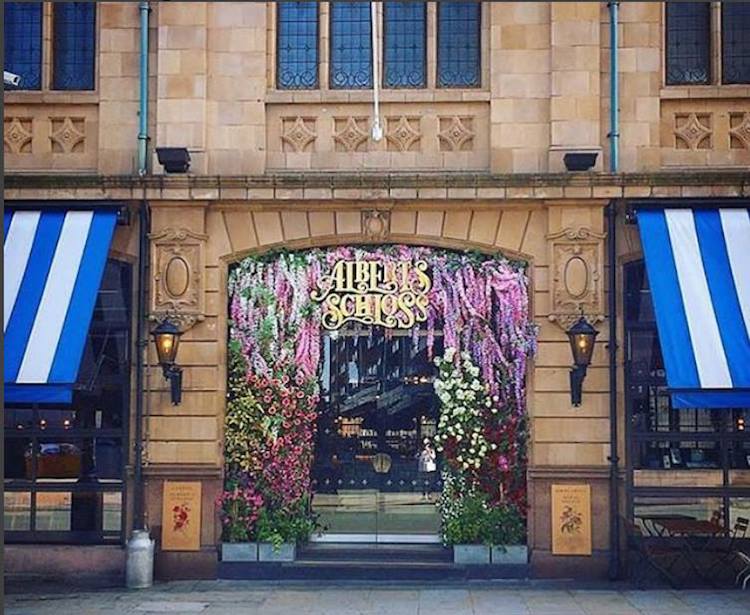 We happened to show up at the peak of lunch hour, and on a weekend where graduation, weddings and birthdays all coincided to be celebrated here – you are safe in assuming this is one of Manchester’s top spots to celebrate such milestone events. Hardly anything left to munch on for us but not a problem for Salvatore. He scoured his kitchen for something edible and came up with delicious, gooey cinnamon rolls, which he served to us with a smile, a kiss, and a “making-up-for-it” gift bag of the tastiest loaf of bread we’ve ever sunk our teeth in… if you can imagine bread made from pilsner beer, bacon, and cheese, then you’ll know. Now that is service fit for a royal like Albert, and even for us.

Oh, and here is an insider tip, just for you: if you say “guten Morgen” upon arrival, you’ll get half off of your bill. But shhhh, don’t tell them we told you… 😉 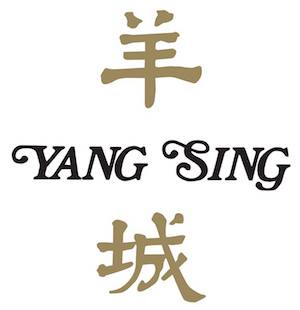 A word of warning to begin with. Do not, under any circumstances, eat breakfast before you go to the best dim sum restaurant west of the Great Wall! Yang Sing is a third generation family affair, and that is exactly how you are welcomed there – a long lost family member. We got an extra-special treatment by Bonnie, the owner’s lovely daughter, starting out with a tour around Chinatown, the second largest in the UK after London. Its impressive arch gates an ethnic enclave consisting of a maze of little alleys where the resident Chinese families and traders have known each other for generations. But back to the Yang Sing restaurant… their dim sum is out of this world good (apart from dozens of awards, it has also earned a Michelin guide listing!), feeds an army, and is served with enthusiasm and pride. On request the family will also allow you to tour the kitchen, or even climb up to the roof terrace with its spectacular 360° view of Manchester, which they hope to eventually convert to another dining space.

And yet another word of wisdom, based on newly acquired experience: the only thing you need to bring to Manchester is a toothbrush and a huge empty travel bag, which we can guarantee you will fill up faster than you can say “Shopping”. Retail therapy is a mass sport here, and the quality of the shops is well worth writing home about (even for Americans….) The Manchester Arndale, intu Trafford Centre, Exchange Square and Market Street shopping centres are packed with all the High Street brands, the Lowry outlet mall is label lovers’ idea of paradise on Earth, and the Northern Quarter is vintage store central. Add to that hundreds of quirky, funky, interesting and creative independent retailers, and you know what we mean…

So, so, so Much More

What we have talked about here, is barely scratching the surface of the oyster that is Manchester. So many more places to explore…. The Cathedral whose earliest origins date back to 700 AD, the neo-gothic John Rylands Library which is a sanctuary for lovers of books and architecture alike, or the Imperial War Museum, to name but a couple of a tremendously broad selection. Or take one of the specialty walking tours like the one around the Roman fort in Castlefield, or tread in the footsteps of the musical legends that have left their imprint on Manchester’s history. Year round, hundreds of clubs, events and festivals for every taste and budget are waiting to be explored. If you’re lucky, you’ll even catch the Comic Con festival (we were, and it was a sight to behold…) 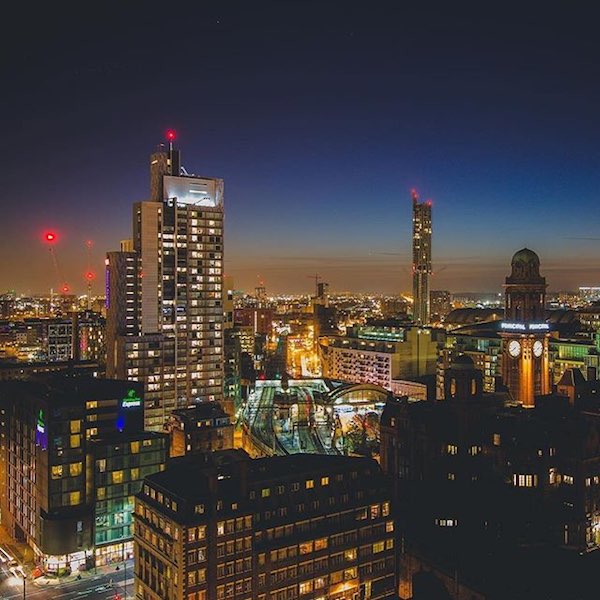 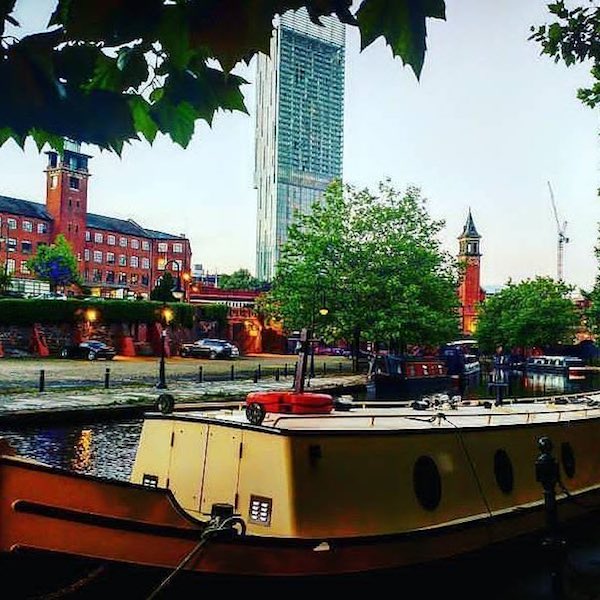 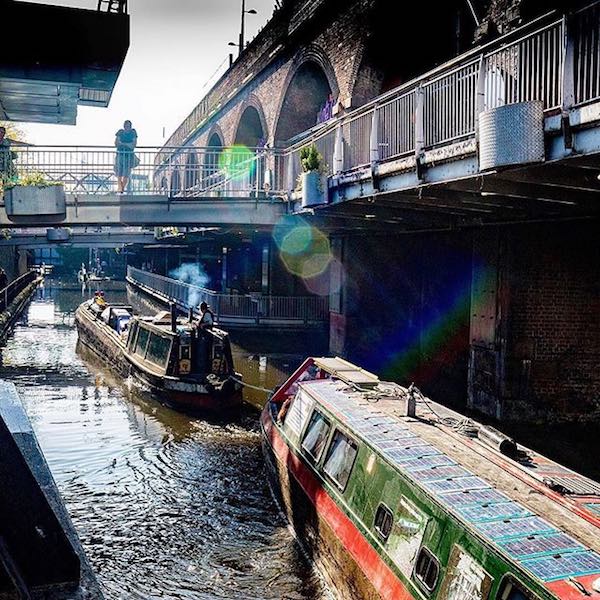 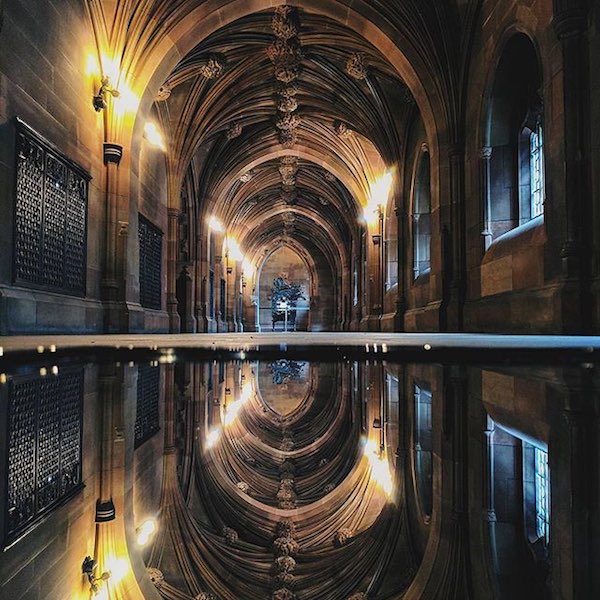 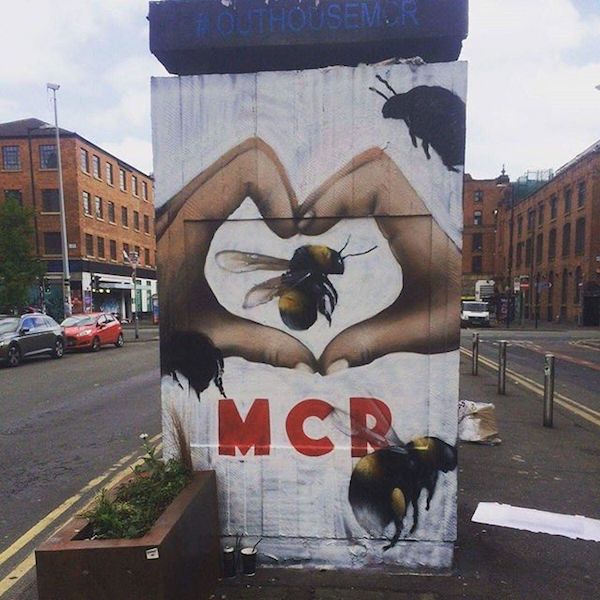 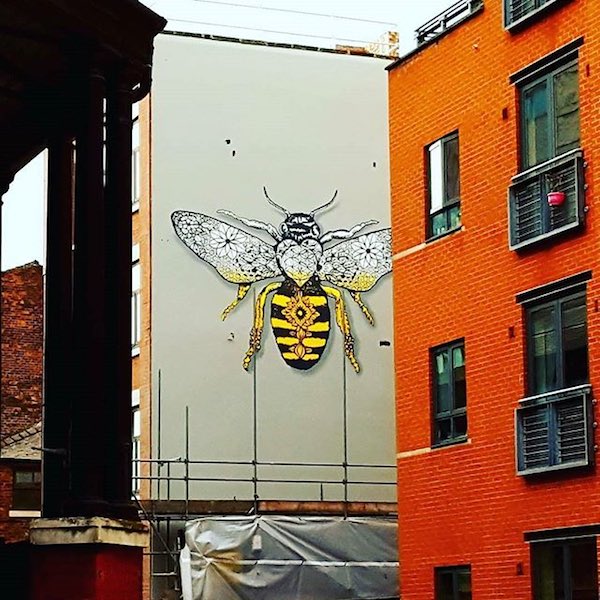 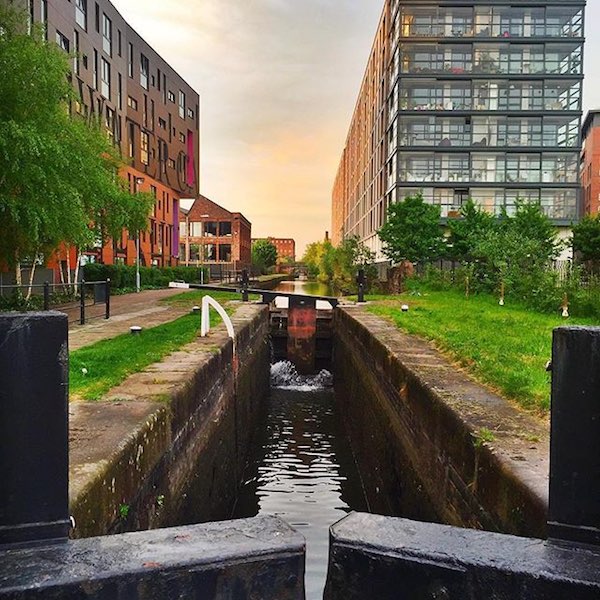 Whatever you do, plan much more time than you originally thought you would need, because as you already know from our first installment, this city is more than worth it. And while with its rustic industrial charm Manchester is not a conventionally “pretty city” in the sense of Paris or Florence, it is immensely likeable, absolutely hip, and decidedly instagrammable. The rough diamond in England’s treasure chest does not need polishing, it is perfect as it is. We said it before and we’ll say it again, if Manchester is already magical, what makes it truly special are its people. And we’ll be back before you know it, Manc!

RIVIERA BUZZ would like to thank the team of Marketing Manchester around Sheona Southern, and especially Andy Parkinson and Jonathan Gough (pictured below), for all their hard work in putting together the impeccably organized Worker Bee Weekender event.  You are true ambassadors for your city, and Manchester can rightfully be proud of you. 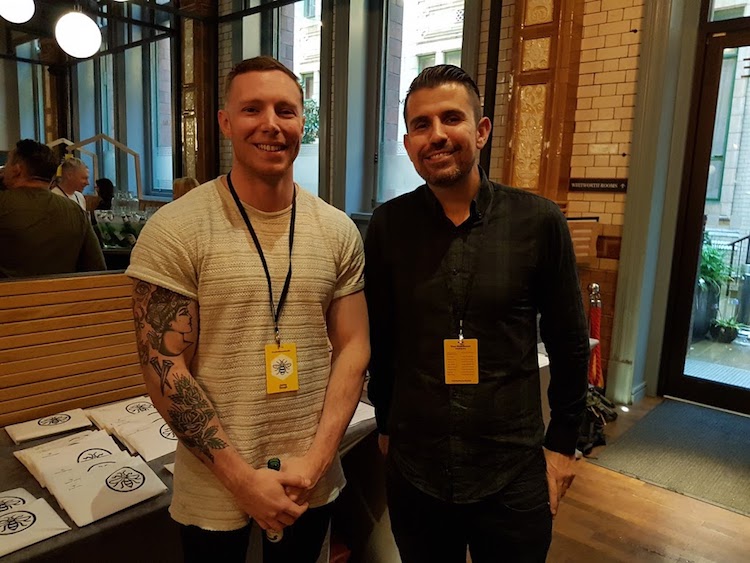 We also wish to thank the Mancunian businesses and individuals that helped make our stay an unforgettable one: