Sandwiched between Budapest and Vienna, and just a stone’s throw from Prague, it is very easy to overlook Bratislava, capital of Slovakia.

Since the dissolution of Czechoslovakia in 1993 which saw the country split into the Czech Republic and Slovakia, it seems like the former has received the lion’s share of world attention and tourism. But the Slovakian capital of Bratislava definitely possesses both an old-fashioned charm and an interesting history that makes it the perfect destination for a weekend getaway.

Spanning both banks of the Danube, the city which was once known as Pressburg, boasts a long and complex past, marked by the likes of the Hapsburgs, Napoléon, the Nazis, and the Communists.

One of the best examples of this is probably Bratislava Castle, a massive monument sitting atop a hill, overlooking the entire city (see lead image). Built in the 9th century, it became the formal seat of the kings of Royal Hungary in the mid 16th century. Restored many times over its 1,000+ years of existence, it has four corner towers that make it look like an upturned table. And according to legend, the internal stairs are very wide and shallow as Hapsburg Empress Maria Theresa was too heavy to climb them herself, and insisted instead on riding her horse up and down. The castle is now home to the Slovak National museum and its beautiful grounds provide for some great photo opportunities. 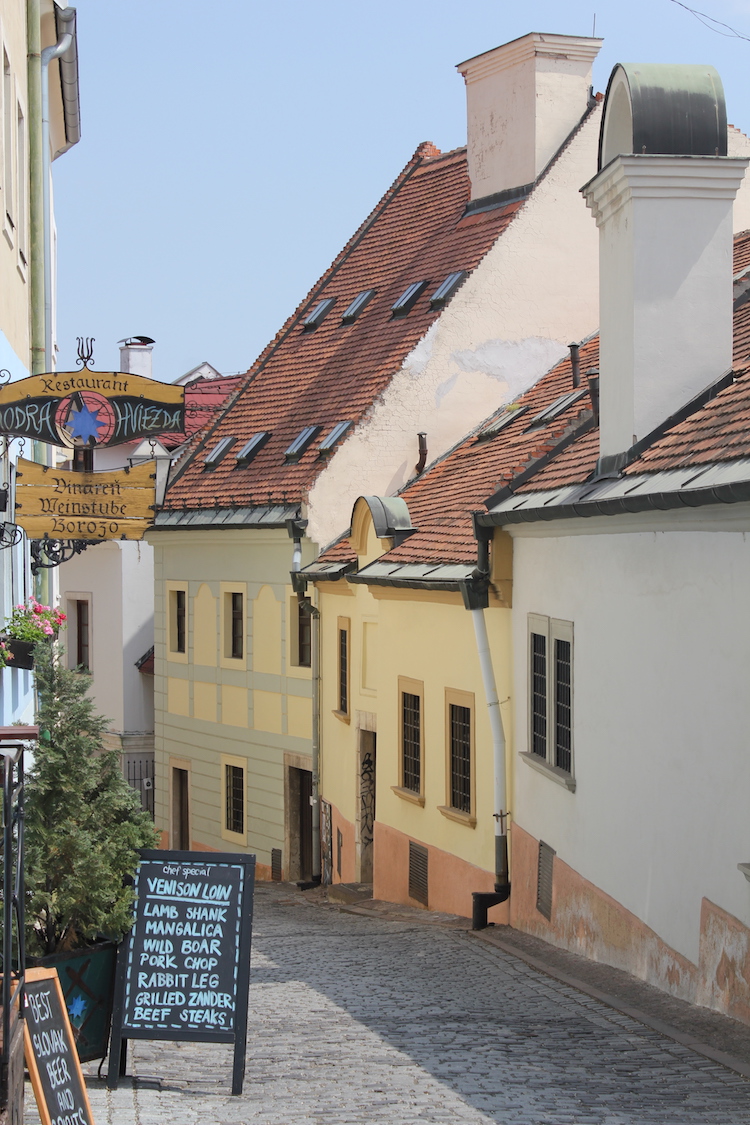 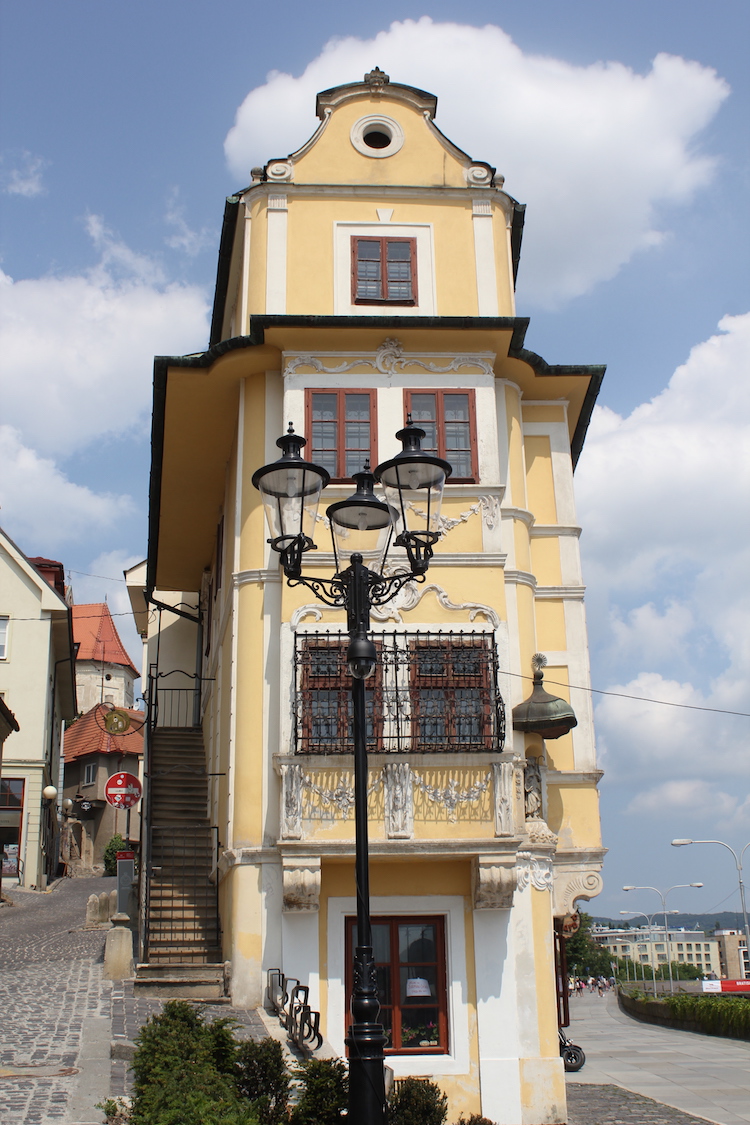 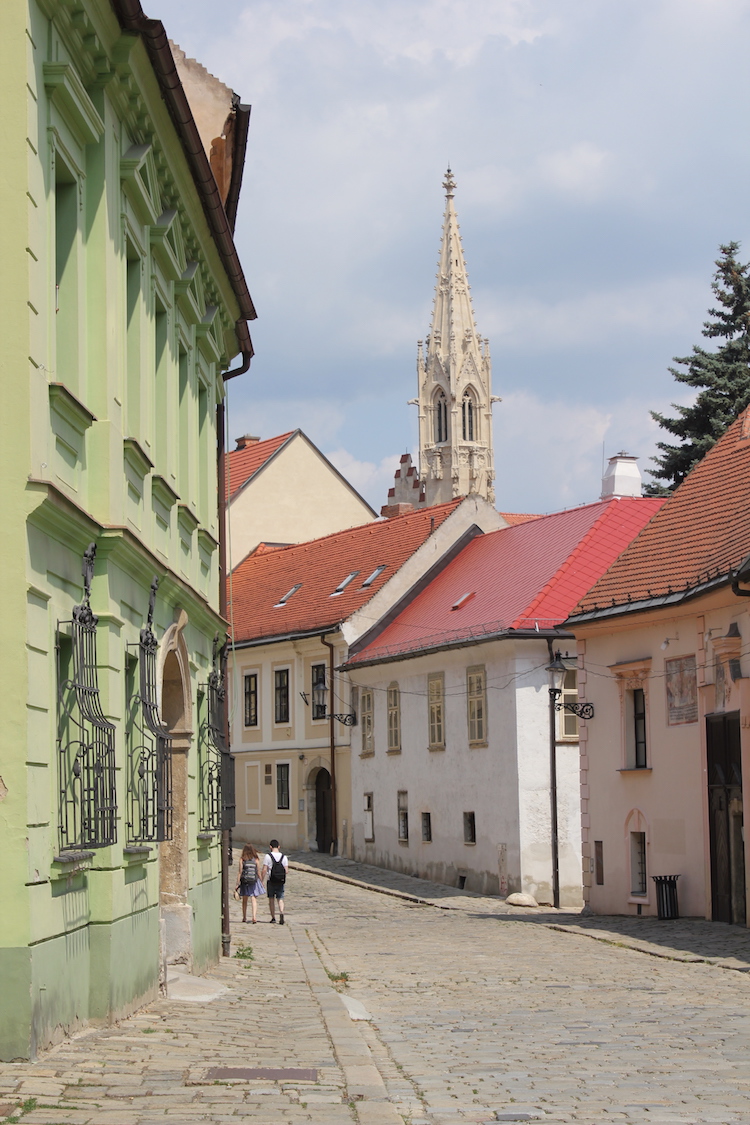 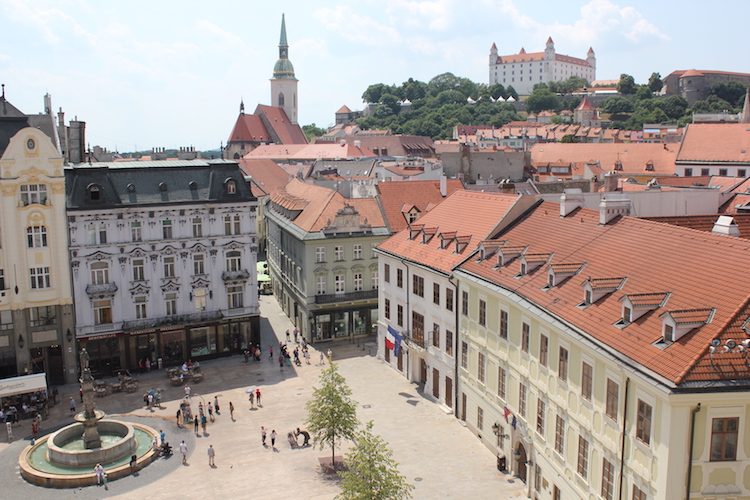 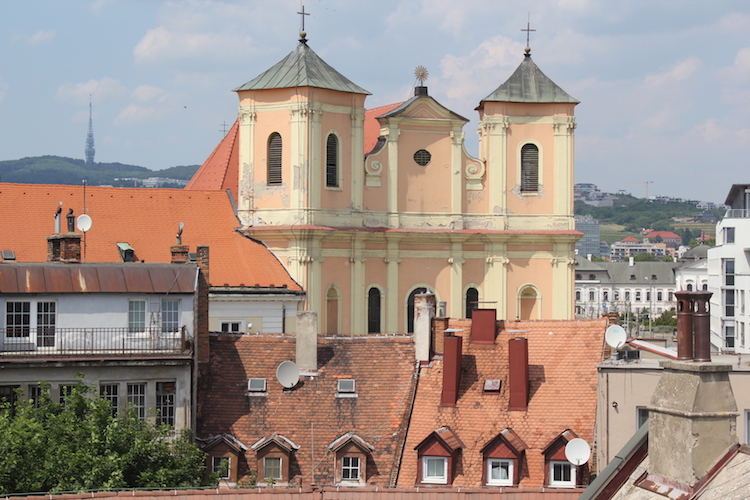 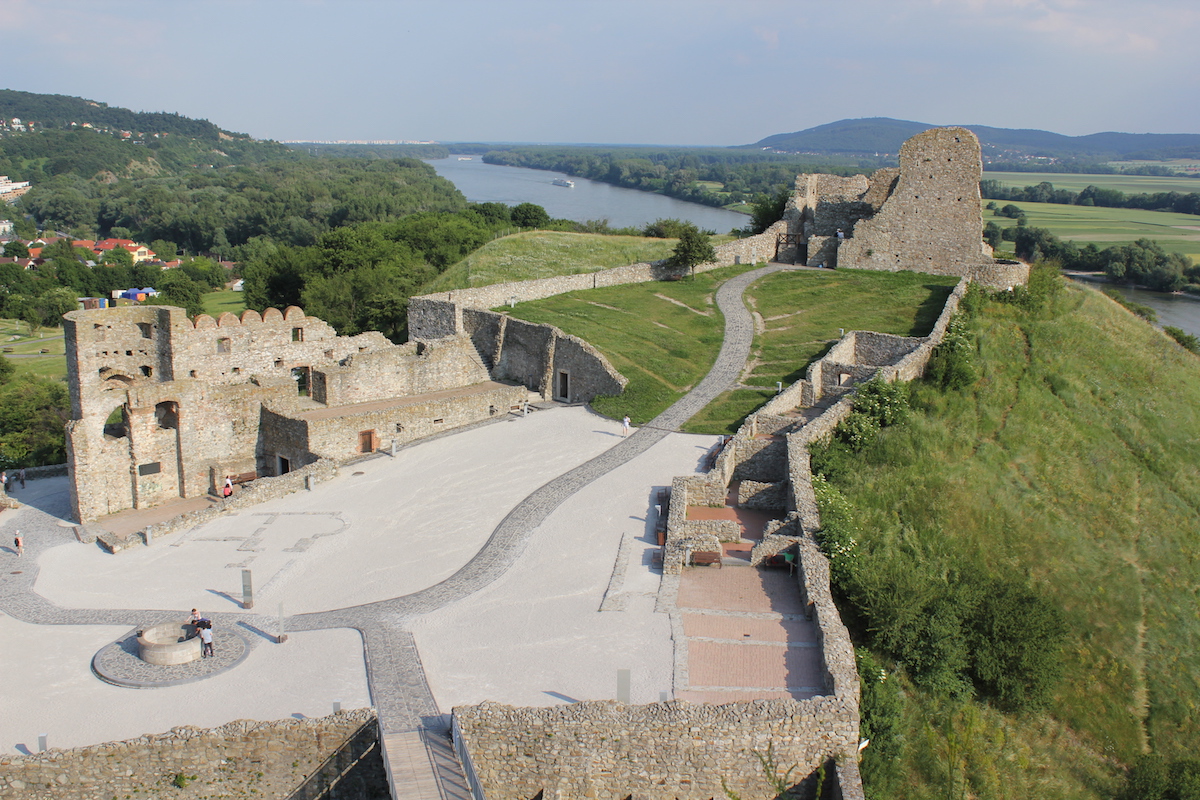 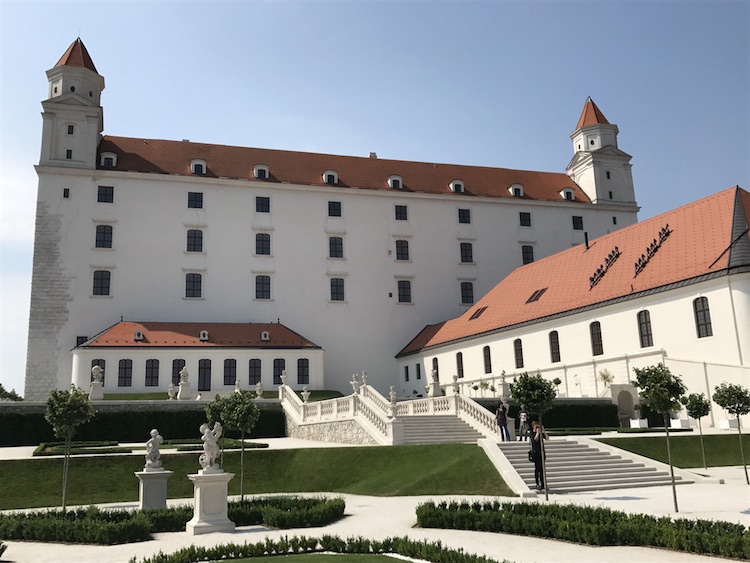 A walk through the narrow cobbled streets of the Old Town is like stepping back in time. The buildings date from various architectural periods, and the main square, Hlavné Námestie, full of cafés and kiosks selling handcrafts, bustles with life.

From the terraces of both Michael’s Gate, the only preserved gate of Bratislava’s fortifications, and the Old Town Hall’s Yellow Tower, one can enjoy a fantastic panoramic view of the surroundings. The three-nave Gothic St. Martin’s Cathedral with its gilded replica of the coronation crown atop is a reminder of the city’s glorious past, while the many whimsical statutes that are dotted around the Old Town are a nod to a quirkier side, like Schöne Náci, the jovial chap in tails with cane, who doffs his top hat to the curious Čumil popping out of a manhole (pictured below). 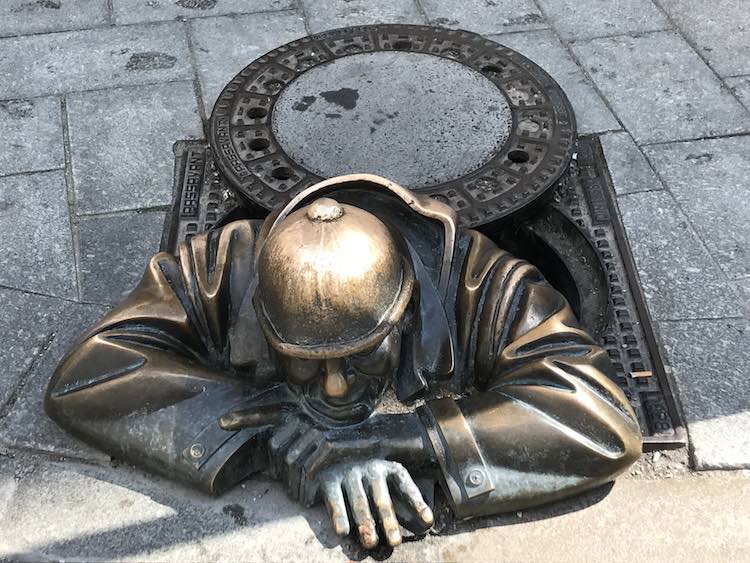 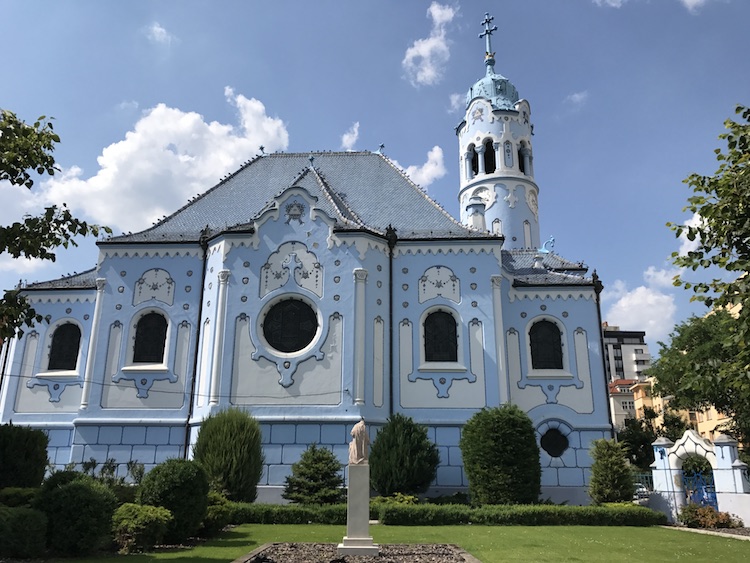 Just outside the walls of the Old Town, St. Elizabeth’s church, built in the Art Nouveau style at the beginning of the 20th century, is a not-to-be-missed attraction with it blue-coloured façade and dome. A little further outside the city, the ruins of Devin Castle, a fortress built on a high rock towering above the confluence of the Danube and Morava Rivers, offer enchanting natural scenery.

There is no direct flight from Nice to Bratislava, but the city is easily accessible by train or bus from both Vienna and Budapest.