Culture and politics are often at odds but every once in a while they team up for a higher cause.

Making good on a promise to unite across party lines to fight the right extremist Front National through arts, culture and creativity, Regional President Christian Estrosi inaugurated the “Conférence Régionale Permanente des Arts et de la Culture”, a nonpartisan counsel of personalities in the creative field in Marseille on June 30. Twenty personalities representing various artistic disciplines and viewpoints within PACA have been tasked with developing suggestions for a cohesive regional cultural policy reflective of the region’s diversity and social fabric.

Referring to FN figurehead Marion Maréchal Le Pen’s recent criticism of modern art as snobbish pretension, PACA President and Niçois Mayor Christian Estrosi declared that “it is not the role of politics to play favorites among different ways of expression, artists, or their works. Like all of you, I have my taste, my preferences, my dislikes. And I am free to practice them as I see fit, like all of you, because I am a free citizen. But in my office, I have one principle only, and that is the freedom of the creative.”

Defending this freedom is the role of the Permanent Regional Arts and Culture Conference. Strictly advisory, it serves as a place of exchange between artists and cultural influencers. Among the latter are illustrious personalities like Olivier Py, the director of the Avignon Theatre Festival, Bernard Foccroulle, in charge of the Aix-en-Provence Festival of Lyrical Arts, and Charles Berling, one of the leading French actors and co-director of the Théâtre Liberté in Toulon. 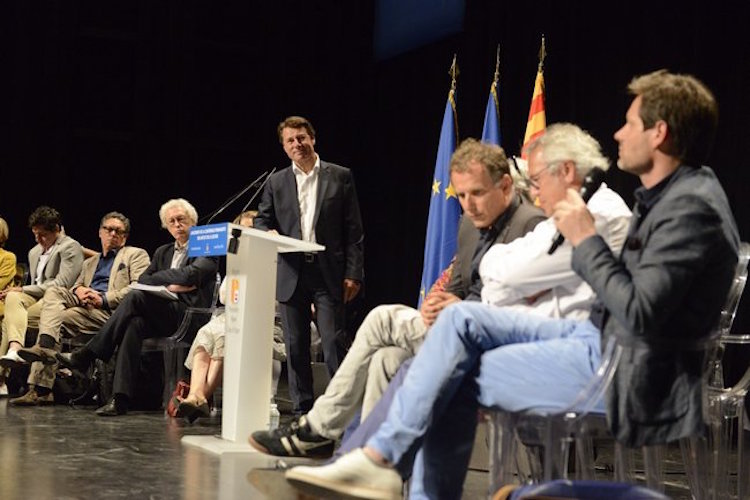 Mr. Estrosi’s initial agenda for the counsel focuses on the development of digital creation, sponsorships, crowdfunding, the region’s heritage and identity, and employment. Another important issue is to go away from the feverish seasonality of events, like the abundance of summer festivals and to spread them out more evenly over the year. “It is high time to realize that your creativity is not dependent on rising temperatures,” he stated. Keeping an eye on equality within PACA’s regions given the limited resources available, and to develop a mechanism to support distribution are further topics on the president’s task list for the Conference. “Your experience, your enthusiasm, your thoughts are the best arms we have. You are an element of cohesion and reconciliation. You represent the best and most creative that exists,” he said in his closing remarks, pledging also not to interfere in any way with the principle of freedom of creation.

The initiative is welcome and applauded by artists and administrators alike. “You can feel a very different dynamic kicking off. I have always been a man of the left but I am really happy that something is finally happening,” Charles Berling commented.

The Friche de la Belle de Mai – a 19th century Marseille tobacco manufacturing plant turned multidisciplinary meeting place for artists and creatives – as choice of venue for the inauguration of the Conference was no coincidence: it was at this very spot where FN launched its attacks on freedom of artistic expression during the 2015 regional elections. A hotbed of immigration with all its problems but also its unique brand of multicultural coexistence, PACA’s capital Marseille has a 3,000 year history at the crossroads of Mediterranean cultures. To launch the Conference here sends a clear signal that culture and politics will cooperate for this precious heritage not to be destroyed by extreme nationalists.

Christian Estrosi,
President of the PACA Region and Mayor of Nice
30th June, 2016