An encounter with the guy who makes science, technology, and environment issues positively sexy

He is neither a musician in a band nor a medal-winning athlete (although he has a talent for both), he is a scientist – but he is celebrated like a superstar wherever he goes. And not just teenage girls are star-struck…. no, even grown men beg for his autograph, a handshake, or a photo with him: Thomas Pesquet, way more hunk than geek, puts “cool” into science like no other. And although the high-flyer has just spent six months on board the International Space Station (ISS), an experience very few of us will ever be able to relate to first-hand, he has not taken off into a higher stratosphere of superiority but has remained the nice guy next door with a great sense of humour with whom you want to have a cold one at the local pub. 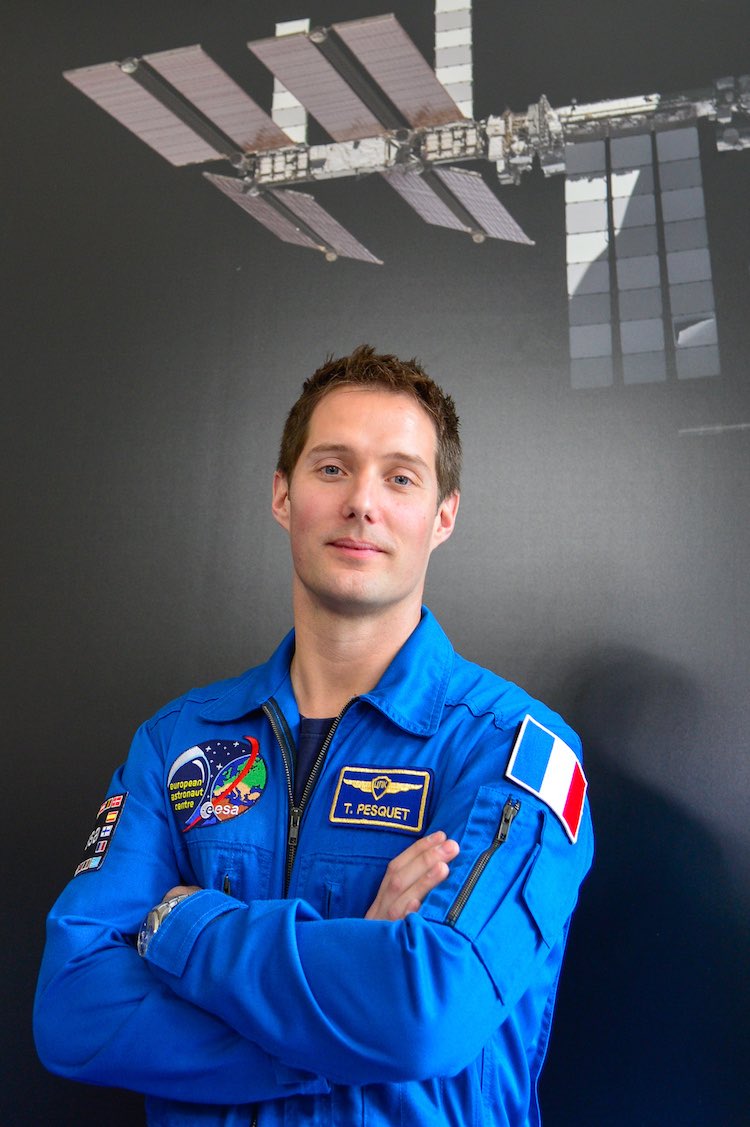 But sadly he won’t have any time for that. Now that he is back on Planet Earth, he has other important tasks to fulfil: he criss-crosses the world in a quest to spread the word about science and technology as a vocation, and above all to raise awareness for a cause that matters greatly to him: #FaimZéro (in English, #ZeroHunger), the UN’s the global fight against food shortage and waste. On his stopover in Cannes on November 23, the spatial envoy was invited to talk in front of 900 employees of Thales Alenia, the Cannes la Bocca based space technology company where Thomas did an internship in 2001. Staff, along with students from several local schools hung on to the space traveller’s every word on the topic of Space In The Service Of Life and his personal quest to take positive climate action and eradicate hunger. 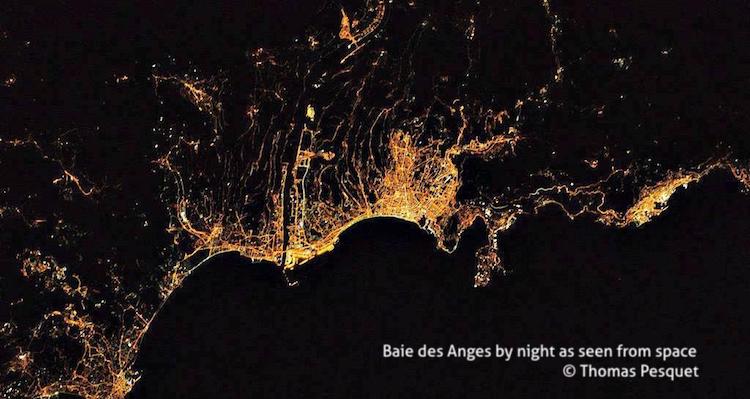 Of course, everyone’s first question always seems to be, “What does it take to become an astronaut?” After all, what young boy (or girl for that matter) never wanted to be one? Thomas Pesquet, the Rouen native, certainly did. His father supported this interest early on, building him a “space craft” from cardboard boxes and pillows, and Thomas did his part to achieve his goal. He knew it would take extremely hard work but he was willing to go the extra mile that would eventually put him into space. His baccalauréat in hand, he pursued satellite engineering studies and in 2001 got his master’s in space systems and space vehicle mechanics. And gradually he acquired all the competences that would serve him on his way to reaching for the stars. In 2006 he got an Air France commercial pilot’s licence, racking up 2,500 flight hours before becoming a flight instructor. Nice to think you may have flown on a plane commanded by Captain Pesquet…

But the sky-high demands for his ultimate career goal didn’t stop there. Along with scientific and technical aptitude, other skills required are the ability to communicate in several languages – along with his native tongue French, Thomas speaks English, Spanish, German and Russian, and is currently learning Mandarin. A high degree of physical fitness is just as important… he is a judo black belt, and engages in about ten other sporting activities… and personal qualities such as leadership skills, mental and psychological stability, and the ability to stay calm under extreme pressure and solve problems on the fly are also on the mile-long list of requirements for astronauts-to-be. If all of this sounds as if only Superman could reach for the stars, take heart. “Being a team player is way more important!”, Thomas says.

Three, Two, One… Lift Off

With all this to show for, our young hero was one of only seven candidates, out of 8,413 who had applied, to be accepted into the European Space Agency (ESA) astronaut training programme in 2009. It took seven long years of rigorous training until he got his marching orders for Expedition 50/51. When leaving on his six-month mission onboard Soyuz MS-03 on November 17, 2016 from the Baikonur Cosmodrome in Kazakhstan, Thomas was just 37 years old, making him the youngest ESA astronaut to date. His arrival at the ISS marked the beginning of the European Proxima mission, during which he would carry out 50 science experiments and a couple of space walks. Oftentimes he would serve as a human guinea pig, when medical trials were performed on him and his colleagues to study how the organism adapts to space. “You better not be afraid of needles and other gory things because that is part of the job,” he states drily.

His 12 hour work days kept him busy but he always found time to blog from up there. Millions of followers on social media became flies on the wall of the ISS, which is about the size of a Boeing 747 inside, watching the international team of astronauts under Peggy Whitson’s command at work and at play. And Thomas also sent thousands upon thousands of photos from 400 km altitude back home, showing the breathtaking beauty of our planet.

The tenth French astronaut in space returned to Mother Earth on June 2nd, 2017 after 196 days in space. And this is where classic question Number Two comes in, asking whether this experience changed his perspective in any way. “Of course it did. You really grasp just how fragile our world is. There is this small blue ball, and there is absolutely nothing around it to protect it.” He raves of the beauty of the Sahara desert where the sand dunes create magical designs of light and shadow, and the vivid colours of central Australia that look as if an artist had taken a giant brush to paint the landscape in bright red and blue. “It took me a while to find my bearings, looking down from up there. But once you get used to the view, and you look more closely, you really see the signs of environmental degradation and damage,” he explains.

This is why he has made it his next goal, back here on Earth, to become a vocal defender of environmental causes. This includes advocacy for COP21 and climate change, but also a campaign to raise awareness against food waste. To do so, he has teamed up with FAO, the Food and Agriculture Organization of the United Nations, and spreads the message wherever he goes: Everyone has to do their part to ensure not only our planet’s well-being but also that of its 7.5 billion inhabitants. It only takes small and common-sense steps but those are absolutely necessary if we want to leave a liveable planet for the generations after us: Don’t waste water or food, increase the amount of vegetables in your diet to reduce excessive farming, consume fish from sustainable sources, save energy, limit the use of plastic, recycle, and create greener urban environments. It is as simple – and as vital – as that.

One person was particularly sad not to be able to be in the audience on that day: Having to attend a meeting in Paris, mayor David Lisnard could only send the astronaut a video message that Cannes, City of the Stars, had just declared him an Honorary Citizen. Thomas Pesquet thanked him for the distinction with an entry in the Golden Book: 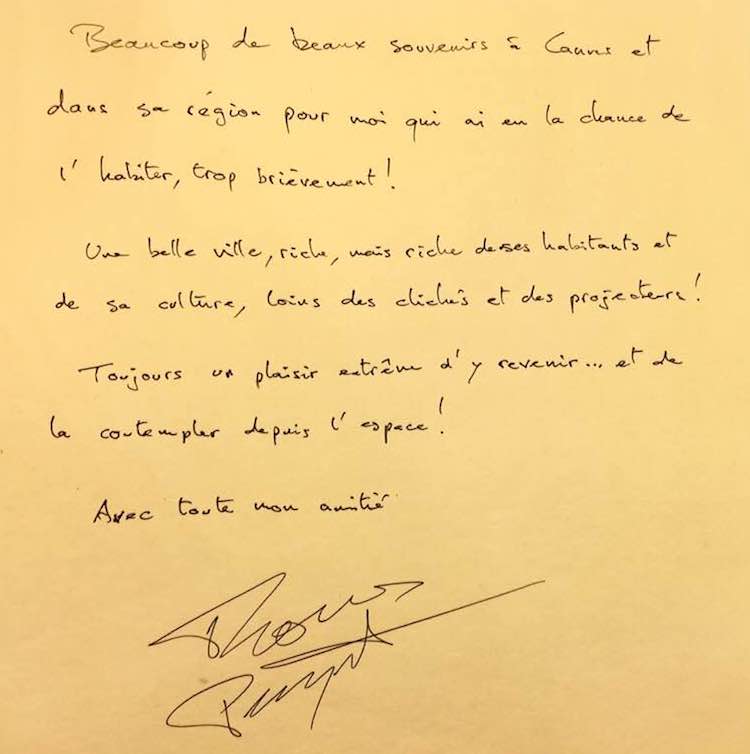 Of course space missions have a purpose far beyond philosophy… they serve first and foremost as exploratory journeys to find ways to inhabit other planets. Science and technology is therefore still the most critical aspect, and Thomas has another message: “We will do one mission every year, and I want to see more girls go in the field of space engineering. Hopefully, half of all future astronauts will be women.” And with such a rock star for an ambassador, the future of space science should be in good shape…

To get even the littlest ones already hooked on space technology, a newly released cartoon book, Dans la Combi de Thomas Pesquet, takes a humorous look at life on board a space station. 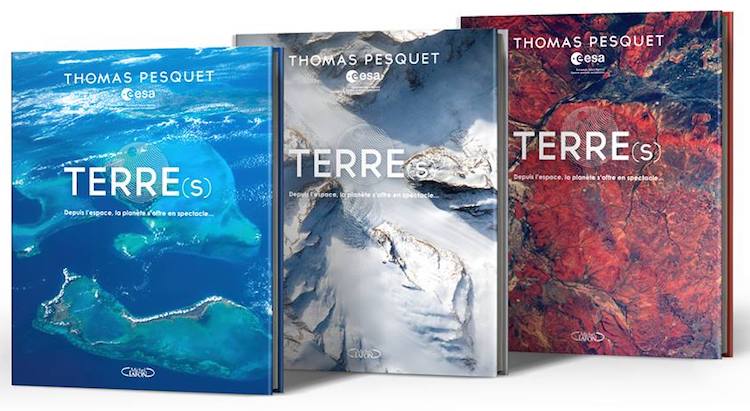 And if you cannot get enough of Thomas’ photography, he just published a coffee table book, Terre(s), containing a selection of his most stunning shots from space. With the holidays just around the corner, both books make terrific gifts, but in the case of Terre(s), Thomas literally put his money where the (hungry) mouth is, pledging the royalties from the book sale to Les Restos du Cœur, the French charity feeding the homeless and poor.