Blessed by astounding natural beauty, Cannes, the glamorous French capital of cinema, knows how to present its considerable assets to best advantage. But while its glamorous shopping mile La Croisette, rivaled only by Rodeo Drive in Beverly Hills or Bond Street in London, gets all the press, there is so much more to this ancient Ligurian-founded town, home to 73,000 souls. This winter, mayor David Lisnard seeks to shine the spotlight on Cannes’ historic architectural heritage by inviting world renowned luminographer Gaspare Di Caro to illuminate Le Suquet and La Malmaison, two of the most emblematic building ensembles of the Cannois cityscape. 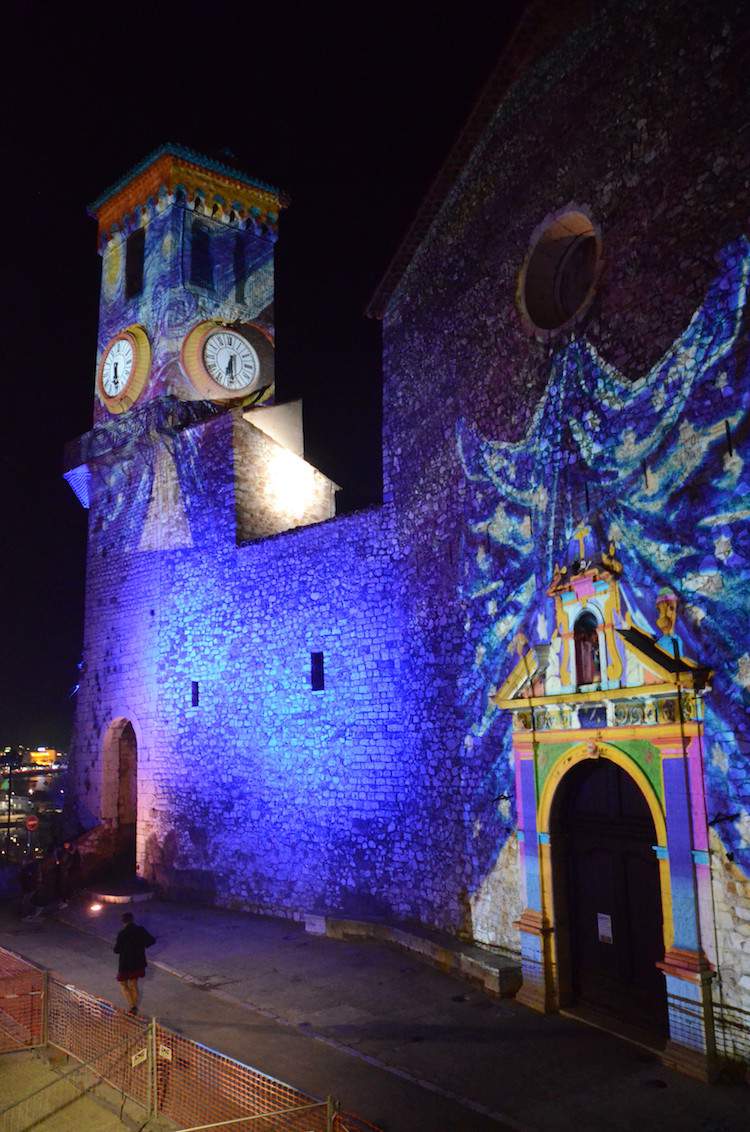 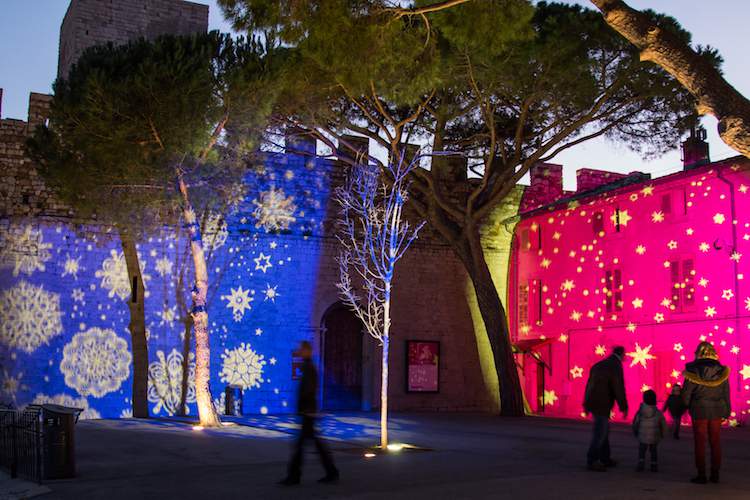 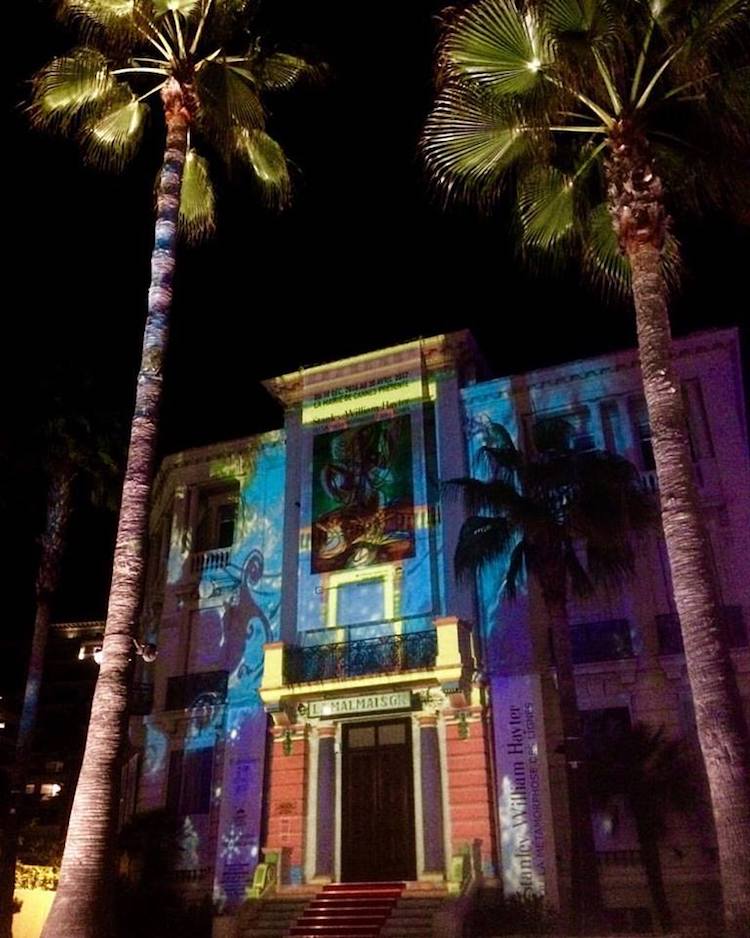 Situated on a hill with a vantage point of the Mediterranean Sea on one side and the Provençal hinterland on the other, Cannes’ oldest quarter features a medieval castle built by local monks.

Gaspare Di Caro’s seasonally themed projection shrouds the clock tower and the church in a blue cloak, as warm orange and yellow accents offset architectural features, and falling stars and snowflakes gently vanish into the night, reminiscent of van Gogh’s Starry Night. The tower of the building which today houses the exquisite Musée de la Castre is bathed in colours inspired by Renaissance painter Botticelli. (The eclectic world art museum in itself is well worth a visit, especially if you are fortunate enough to have Marcel Molines officiate as your tour guide.)

This art gallery, housed in a former hotel and transformed into a museum and cultural centre in 1983, was taken over by the City of Cannes in 2000 to showcase solo exhibitions of 20th and 21st century artists. To pay tribute to this home of contemporary arts, Gaspare Di Caro’s light show paints its columns and front door in expressive and vibrant colours. The illuminations here will be changing quite frequently, so definitely worth a visit or two!

Both lightshows are performed daily from 5 pm to 1 am through January 31. 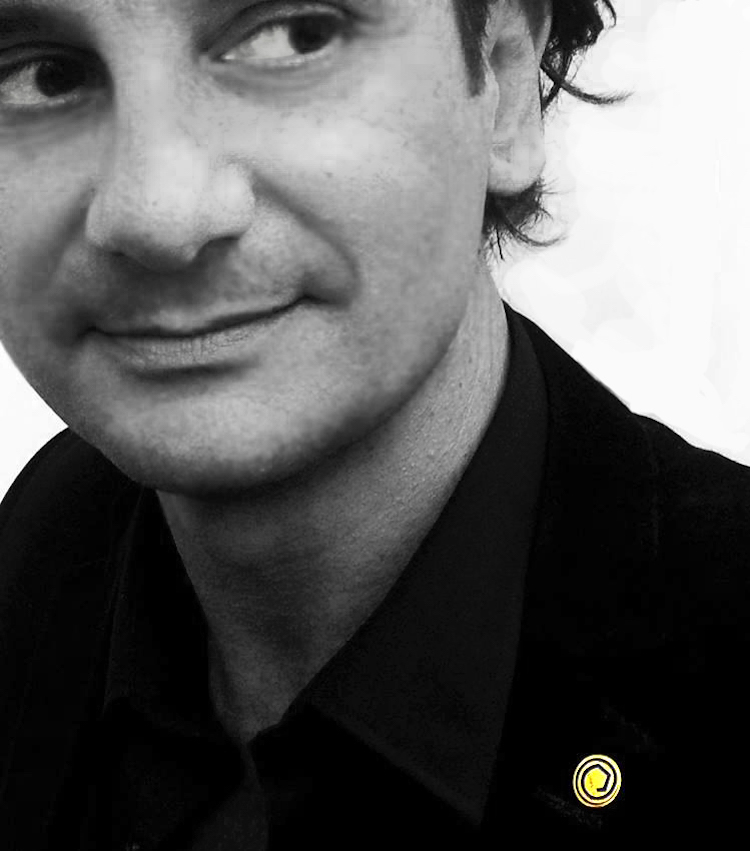 Born in Antibes, raised in Nice, having lived in Brazil, but identifying as “italianissimo”, Gaspare Di Caro has earned worldwide recognition as a luminographer whose ambition is to join art light and the reduction of luminous pollution. It was the unique, mellow, pink-and-golden light of Nice that first inspired his interest in working with the fleeting medium. He found his “manual” in the camera obscura, an old technique used by great masters of painting and architecture, such as Leonardo da Vinci, Michelangelo, Caravaggio, and Brunelleschi. It allows Gaspare Di Caro to project light into a perfectly delimited space as if it was “tailor made”, reducing light pollution as much as possible. He also gleaned inspiration from modern artists of various genres, such as film directors Ettore Scola and Federico Fellini, writer Samuel Beckett, and architect Oscar Niemeyer. Some of Gaspare Di Caro’s work are considered masterpieces, such as the lighting of Christ, The Redeemer, in Rio de Janeiro, where the artist gave, for the first time, a face to the statue. He is also responsible for the illumination of seven Niçois hotels.