There is no better way to appreciate spring than by visiting the regional garden festival across the communities of the French Riviera, resplendent with colour, life, and creative genius

2021 may only be the third time that the Festival des Jardins takes place but the two preceding editions quickly catapulted it to the top of the hit list of popular events on the French Riviera. Yet, it was definitely not a given that it could actually go ahead this year. Too many uncertainties around the development of the health crisis. But just as there is no stopping nature, there is no stopping determined landscapers and garden designers. And thus – fortunately just in time to coincide with the lifting of some of the pandemic-induced restrictions – the third edition did actually open in early May. For one month, through June 9, an international competition of ephemeral landscape creations exhibited in public gardens of the Alpes-Maritimes and the Principality of Monaco presents a veritable “Best Of” that Mother Nature and human ingenuity has to offer.

The brief to participating landscape designers: Highlight the cultural heritage of the Côte d’Azur through the discovery of gardens, flora, species and plants typical of the Mediterranean climate; position the Alpes-Maritimes as one of the leading destinations for garden-related tourism; introduce a wide public to the know-how of landscape and horticulture professionals, and raise awareness among the general public about the management of this type of heritage and about good, environmentally sustainable practices that respect the environment. Upon presentation, three juries (official, professional, and media) would bestow seven recognitions, in addition to a “Green Deal” award. Among the judges, Jean Mus, the Côte d’Azur’s very own world-renowned landscape designer. 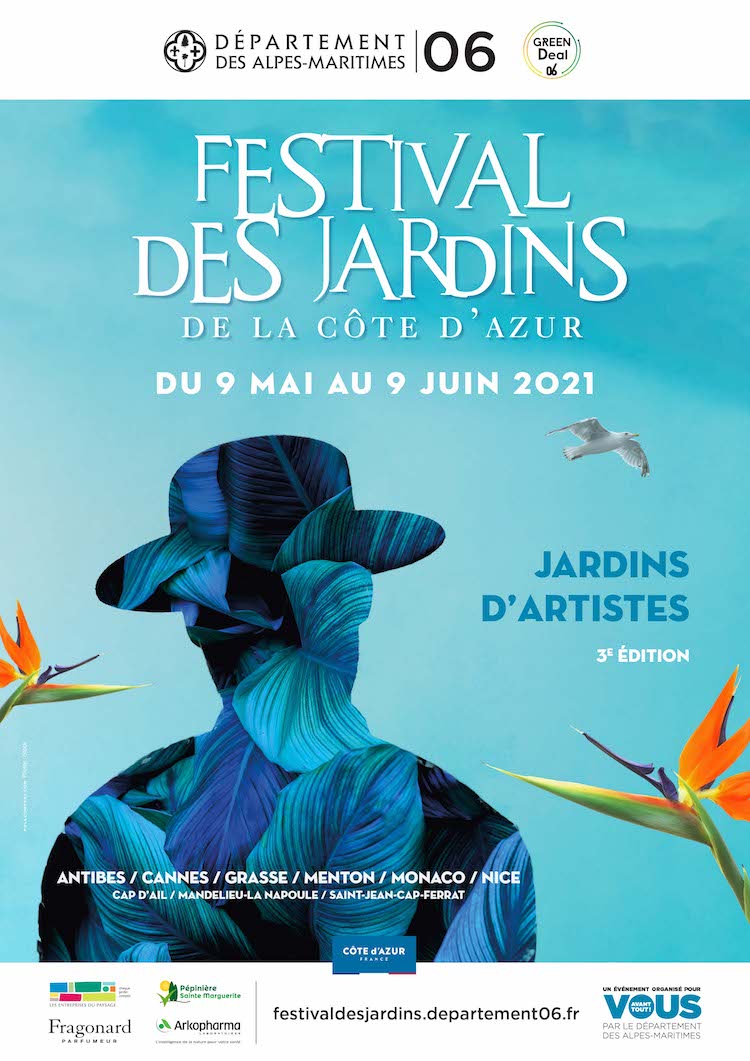 But what sounds very technical on paper, has led to magnificent results:

In the garden named “Danseuse plastique”, designed by Julia Georgi (aka Nerantzia Tzortzi) and the Politecnico di Milano, the artist has revisited Henri Matisse’s collage “Dancer” (1937-1938) to compose a Mediterranean artists’ garden. The arrangements make a reference to certain characteristics of the Mediterranean Sea: its beauty and treacherousness, the sacredness of memory and the threat of oblivion; canes and reeds, voluminous plastic waste, destroyed vessels of traditional fishermen or refugees lost at sea – cycles of life and destruction are intertwined in the meandering garden. This design won the Professional Jury award.

Also in Antibes, “Meeting the Senses” by Finnish landscape designers Kairi Meos, Heidi Hannus and Svetlana Lavrentyeva features three organically shaped islands covered with Mediterranean plants around the inner areas. Most of the materials used are natural and recyclable. The artwork seeks to express feelings of love, and the pairing of art and plants is intended to stimulate the senses.

In the manner of Matisse, the “Folie Folia” garden by Livia Kolb and Virginie Alexe is imagined as a collage on a large sheet of paper. Tinted in blue hues, the plants reflect the azure of the Mediterranean. They leave an imprint of their physical shape on the canvas through the photographic process of cyanotype. This garden was the official jury’s coup de cœur. 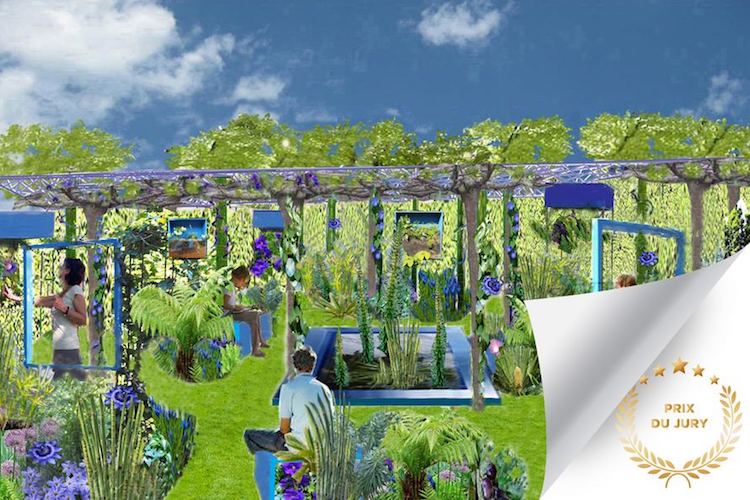 The second garden in Cannes is the winner of the official jury’s award. “Complantation/Contemplation”, created by Catherine Baas and Christophe Tardy envisages a garden in which visitors can wander freely between different eras and discover “complantations” based on the cultural practices of antiquity. Interwoven plants create a protective veil, an intimate space where the public can come and sit down on sculpted seats that invite to contemplation.

“La Fibre artistique” by Elodie Cottar and Marion Hintzy is the winner of the “Green Deal Award for Eco-responsibility” and the media’s coup de coeur. It highlights fiber as the bond between the creation and the artists, the plant and the canvas, the visitor and the garden. Both monumental and personal, this garden offers an immersive experience of the process of creating woven fabric, moving from the real landscape to the artist’s intimate space. This introspective walk through density stages the relationship with time, the sensory, and the body, with threads that don’t create boundaries.

The second creation in Grasse, and the one taking home the “professional jury award”, is “Un Aperçu de Paradis”(“A glimpse of paradise”) by Johan Picorit and Ambroise Jeanvoine: the pair imagined a monumental painting of a dreamy garden by Douanier Rousseau. The path, lined by imposing objects, winds through mysterious foliage. A hut and a clearing invite you on a contemplative journey to distant lands. 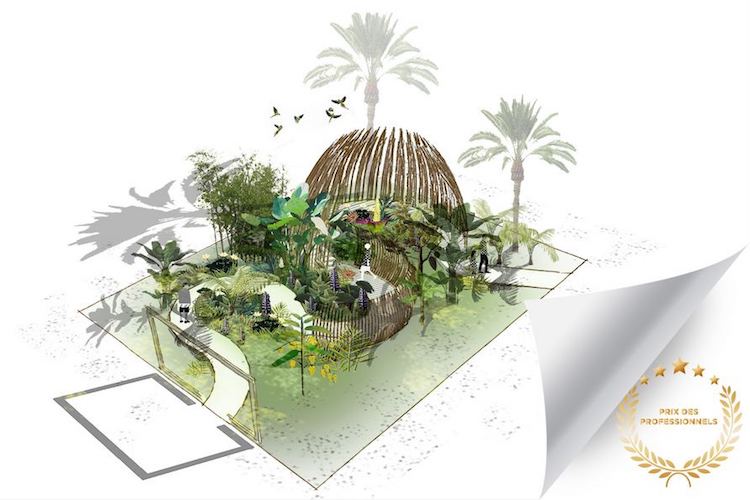 The garden named “Rendez-vous chez l’artiste” designed by Johanna Bonella and Abel Flosi is the winner of the media jury’s prize. Here we watch unfold what happens in an artist’s studio while he is absent, off on the road in search of inspiration. Nature awakens, always vibrant and in motion, and the garden comes to life and grows. Left untended, succulents, herbs, climbers and forest plants intertwine with the objects in the studio, growing to form a 3-metre tall amphitheatre of plants.

Menton’s second garden, “Artistic hybrids” by Aurélien Davroux and Michel Lopez is reminiscent of the Côte d’Azur as home to the Russian community and its artists since the 19th century. As soon as visitors enter the garden, they are transported to the tundra and the taiga, and are then drawn into a giant travel trunk, a symbol of this migration. A wall of the trunk has fallen away and is a patio opening onto the Mediterranean, its exotic flora and the local garrigue. The garden becomes a metaphor between art and nature, between Russia and the Mediterranean. 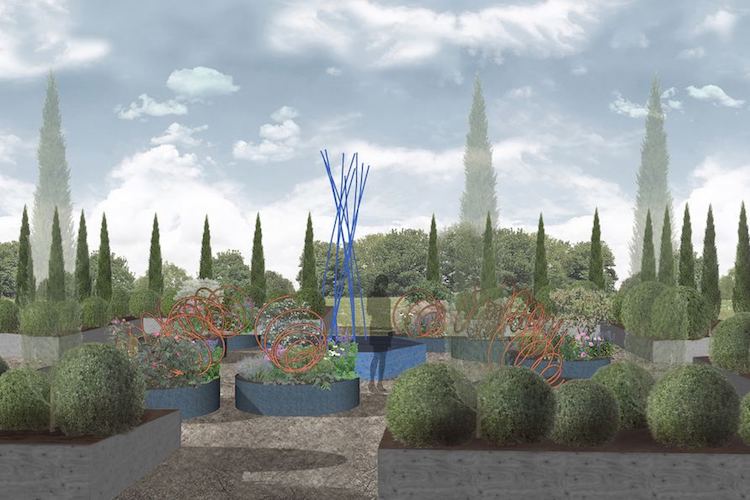 In Vincent Confortini and Louise Lefebvre’s “The Orientalist’s Garden” the visitor follows the painter in his studio: a comfortable reading room, a shaded jasmine gazebo adorned with motifs, a portrait room, an orchard enlivened by the scent of aromatics and citrus fruits, a small pond with a relaxing musicality… The path through the garden multiplies frames: large perspective, field, counter-field, counter-plane, and seating in close proximity to nature to focus on its details.

“Where the plants tell the tales” is the second garden in Nice, designed by Italians Andréa Russo and Vincenzo Nard. Inspired by Giovanni Boccaccio’s literary masterpiece “The Decameron”, it relates the story of a group of young Florentines who in their quest to escape the contagious plague leave the city and settle in a quiet villa in the Tuscan countryside. The project symbolically represents Boccaccio’s garden with ten circular beds and ten plants, representing the ten young people.

And all good things come in threes: Italian artist Daniela Donisi invites visitors on a discovery of “The Labyrinth of the Muses”, symbolizing her own path she followed. From the desire to express oneself comes inspiration, that vital spark of creativity that allows her to transform shadow into light.

“Libérez les nanas” is Christophe Gautrand homage to the French artist Niki de Saint Phalle by placing “Nanas”, large tree-sculptures of atypical and varied proportions representing the diversity of women and the liberation of female bodies, at the heart of his creation.

Monaco’s second garden “From one dream to another”, is a reflection of the inspiration that Chinese artist Maggie Wu Wai Chung draws from surrealist artists such as Salvador Dali, René Magritte, and the poet André Breton. They all used ordinary objects in an unusual context, giving new meaning to familiar things in order to create poetic imagery and evoke mystery. In this garden, several pink doors, deliberately clashing with the scenery of the French Riveria, create a poetic and artistic touch, opening the gates as if from one dream to another.

Other gardens, not in the running

In parallel, the communities of Cap d’Ail, Mandelieu-la Napoule and Saint-Jean-Cap-Ferrat also created eleven ephemeral gardens that do not compete but simply invite visitors to enjoy the splendors of nature, which – after so many months of deprivation – is all the more appreciated.