A romantic story, rooted in a profound love for France’s amazing musical heritage of the 20th century, is fast becoming a world sensation.

French chansons are synonymous with Paris, and Edith Piaf, Yves Montand, Jacques Brel, or Charles Aznavour are household names. It would take a Niçois art production company though to turn their songs into a musical comedy – a show which has become an international phenomenon in just a few short weeks since its pre-première in Nice in August. And after just coming back home from a triumphant tour through Mexico, leaving a trail of adoring fans and enthusiastic media behind, ‘Paris! Le spectacle’ is already eagerly awaited in Japan, South Korea, and China.

Behind this spectacular success: Gil Marsalla (pictured above) and his company Directoproductions. Gil, the son of a well-reputed Niçois artist family, is by far not an unknown personality in Nice, and music is in his blood. He was “born on stage”, as he describes his background, and he grew up surrounded by the performing arts, singing and playing the piano himself. The orchestre des variétés was an integral part of his childhood and youth, “a beautiful school of music”, as he calls it. Still, he initially pursued more intellectual studies, getting a masters degree in sociology and anthropology at the Université de Sophia-Antipolis.

It didn’t take Gil too long though to trade in his academic pursuits for his true love, the stage. He also wanted to find a way to integrate his other big passion, travel, and embarked on a career as an artistic director, selling shows. Fourteen years into that, he ventured out and founded his own company, Directoproductions… and the date would coincide with one that would forever be etched in people’s collective memory: September 11, 2001. Directoproductions started out with nothing but grew organically, and developed at a slow and steady pace. “We are fully self-funded, 100% autonomous, and not dependent on anyone. That way , we can pursue our own creative vision,“ Gil says, with justified pride. 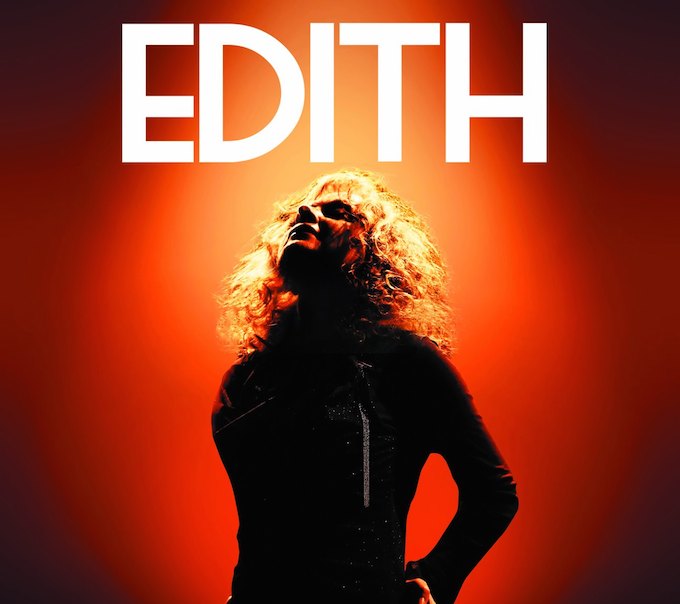 In that spirit, Directoproductions developed a series of shows that quickly earned an excellent artistic reputation and soon toured internationally, earning cheers and enthusiasm wherever they went. Among them ‘Edith, le spectacle‘, the story of France’s favorite chansonnière… masterfully interpreted by Jil Aigrot. In 2013 alone, Edith was performed 120 times around the world, from Paris to New York, Washington, Miami, Vancouver, Quebec, Montreal, Tokyo, Osaka, Prague, Istanbul, Israel, or Helsinki…to name but some of the cities where it enchanted public and critics alike.

Aware that French musical heritage is tremendously popular the world over, Gil wrote and produced ‘Paris! Le spectacle’ – a story set in the World Capital of Love, told through the 30 most beautiful French chansons, and illustrated by the vintage dances that have helped make this artistic genre so famous – from cancan to apache, by way of the black jazz scene and the nascent rock & roll era. The audience is whisked off on a journey straight into the heart of Montmartre to the tunes of an orchestra led by the quintessential French accordeon. We accompany the protagonists over decades as we follow Françoise, a young woman’s dreams to become a singer, her encounter and friendship with Edith Piaf, her blossoming romance with her beau, Jules, and of course, inevitably, heartache… all set against the historic background of the war-torn 20th century, represented by impressive black and white photography of the era. 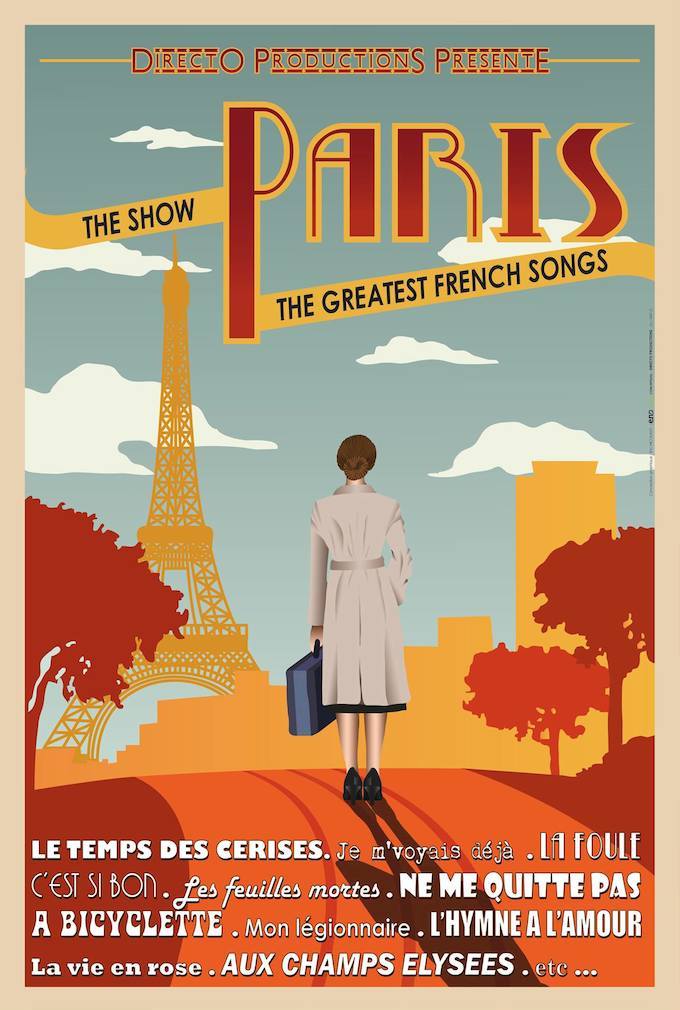 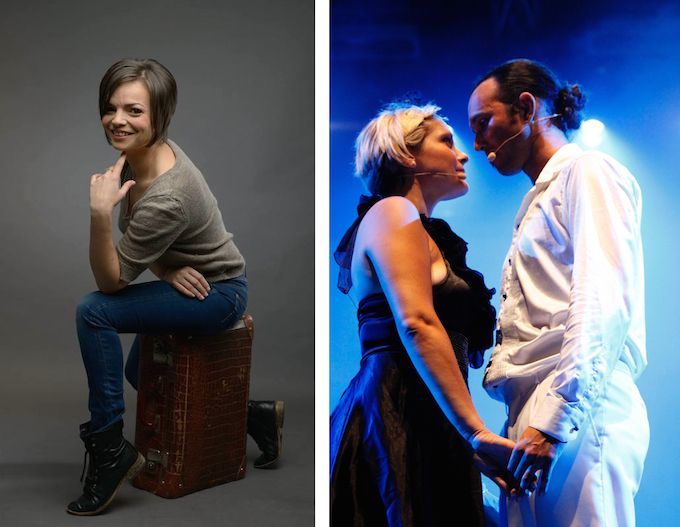 ‘Paris! Le spectacle’ moves you like few other shows do. And it does so not only because of its vibrant artistic ambience or the homage it pays to French musical heritage but because you feel the heartblood the artists pour in. In the roles of Françoise and Jules, both delivering exquisite dance performances, we find Stéphanie Grison-Impoco and Julien Grison, long time cast members of Directoproductions. Anne Carrere (pictured above – left) on the other hand, who plays Edith Piaf, is a recent discovery, and one Gil didn’t have far to look to find… this 28 year old singer comes from the Var, and is “the artistic revelation of the show, with a voice like the young Piaf”, according to Gil and Germaine Ricord, who was a support singer for Edith Piaf for three years. The five-piece orchestra and the tech team also do more than just their fair share to turn Paris! into a unique, one-of-a-kind experience. It is very clear that this équipe shares more than just a date on stage – this is a true team where one carries the other, and that may have to do with Gil’s philosophy to treat his troupe like family.

But beyond being an artistically and technically excellently presented package, the show receives standing ovations the world over because it appeals to universal emotions and an identification with music many of us grew up with. The recent tour through Mexico and he sensational reception there was only the beginning – Japan, China, and South Korea are already on the itinerary for this year and 2015, and more travel plans are in the wings. Gil even provides subtitles for foreign audiences so they can savour the experience even better. 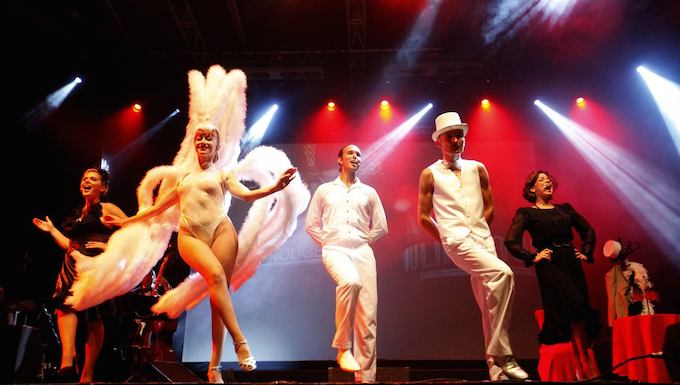 Why so many international tours, instead of performing such quintessentially French cultural events in their motherland? “France is quite aloof in that respect. Although we French are proud of our culture, French artists or themes are initially not as well respected in our own country as abroad, and in order to get appreciated at home, we first have to make a name for ourselves internationally,” Gil tells us.

That may be true in general but this talented Niçois group is still very much beloved at home, and for all their international success, Gil and Directoproductions do not forget their home turf. Before setting off to Mexico, Paris! pre-premiered in Nice at the Théâtre de Verdure in August, much to the delight of a clapping, cheering, enthusiastic, charmed audience. And in 2015 – the centennial of Edith Piaf’s birth – Edith, le spectacle is coming to town. Rendezvous to note specifically for the Niçois public : December 9th, 2015 – the Sparrow of Paris’ 100th birthday – at the Opéra de Nice. We do hope though we’ll be treated to many more of Directoproductions’ work well before… a brightly shining star on the Niçois cultural horizon.