With the new season opening just around the corner, the Nice Philharmonic Orchestra has two important reasons to celebrate. Not only does the 2017-18 season mark the 70th anniversary of the Philharmonic, but it also welcomes a new Music Director.

The new Music Director in question is Hungarian conductor György G Ráth, one of those gifted conductors whose artistry embraces opera, oratorio and symphonic music – and he’s proved himself equally adept at all genres. His early career got off to a flying start when he won the International Toscanini Competition in Parma in 1986, and since then he has built up an extensive repertoire which includes music from Bach to Bartók, and operas by Mozart, Verdi, Puccini and Janaček. He has appeared with some of the most prestigious orchestras on some of the finest international stages, and with world renowned artists.

In 2011, at the Hungarian State Opera, Maestro Ráth led the first 3D production of Béla Bartók’s opera Bluebeard’s Castle, the same year in which he became Choirmaster of the Budapest Philharmonic Orchestra. Whilst there he re-constructed and directed the original version of Mahler’s First Symphony, entitled Symphonic Poem in Two Parts – for which he received a doctorate in the Liberal Arts from the University of Pécs. Maestro Ráth presided over the 160th anniversary of the Orchestra in 2013, and in the same year was appointed Head of Music of the Hungarian State Opera. 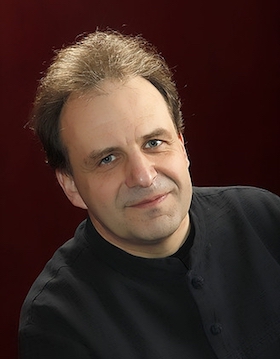 György G Ráth makes his debut as Music Director of the Nice Philharmonic Orchestra in the first symphony concert of the 2017-18 season, on 29th and 30th September.

This performance opens with Fanfare for the 70th anniversary of the OPN, a commision from French composer Georges Gondard, who – appropriately – was born in Nice. Much of Gondard’s music has been written for the world of film – compositions by Hollywood composers such as Jerry Goldsmith, Leonard Rosenman and John Williams having been among the early influences on his work, along with Stravinsky’s The Rite of Spring.

Georges Gondard has a number of film scores to his credit, and highlights of his career include a request from composer Bernhard Elsner to co-write the music for the TV documentary When the world spoke Arabic. More recent compositions have included the scores for the short films Ovnivores and Evil Date, and Georges Gondard has also composed works for chamber ensembles, and created a suite in four movements from his score for the film Esprits de famille.

In another salute to the Orchestra, the work which follows is also a world premiere, written for the Philharmonic’s celebration, and commissioned from Norwegian composer Martin Romberg. Entitled Fëanor, it is representative of the inspiration which Romberg draws from mythology, fantasy art and literature, and folk legends, the main emphasis being on works by J R R Tolkien. Fëanor is one of the characters from Tolkien’s book The Silmarillion.

Among Romberg’s many achievements and commissions, his Symphonic Overture Véttir won De Unges Konsert in 2006, and was performed by the Bergen Philharmonic Orchestra. He was awarded the 2007 Paul Woitschach Förderungspreis, and his Poemata Minora was selected work of the year by the Norwegian association of popular composers in 2016. Martin Romberg has also been commissioned to compose and conduct a new music library album based on Norse legends with the London Session Orchestra at Abbey Road Studios in London, in February 2017.

Adding to this wealth of talent is the acclaimed Italian cellist Enrico Dindo, who – at the age of just 22 – became the principal cellist of the Teatro alla Scala Orchestra in Milan, a position he held for 11 years. In 1997 Enrico Dindo was awarded First Prize at the Rostropovich Competition in Paris, following which the great Russian Maestro described him as “a cellist of exceptional qualities, a complete artist and a formed musician, with an extraordinary sound which flows as a splendid Italian voice”.

In 2000 the National Association of Musica Critics in Italy awarded Enrico Dindo the Abbiati Prize for best soloist of the 1998-99 Season, in 2004 he was named overall winner of the Sixth International Web Concert Hall Competition, and in 2005 the President of the Italian Republic awarded him the Vittorio De Sica Prize for the music. Since 2014 Enrico Dindo has been Principal and Musical Conductor for the Croatian Radio Television Symphony Orchestra in Zagreb.

In this opening concert of the Nice Philharmonic’s new season, Enrico Dindo plays the somewhat sombre, but dramatic Cello Concerto No 1 by Dmitry Shostakovich, which he dedicated to Mstislav Rostropovich, fulfilling a long-held wish by the master cellist. The programme ends with Tchaikovsky’s heartbreakingly lovely Symphony No 6, Pathétique, so named (by the composer’s brother Modest) for the emotional outpouring so evident throughout the work.

György G Ráth conducts the Nice Philharmonic Orchestra in the opening concert of the 2017-18 season on 29th and 30th September at The Opéra de Nice. Further information, along with booking details, can be found on the Opéra de Nice website.