Temperatures are rising in Sanremo, spring is in the air, but it is also time for the annual Festival della canzone Italiana di Sanremo.

The ever popular Sanremo Italian song festival will be held again this year from 12th – 16th February. Well beloved throughout Italy and beyond, the festival has launched the careers of many incredibly famous Italian singers, including Adriano Celentano, Zucchero, Eros Ramazzotti, Matia Bazar and Andrea Bocelli. The event also showcases new Italian fashion trends, as well as promoting the so called ‘Italian Lifestyle’.

The song contest began in 1951 in the aftermath of the Second World War, and has been held in Sanremo every year since. The first edition had only two participants, Nilla Pizzi and Achille Togliani, supported by Duo Fasano. Things have certainly changed in the intervening years, and nowadays we are treated to a real extravaganza of music, fashion, entertainment, and award ceremonies to rival even Hollywood!

The Sanremo Music Festival is always an Italian entertainment experience, and there’s no excuse for missing the singing or the spectacle – it will be broadcast each evening on television. However, watching the proceedings from the comfort of your armchair certainly does not compare to getting up close and personal with the talented beauties of the festival. 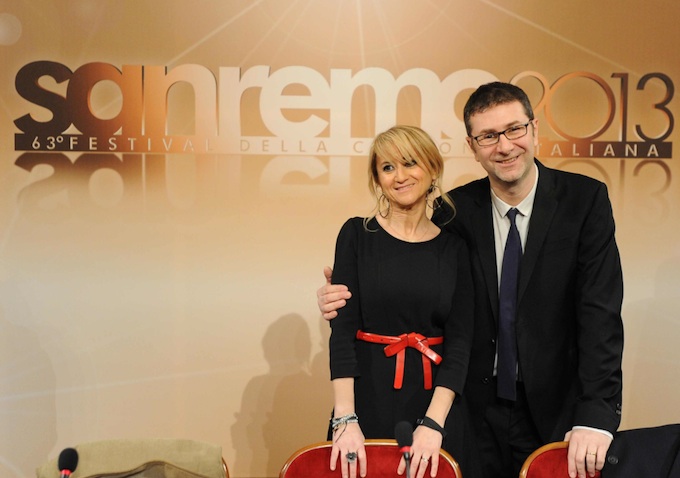 Fabio Fazio will host the show this year, ably assisted by Luciana Littizzetto (both pictured above), in the Teatro Ariston, where the festival has been held every year since 1977. It is almost like the Grammys of Italian Music. The competition is split into two sections, the ‘Big Artist‘ (Campioni) section and the ‘Newcomer section‘ (Giovani).

The nominations for the ‘Big Artists‘ category for the 2013 festival include Almamegretta, Annalisa Scarrone, Chiara Galiazzo, Daniele Silvestri, Elio e le storie tese, Malika Ayane, and Simona Molinari with Peter Cincotti. A full list of the artists and their songs is available on the festival website.

The last years have been surely characterized by the participation of artists who already have some degree of fame from popular television shows, and the final results of the televoting reflect the influence these artists have over their fanbase. This influence cannot be eliminated, and Sanremo is only as guilty as other televison shows in this respect. Suffice to say that Sanremo adapts to change, and grows according to these changes. After all, this is what makes it such an interesting festival to watch each year!

Eros Ramazotti dominated the ‘Newcomers’ category in the 80’s. “Terra Promessa” marked the start of a great career, a song recalling the aspirations, ambitions and dreams of the younger generation.

And as we remember times past, we think of the late Whitney Houston performing  ‘All at Once‘, which remains very much etched into the history of the Festival, with the audience demanding an encore – something that had never happened before.

All images courtesy and © RAI.tv World