A German-American woman’s grassroots movement which started in the trunk of her car is rippling across the globe.

Pardon our uncharacteristic use of strong language but there is just no other way of talking about Maike Both’s work: Her mission in life is to Unfuck The World, and that’s also the name of the global movement she started a couple of years ago. And lots of great progress has been made en route.

It may be her Hanseatic, seafaring family’s genetic heritage that left its traces on Maike. She – who grew up on a freight ship, fittingly has a last name which in German is pronounced as in “(Das) Boot”, and jokingly refers to herself as Maike Longstocking after the free-spirited, independent heroine Pippi of Astrid Lindgren’s children books – heeded her taste for foreign shores early on. 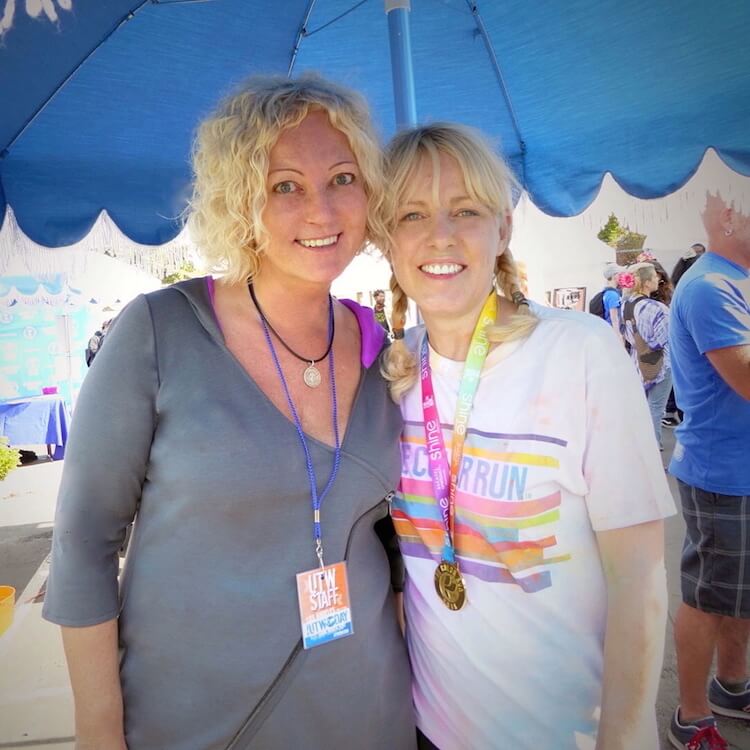 And those were a long way from her native Hamburg: Los Angeles. Equipped with nothing but two suitcases, she arrived there in 1992, and has since made it home. She started out by managing music bands, then switched to the film industry which she is still working in as a set decorator. But deep down she had a burning desire to contribute to social change in a meaningful way, and when that opportunity came softly knocking on her door one day in 2006, Maike opened and welcomed it arms wide open.

“It all began quite inconspicuously. Just for fun, we had put the slogan “UNFUCK THE WORLD” on a couple of shirts to wear them to a local event. The response was unbelievable. Total strangers smiled at us, gave us thumbs up, people crossed the street just to tell us, “Great motto!”

And then a friend said the magic words, “You should sell those shirts!” – “Wow, that really spoke to me. I got goose bumps, and when that happens, I usually take note,” she remembers her first ginger steps into the world of social change. 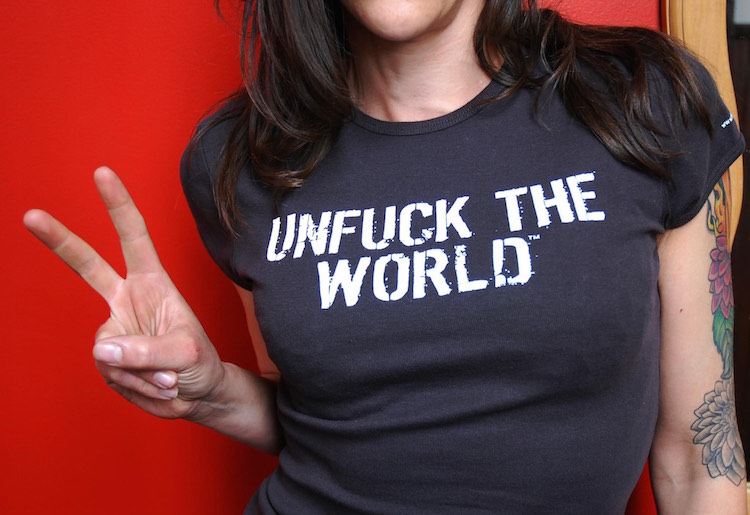 So, heeding her instincts, she promptly jumped into action. She had 100 t-shirts printed, which flew right out of the trunk of her car, and the proceeds were donated to charity. In response to the tremendous interest, Maike soon officially turned her newfound hobby into a fulltime business, now somewhat more politically correctly called Change The World T-Shirts.com. And in keeping with the spirit of solidarity, “we offered people who bought our t-shirts a choice of three charities, and donated part of the profits to these organizations. Our motto: Changing The World, One T-Shirt at a Time.”

In 2007, Hollywood experienced its infamous screenwriters’ strike, and that involuntary break sent a message to Maike: she felt she was burning out. So she decided to leave the world of celluloid behind, at least for a while, to dedicate herself fully to her true passion, and did well, very well. Not necessarily financially but she was happier than ever, knowing how many lives she could touch in a positive way.

Oh But Wait! That was only the beginning! Maike isn’t done yet. In February 2012, she improvised what she nicknamed an Unfuck The World Day – basically just a team effort of goodwill actions. But seeing the massive positive response, her goosebump-o-meter went off again and niggled her into action to make this an annual event, and she set out to organize the first official global Unfuck The World Day in June 2013. And what started out as a handful of freestyle events from Los Angeles to Hamburg, from Reykjavik to Melbourne, and a few places in between, has since become a worldwide phenomenon within just two years, taking place simultaneously across the entire globe. One of the standout events in Europe, the Dublin UTW Day, hosted by French native and now Dublin-resident Emilie Sparacca, a full day of fun, music, and encounters at the D-Light Studios. 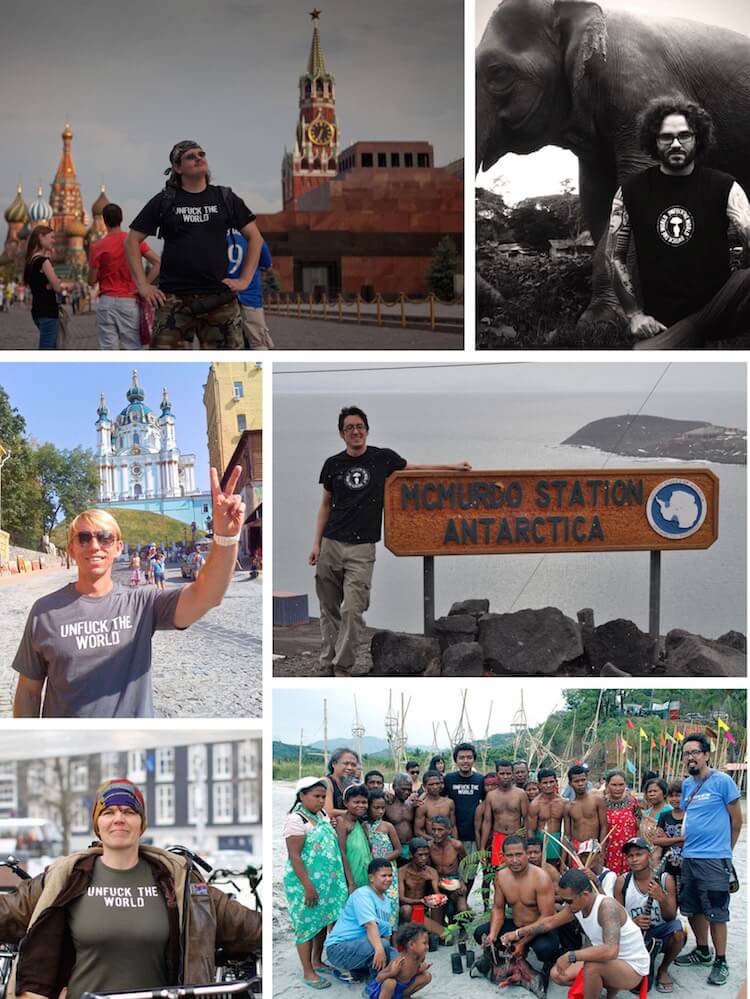 “UTW Day is dedicated to all the people who are awakening, who get up, go out and make this world a better place,” Maike explains. The concept is simple: Organize an event or a party of whatever nature you want – from backyard BBQ to stadium concert. Choose a local, charitable organization that will benefit from it, such as a homeless shelter, foster home, battered women’s house, pet shelter, environmental organization. Charge a mandatory donation for admission or have guests bring in-kind donations such as canned goods, clothes, toys or pet food. If you prefer to organize a direct, positive action tree planting, beach clean-up, playground beautification, passing out food or blankets to the homeless etc., that’s fine, too. Just contribute something positive, or whatever nature, to make this world a bit of a better place.

But wait, there is more – Maike isn’t done yet. She has a particular desire to provide not just hand-outs but real, concrete opportunities to people in need. So she created a non-profit organization, A Million Drops. Based on the principle that if everyone contributes just one drop, we can create a sea of change, A Million Drops is dedicated to providing direct, individual support to the homeless and at-risk youth and young adults in Hollywood who want to change their situation for the better and need a helping hand to do so.

“Our goal is to open the A Million Drops Center, a safe place where we can provide these persons services on a daily basis. We offer things as simple as free haircut days that make such a difference. Dignity is important to anyone, but especially to them. We also have an onsite second hand thrift shop. And we are in talks with other local organizations about turning a retired Metro bus into a mobile shower bus, based on the Lava Mae model that has successfully worked in San Francisco. In the meantime, we also provide assistance at monthly scheduled events, such as Laundry Love Hollywood, as well as through one-on-one support to the individuals we regularly work with,” the dynamic German-Los Angelena describes her current initiative to create social change through direct action.

And you know what’s coming now: Maike isn’t done yet. She knows that one of the many ways to help the at-risk population is to restore and nurture dignity and self-reliance, and so wearing the A Million Drops hat, she recently organized “Unsheltered”, an exhibit of artwork by the homeless and young adults of Hollywood at Wallspace Gallery in Los Angeles. Wallspace is owned by none other than British former tennis pro and Olympian Valda Lake. The display became a roaring success, so much so that a prominent French art exhibit organizer spontaneously offered to feature the winner of a 2016 Wallspace competition at a high-caliber art salon in Paris. 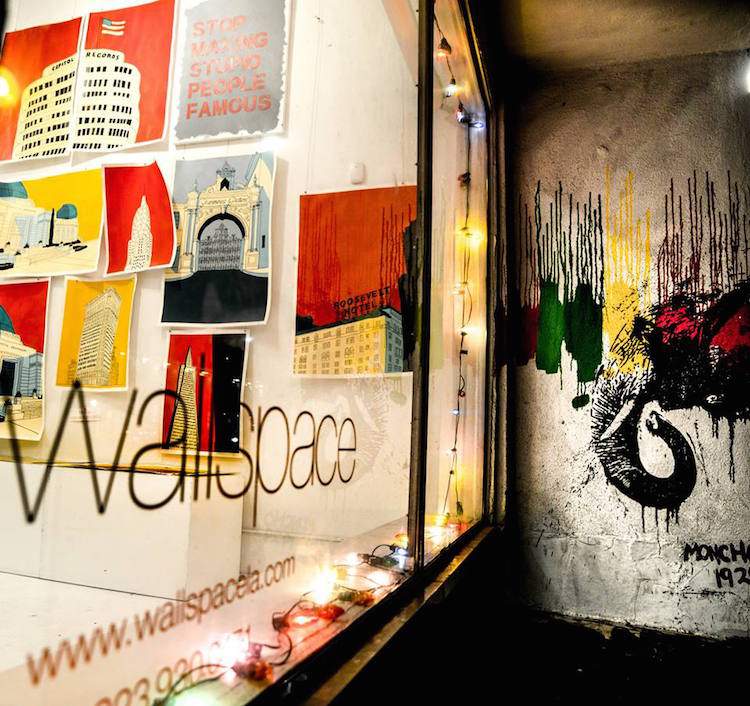 So what’s next on Maike’s ever-busy mind? “Oh, lots! It’s all work in progress, a living being. The vision is taking shape as we go along, and as we see where the biggest needs are.”

All these activities, and their incredible impact, have motivated sponsors and donors who heard Maike’s message, “The world needs to be unfucked NOW. We cannot sit and wait until others do something or donate money. We all have to do something, no matter how small the contribution or activity. Just do something, Now. It’s easy but most of all, it’s fun.” Fun is big in Maike’s life. She is far from a proselytizing do-gooder, she just acts, and whatever she touches has a low-key, cool feel to it. That may be her secret sauce in engaging with the young generation that will be instrumental in upsetting the current world order. And quite unbelievably, in all of this she still finds time to do a regular daytime job, back on set in Hollywood. 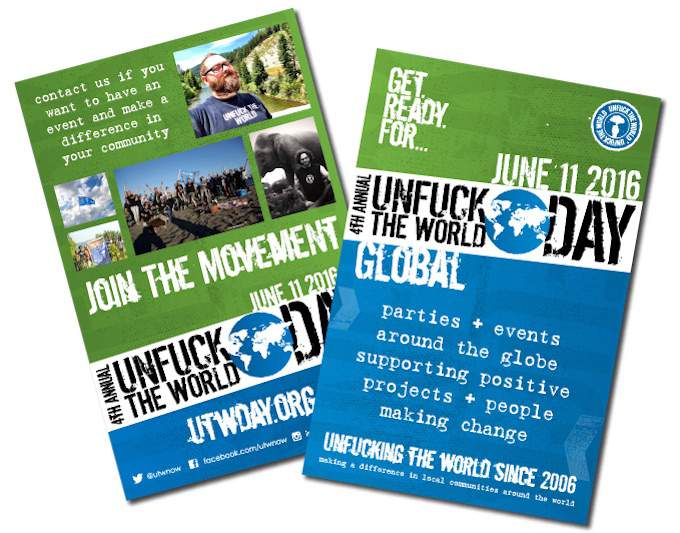 If you want to be part of this global movement, your big chance to do so is the 4th Annual UTW Day on June 11, 2016. Well, actually – no, your next big chance is right now. Just do something kind for the person in need across from you, or for our badly abused planet… today, and tomorrow, and the next day. Or maybe Maike’s great work inspired you to contribute to her A Million Drops non-profit organization: all donations are welcome no matter how big or small.

Any which way you choose to unfuck the world – every new morning holds the chance to bring about positive change in big ways and in small…. just like Maike does, daily.

For more information, including how to donate, visit the Unfuck The World website.