Amazing things can happen if you fortuitously run into Robert Calcagno, director of Monaco’s Musée Océanographique, in the middle of the Arctic

A trip to the northernmost shores of our planet is on most people’s bucket list, and yet few ever get to do it. The next best thing to seeing the Arctic in person is to visit an art exhibition based solely on the North, like the one currently presented at the Musée Océanographique in Monaco from March 1 through April 30. Over the course of more than a decade, Canadian artist-explorer Cory Trépanier has travelled 60,000 km through six National Parks and 16 Inuit communities to capture the spectacular landscapes of the Canadian Arctic. More than 50 of his oil paintings on display depict the beauty, remoteness, and fragility of his home country’s changing North, and discreetly seek to raise awareness for the threats to this mesmerizing landscape and its people.

Monaco is the exhibition’s first European destination after seven shows in Canada and three in the US since its premiere in 2017. The Principality, a world away from the icy North, may seem an unusual choice, but this was no accident. But getting there was a long and winding road. And on occasions it was a solitary ride in more than just one sense. To better understand the artist’s vision it helps to take a look at his background. 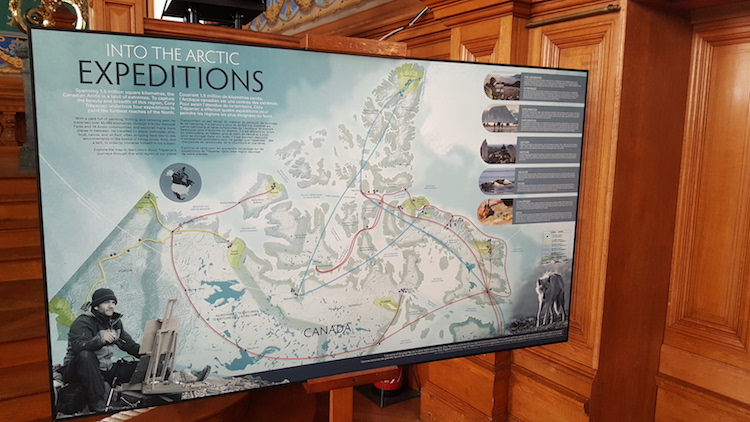 Born in Windsor, Ontario, in 1968, Cory got his first taste of the great outdoors through his parents, two French-Canadian nature lovers. The family went on regular weekend fishing and hiking trips, and it would become a lifelong passion for the young man. Drawing and painting was another one. Years later, with a degree in illustration from the renowned Sheridan College in his pocket, he set out working as an illustrator before drifting in the direction of nature-themed work.

The great shift from commercial illustration to fine art happened in 1997 when he took up painting the Canadian landscape in oils. Since then he has created over 400 oeuvres. His sense of perspective, his talent to capture the interplay of light and shadow, and his thoughtful use of pastel colors are remarkable; it is these qualities that help him give impressive endless Canadian vistas and monochromatic scenery depth and dimension.

“Exploring and painting the Canadian Arctic has been challenging and awe-inspiring, bringing me face-to-face with some of the planet’s greatest natural wonders,” Cory says. After many years of solitary development, he is still humbled to learn that others are being moved by his canvases, and knowing that the exhibition inspires conversation about the North, the indigenous Inuit population, the power of nature, and the importance of humanity’s role in protecting it.

He had first started to focus exclusively on his fine art in 2001 for a project called Coast to Canvas, leading to a first exhibition and documentary. His quest to paint the Canadian Arctic came next, when he launched his Into the Arctic project in 2006. All in all he has undertaken five expeditions to paint the furthest reaches of the North. With a pack full of painting, filming, and camping gear, and often accompanied by his wife Janet and two daughters Andie and Sydney, he has travelled by plane, helicopter, ship, boat, canoe, and on foot, stripping back day-to-day accoutrements to the basics of hiking boots, food, and a tent, in order to immerse himself in his subject.

Over time he has also witnessed the majestic glacier landscape transforming as a result of global warming. After his first visit to Coronation Fiord in 2007 and a second one in 2018, he stitched together mosaics of the photos he had taken on both trips, and when overlapping them, he realized how dramatically the location had altered.

An obvious question is whether climate change has a tangible impact on the lives of the Inuit. “Yes, of course. One example is that as the permafrost melts some the buildings post supports are beginning to collapse. These people are incredibly resilient and resourceful, true masters at adaptation to whatever challenges the environment throws them. But there are costs associated with this changing climate, and challenges ahead,” Cory says. 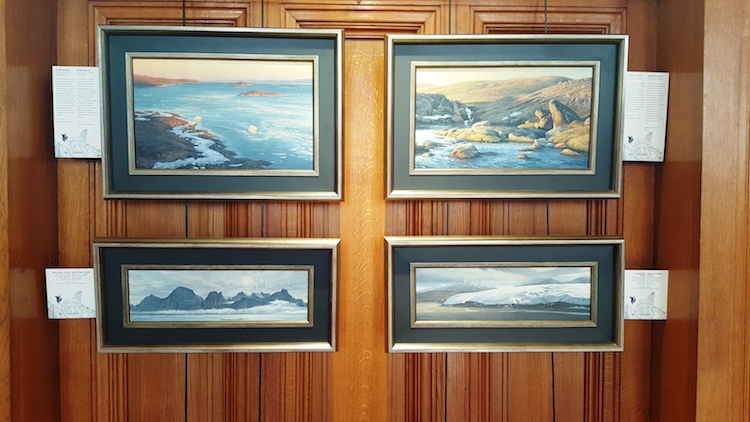 When Cory returned to the Arctic for his fourth painting expedition in 2015, little did he know that it would kick off a chain reaction which would ultimately lead him to the Mediterranean shores and to mounting the current exhibition. He is on Devon Island, the world’s largest uninhabited island  in the remote North of Canada, awaiting a pickup by ship. And none other than Robert Calcagno, director of Monaco’s Musée Océanographique, happens to be on that ship. When Cory shows him his developing collection of oil paintings and films, the museum director makes a mental note to mention Cory’s work to the Palace back home.

In 2017, HSH Prince Albert II, a lauded explorer and conservationist himself, receives The Explorers Club’s Laurel Thomas Award for his dedication to the protection of the environment and focuses on fighting climate change, promoting renewable energy, combating the loss of biodiversity, and preserving water resources through his Prince Albert II Foundation. On that occasion, Cory – by now the winner of several awards – meets the Ambassador of Monaco to the US and Canada at a dinner. And in 2018, an invitation arrives to present the first public screening of Cory’s documentary “Into The Arctic: Awakening” before the Monegasque sovereign in 2018. The Prince’s and Cory’s stories share parallels – Albert II’s great-great-grandfather Prince Albert I had been a pioneer in oceanography and scientific exploration of the Arctic. Prince Albert II had also personally witnessed the poles through his journeys to the Arctic and the Antarctic.

As a result of these serendipitous encounters, the Oceanographic Museum now proudly features Trépanier’s unique collection of over 50 oil paintings and three documentary films. The central piece Great Glacier, at almost 5 metres wide, is one of the largest oil paintings ever created of the Canadian Arctic. Prominently displayed at the head of the Salle des Conférences, the canvas presents the striking scene where the Coronation Glacier meets the ocean, flanked by mile-high mountains rising up on each side. All of these paintings except for the chef d’œuvre are on loan from private collections and have been traveling for the past four years. 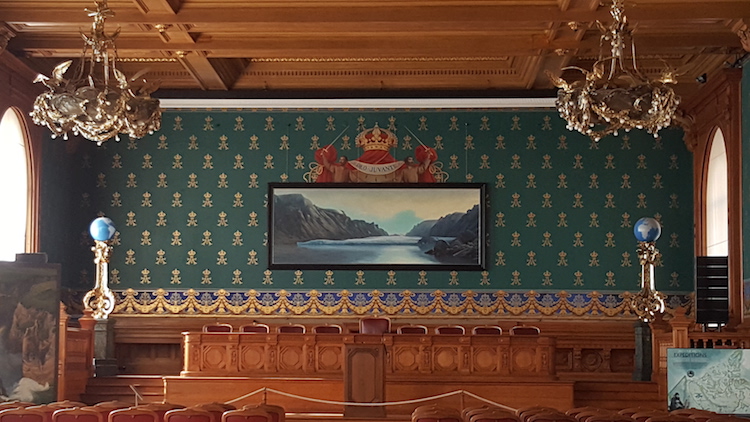 The artist greatly appreciates the support of Prince Albert II and the Oceanographic Museum to be able to share his vision of Canada’s Arctic, saying, “I hope that visitors fall in love with its beauty and fragility, because falling in love is the beginning of caring.”

For those unable to attend the exhibition through April 30, Cory Trépanier will publish a coffee table book also titled Into the Arctic: Paintings of Canada’s Changing North later this year. In the meantime visit his website, his Into the Arctic project website and his YouTube channel. He is also on Facebook, Twitter and Instagram.

“We have no choice: we must protect Arctic ice, enable it to continue to act as an essential temperature regulator for the planet, avoid the catastrophic rise in sea levels that would result from the ice melt, and stop the disappearance of permafrost releasing irreversible quantities of greenhouse gases back into the atmosphere. It is a duty to ourselves and to all of humanity -to our children, of course, but also all those who are already suffering the dramatic effects of these developments.” – HSH Prince Albert II of Monaco

Into the Arctic – Musée Océanographique, Monaco
Until April 30, 2020
The exhibition is supported by the Prince Albert II Foundation and produced by David J. Wagner, LLC