Another perspective of this beautiful country with a culture and civilisation that is very different to ours, but so spell-binding at the same time.

When Lorraine Davidson wrote an article about her trip to Japan earlier last year, I, like half the people I have talked to since, had no intention of visiting that country, at least not in the near future, as many other foreign destinations seemed to me way more appealing. I really enjoy Haruki Murakami’s books and indulge in sushi every now and then, but I have never been by any means what you would call a Japanophile. But I listened with interest to what Lorraine had to say and after finding out that many people in my inner circle were actually big fans of the country, I decided to jump the fence and to book myself a plane ticket for the Land of the Rising Sun.

And what a good idea it has been. I have travelled to many far remote places such as India, Latin America and Libya, but never before that trip have I experienced such a big culture shock and be blown away by another civilization.

Being in Japan in April during the cherry blossom season, the country’s iconic sakura, certainly added a festive and magical twist to my trip, as everywhere I went, I was surrounded by blankets of beautiful pink and white flowers and people were out celebrating. Knowing exactly when the trees will be in full bloom is not an easy task as the dates change every year, and differ from one part of the country to another. There are a few websites that can help you track down the weather forecast for each season and if you are a bit flexible, you can easily plan your trip accordingly. That said, Japan is a country that can be visited anytime of the year, and I have been told that fall with the maple trees gradually turning from a beautiful green into yellow, orange, and finally a shiny red, is also particularly beautiful. 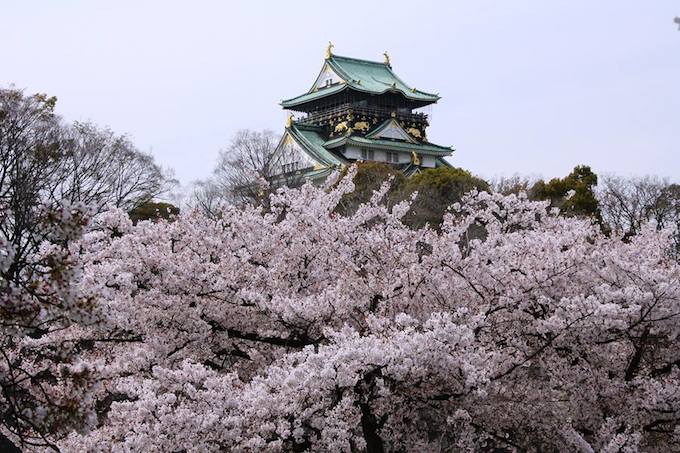 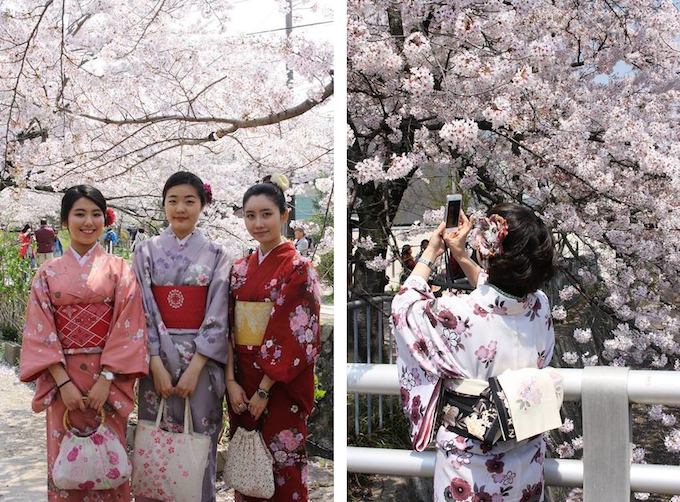 Aside from picking the best dates to visit the country, planning your trip ahead of time is also helpful for saving big bucks on transportation, as when you start doing some traveling, this is usually where the bulk of your budget is spent. Luckily, the Japan Rail Pass, which can only be purchased from outside the country and is sold in 7, 14, and 21 day increments, allows you unlimited travel on almost all JR trains, including all bullet trains, the Shinkansens. Upon purchase, you will be given a receipt, which can be exchanged at Japan Rail Offices at most stations in Japan (including all of the stations nearest to airports), for the Japan Rail Pass itself. You will save both a lot of time and money!

On the other hand and contrary to what most people may thing, eating in Japan is relatively inexpensive and so you should have plenty of occasions to sample a lot of different dishes in a very nice atmosphere. In Japanese culture, you eat with your eyes first so the visual presentation is almost as important as the taste of the food itself.

Japan offers a wide range of types of accommodation and for a perfect cultural experience, you should try at least one night in a Ryokan, a type of traditional Japanese inn that features tatami-matted rooms, traditional food, public baths and opulent meals. Or why not check in to a capsule hotel that basically contains nothing but a bed, a television, a shared bathroom and some coin lockers.

It is also true that a majority of Japanese people do not speak English, and since most signs are in Japanese and the streets do not always have a name, it can be a bit difficult to find your way around. But thankfully, Japanese people are also very helpful and do not hesitate to go out of their way to show you the right direction. As far restaurants, you will also usually find food models in the windows so even though the menus are in Japanese, you can always grab a staff member and point to what you want.

As long as you respect the etiquette and do not commit any big behavioral faux pas, people will treat you with upmost respect. Thank God some of my friends are familiar with all the do’s and don’ts of Japanese society, and they gave me some very good advice ahead of my trip. I thus knew that eating while walking down a street is considered rude and that leaving the chopsticks sticking straight-up in the food is a big no-no.

With that in mind, I was set to go, and if two weeks are not enough to discover all that the country has to offer, I nevertheless came back from my trip with wonderful memories and beautiful images engraved in my mind.

In Tokyo, I have experienced the hustle and bustle of the city with its high-rises, crazy fashion trends and huge electronic stores, but also discovered some quaint neighbourhoods with charming small streets and cute little shops. I have woken up early, and by early I mean 5 am, to go to the Tsukiji fish market, the biggest wholesale fish and seafood market in the world, to catch the live tuna auctions and enjoy a sushi breakfast. I have also taken the train during rush hour and been pushed inside by a station attendant whose job is to literally pack the train, and took a stroll in Ueno Park to participate in the Japanese pastime of hanami, i.e. cherry blossom viewing. Of course, I also had to live my own « Lost in Translation moment » and pass through the Shibuya crossroads, the busiest crossroads in the world.

South of the capital, in Hakone Park, I got to admire the nearly perfectly shaped cone of Mount Fuji. Just stunning! 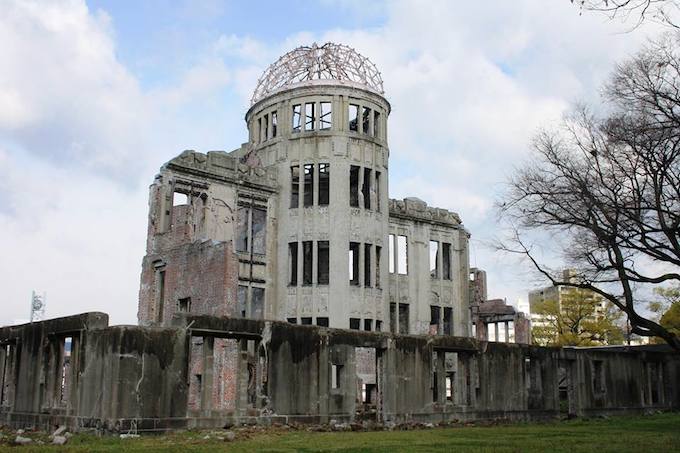 In Hiroshima, it was hard not to get emotional while visiting the National Museum of Peace, which tells the story of the bombing of the city by the Americans from the perspective of the victims. Without forgetting the role Japan played during War World II, the goal is to educate the public about the devastating effects of nuclear weapons. Aside from the many people who died when the bomb was dropped, many more developed illnesses in the following years due to radiation. One of those victims was Sadako Sasaki who was two years old in 1945 but came down with radiation-induced leukemia at the age of twelve. When hospitalized, Sadako folded paper cranes, which according to Japanese legend gives one health and longevity if one folds 1,000 of them. Sadako did not survive but a statute today pays tribute to her memory and that of all the other young victims of that tragic event. A few meters away, the Atomic Bomb Dome (pictured above) which what was once the Hiroshima Prefectural Industrial Promotion Hall and is the only monument still standing, is a chilling reminder of all the horrors of that fateful 6th of August, 1945.

Less than an hour away, Miyajima Island with its “floating tori gate” (see below) is definitively one of the most scenic spots in Japan. This is where I tasted the region’s culinary specialty, the Okonomiyaki, a thick savory pancake stuffed with cabbage, bean sprouts and meat or seafood that is being prepared right in front of you. Yummy! 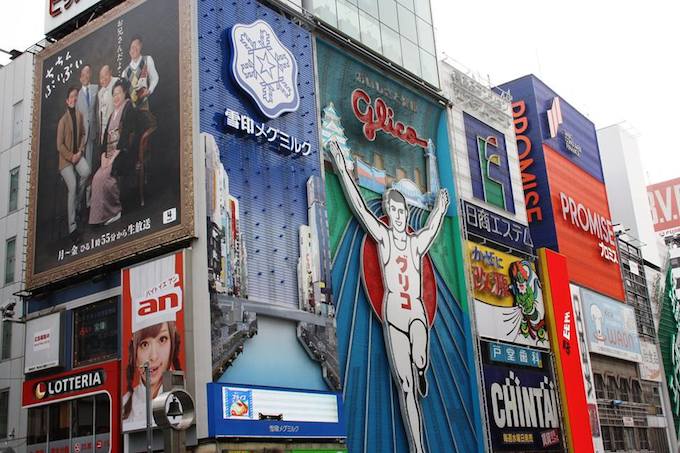 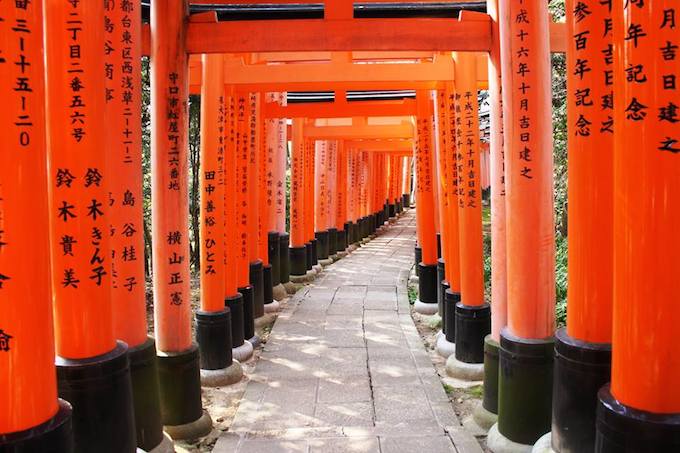 In Osaka, I got blinded by all the neon signs and in Kyoto, I got overwhelmed by the beauty of all the temples and the tranquility of the philosophers’ path which followed a canal lined up by hundreds of cherry trees. Not too far away, the ancient capital city of Nara is a must-see destination, with its numerous historic treasures and so is the Fushimi-Inari Shrine (pictured above) with its countless arcades of vermilion torii spread across a mountainous path.

The more I traveled around, the more I fell in love with the country. Unfortunately, all good things have to come to an end, and before I knew it I had to fly back to France. I do not know if I will be able to return to Japan anytime soon, but in the meantime, I have decided to learn Japanese while of course keeping on enjoying Murakami’s books and my regular dose of sushi! 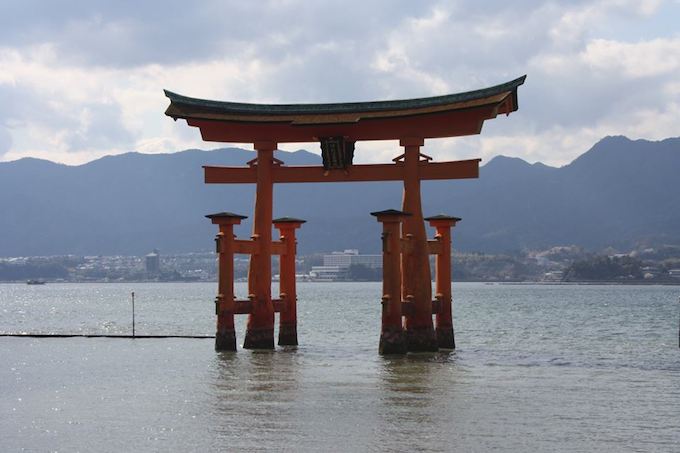