A couple of months into its three year maritime research voyage, the scientific team aboard M/V Yersin posts first results, and those are impressive.

In July 2017, the Principality of Monaco embarked on an ambitious project: Over its three year voyage on all of Earth’s oceans, a team of scientists and researchers on board of M/V Yersin is carrying out the most in-depth study yet on the state of the oceans of our planet. RIVIERA BUZZ accompanies the project along the way.

Overexploitation, pollution, plastic waste, ocean warming and acidification, endangered species, coral reef bleaching, ecosystem imbalance… our current lifestyle is putting a heavy burden on the world’s oceans and seas, and alarm bells are ringing. In July 2017, the Principality of Monaco, historically devoted to great maritime explorations, launched “Monaco Explorations”, an ambitious three-year project to learn and understand the challenges, but also to educate and to promote action.

The eyes of the entire maritime science community around the world were trained on the small Mediterranean nation when H.S.H. Prince Albert II of Monaco saw off his country’s floating scientific platform M/V Yersin under the command of Captain Jean Dumarais. On board, an international team of men and women researchers, equipped with a long to-do list, tasked to carry out diverse scientific explorations in the fields of marine biology, molecular biology, biodiversity, mega fauna, and related disciplines. Along with that, the Monaco Explorations Campaign also serves to raise public and leaders awareness regarding the research findings as well as the many threats facing the world’s seas today. 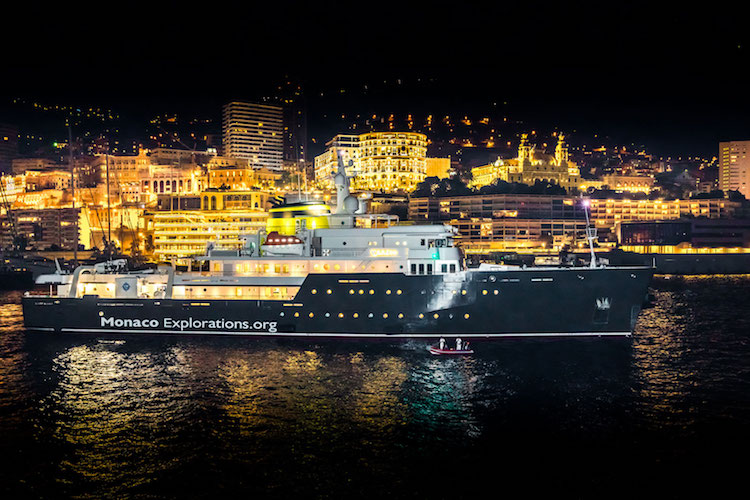 “The scientific programmes selected for this campaign will have several objectives, notably a better knowledge of the oceans and the threats they face, in order to contribute to the search for local and international solutions, both from practical and political points of view,” Prince Albert II, a fierce environmentalist, explains. “We are witnessing a moment that will remain in our memories, in those of the Principality of Monaco, and in those of all the defenders of the seas.”

Initiated by H.S.H. Prince Albert II of Monaco with full support of the Princely Government, and in partnership with Fondation Prince Albert II, Institut Océanographique de Monaco, Yacht Club de Monaco, Centre Scientifique de Monaco, and private partners such as Monaco-Telecom, SSI-MonacoSat and Inmarsat, this project is the culmination of ten years of planning and preparing the privately owned M/V Yersin. A unique vessel indeed: equipped with six research laboratories, a Remotely Operated Vehicle (ROV), a complete diving station, and state-of-the-art communications technologies, the 251 foot, 2250-ton ship is ideally suited for scientific research and education, and designed and operated to minimize its impact on seas and marine ecosystems.

And first results are quick to come in.

After only three weeks, the Yersin reaches its first destination: Macaronesia – the region comprising the four major archipelagos in the North Eastern Atlantic off the European and African coast, namely the Azores, Madeira, the Canary Islands, and the Republic of Cabo Verde. 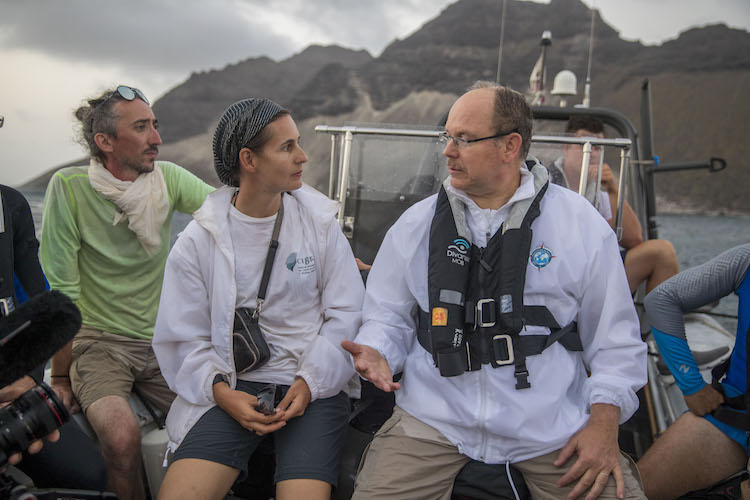 During Mission One – the planned stay of 48 days in the region between mid-August and early October – the scientific crew of the Yersin meets with numerous land-based researchers to conduct a total of 12 scientific operations, covering 3,150 nautical miles (5,800 km) between Madeira and Cabo Verde.

The tasks aboard and on land are multiple and varied: observing the interaction of sea birds and sea mammals who rarely meet; a visit of the uninhabited Selvagens (aka Savage) island group with the purpose to study ecosystems in a location without interaction between man and nature, but yet littered with plastic waste drifting ashore; a free dive to shoot 360° video and audio of mammal communication for the Darewin open source data programme; or research into the behaviour of rare lizards and geckos on the inhospitable desert island of Branco, belonging to the Cabo Verdian archipelago. Bottom landers are deployed to survey the seafloor, baited cameras are installed to lure and film water dwellers, and sharks get tagged…no shortage of activities here. Visiting groups of researchers all have their particular interests, and Monaco Explorations project leader Pierre Gilles directs the operations like a world class chef d’orchestre.

One of the central projects of Mission One takes place in Madeira and its neighbouring islands, involving the first ever inventory of the Mediterranean monk seals and the mapping of their habitat of Madeira’s northern coast and Las Desertas’ eastern coast. These sea mammals are one of the most threatened species in the world with only an estimated 500 animals left in the world, and to understand the conditions they are exposed helps to better protect them, so even a necropsy can shed light on the circumstances they lived in. Another special project, this one on Branco, is the search for the giant skink, a lizard that has not been seen for decades. And the team is lucky and actually finds five of them…

Well-known both for his profound knowledge of maritime sciences and his hands-on manner, Prince Albert II has planned on regularly rendezvousing with the team, and joins them for the first time on September 5 for almost three weeks. Packed to the gills, his schedule across Madeira and Cabo Verde includes conservation workshops, dives, visits to the Sea Turtle Foundation on Boa Vista island and the Ocean Science Centre of the German GEOMAR Helmholtz Center for Ocean Research, and meetings with GO and NGO representatives as well as high-ranking politicians from Madeira and Cabo Verde.

And true to his commitment to also utilize this project for educational purposes, the prince, accompanied by Roberto Calcagno, director of the Musée Océanographique, even finds the time to hold a Skype conference with 300 school kids back home in Monaco before dashing off to a meeting with the President of the Republic of Cabo Verde…and he does not come emptyhanded but with a stunning surprise, gifting the Head of State one of those five giant lizards that could be located on Branco.

Another milestone on the prince’s programme: the opening of an exhibit at the Main Museum of Funchal, honouring his seafaring forebear and namesake, widely acknowledged as the founder of modern oceanography. “This tradition [of research and protection of the oceans] goes back to my great-great-grandfather, Prince Albert I, Prince-Scholar who one hundred years ago established the Oceanographic Institute of Paris and the Oceanographic Museum of Monaco, and who, throughout his life, was a rigorous scientist, an impassioned populariser and an inventor of genius,” the Monegasque sovereign states in a tribute to his ancestor. 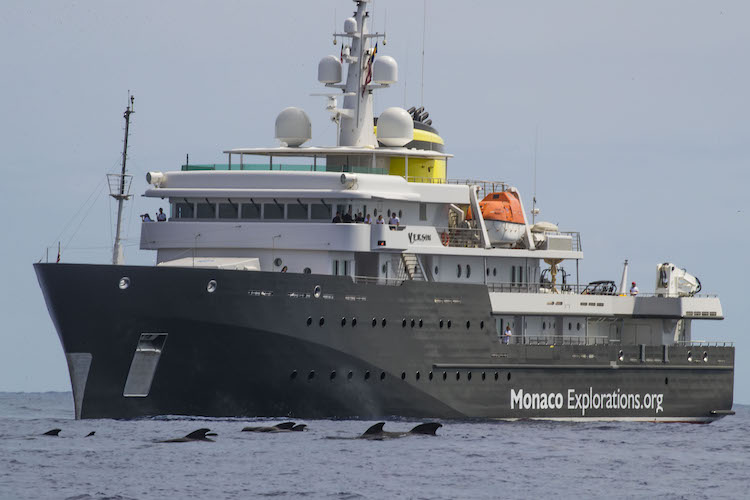 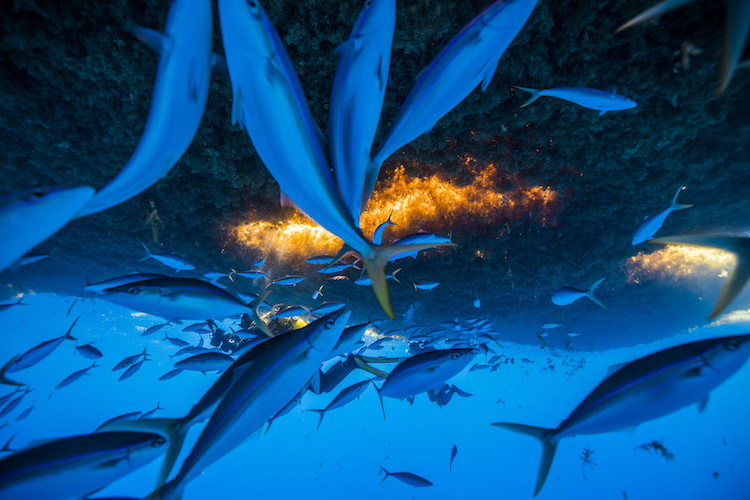 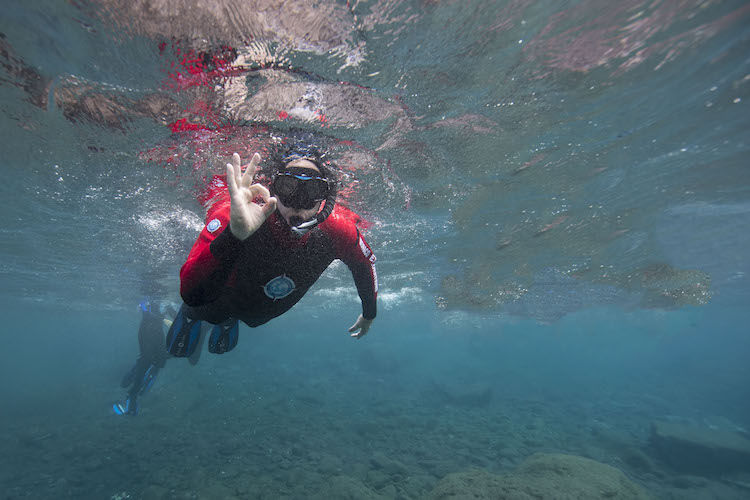 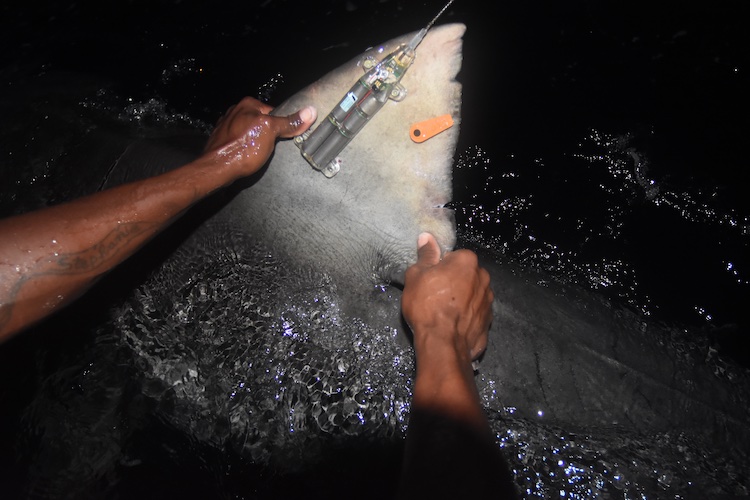 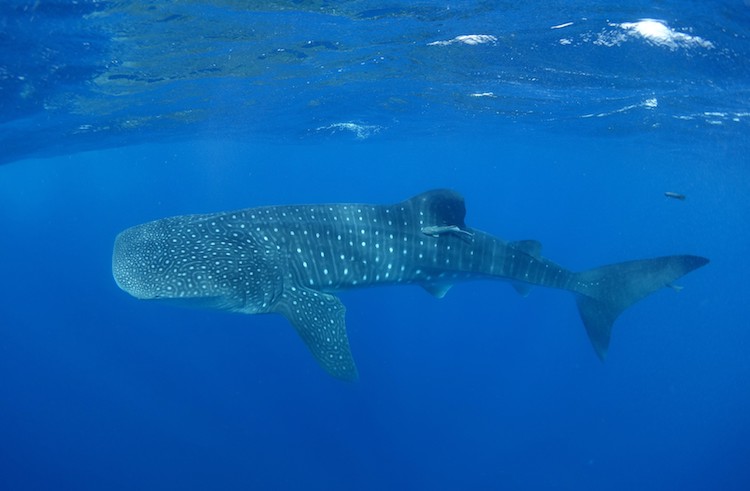 Having successfully concluded the Macaronesia chapter in early October, the M/V Yersin sets off for the Caribbean, and en route the team and visiting scientists busy themselves with identifying the processes leading to the proliferation of Sargassum, an invasive brown algae, which deprives coastal life of light and creates large amount of organic matter in putrefaction at shore, causing dramatic consequences on water, air quality, and health. On October 24, Monaco Explorations reaches Martinique, where the team catches up with Prince Albert II again a couple of days later. The Sovereign inaugurates the Prêcheur marine reserve and hosts a gathering in Fort de France to share the team’s findings on Sargassum. “Today we have enough perspective to know that marine reserves and protected areas are the best ways to regulate overfishing and protect the ecosystems. One benefit of creating these reserves is that they provide generations of fishermen the ability to continue their livelihood for years to come. Marine protected areas help to protect the marine environments and biodiversity by bringing man and the sea together responsibly.”

In this spirit, UNESCO and the Principality of Monaco on November 1 sign a strategic partnership agreement in favour of Marine World Heritage, aimed at strengthening the activities of the World Heritage Marine Programme. This announcement follows an initial cooperation earlier this year that led to the identification of potential new World Heritage marine sites in the Arctic region.

Considering it has only been a little over three months that M/V Yersin has left Port Hercule in Monaco, the breadth and depth of results and accomplishments is nothing short of astounding. All in all there will be 20 scheduled stops over the three year voyage. Whether you are a bona-fide science fan or an armchair adventurer – stay tuned for the next report as we accompany Monaco Explorations on its 20-stop and three-year voyage around the oceans of the world. Along the way you will also meet some of the team members, check out the technology that makes the Yersin a floating high performance science centre, and have a closer look around the places the team stops at. If you have questions you would like to ask the crew, let us know and we will be happy to relay them. You can also follow their news and blog on their website.

“The Explorations of Monaco are at the confluence of most of the themes which are dear to Me, and which in this respect resonates particularly in Me. It is an adventure that also echoes the most beautiful traditions of the Principality, and is addressed to all of Humanity.”