How a simple pair of trainers opens up a huge can of worms and leaves you contemplating the world of urban legend and myth…really!

We were sent this photograph (see below) recently from a reader who has enlisted our help to get to the bottom of a seemingly simple gesture…a pair of trainers thrown over the powerlines on rue Collet, on the way into Vieux Nice.

She says that they have been there for quite a while now – initially they did not bother her, but in passing this way each day, she has become more and more aware of their presence…to the point where she is now actually losing sleep in trying to figure out the relevance of this action.

We too were intrigued by this and decided to do our own research into the matter. 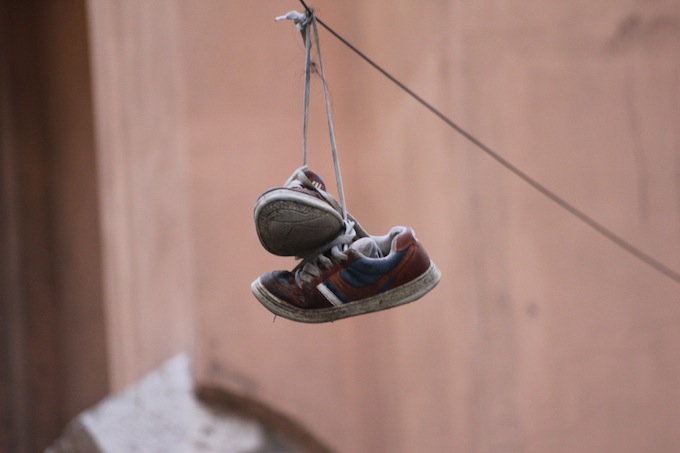 According to the world’s most reliable source for [any] information, Wikipedia, shoe-flinging or shoefiti is “… the practice of throwing shoes whose shoelaces have been tied together so that they hang from overhead wires such as power lines or telephone cables. This practice plays a widespread, though mysterious, role in adolescent folklore in the United States. Shoe flinging has also been reported in many other countries.”

Right, so what does it mean…why do people do it, we asked. There are a number of different reasons for this shoe tossing, including drug and crime related issues, commemorating weddings, passing exams, and so on and so forth. The possibilities are beginning to seem endless. We need to narrow it down–maybe this video will help us understand the phenomenon…

Ok, we’re none the wiser – can any of you guys out there give us a good reason for the tossing of the shoe, and put us out of our misery for once and for all. Thank you!

And if you do happen to notice any wayward pairs of trainers or shoes hanging around from an overhead wire near you, do post a picture on our Facebook page! This thing may be bigger than any of us actually realise…!