Having shared his time between Dublin and Nice, both cities mourn the loss of one of the greatest contemporary poets and writers.

He died where he loved to live, in Nice, on 10th December, 2016. The legacy of John Montague’s immense body of work remains behind…. work that has redefined much of literary culture of the later 20th century… . and work that was inspired by a lifetime of perpetually wandering between three countries: The United States where he had been born 87 years ago, his ancestral Ireland, and his chosen fatherland of France. He shared his passion for France with fellow Irish writer Samuel Beckett who greatly influenced him. Nothing though pointed to France in the beginning.

Born in 1929 in Brooklyn, New York to Irish-Catholic immigrant parents, he was sent back to Ulster at four years of age, to live with his aunts in Tyrone. In 1946 he attended University College Dublin and began publishing his first poems in local newspapers. When a Yale Fulbright scholarship took him back to the States in the early 1950s, he made the acquaintance of the likes of Saul Bellow who noticed his talent and encouraged him to keep publishing. A few years later Montague returned to Dublin, but then quickly moved to Paris where he worked as a correspondent for the Irish Times and became close friends with playwright Samuel Beckett. He eventually returned to Ireland, settling in Cork, but France had him in her grips by then. It was to be the beginning of a lifelong triangular journey between Ireland, France, and America, and two homes in the European cities.

Montague wrote such monumental poems as Forms of Exile (1958), Poisoned Lands (1961), A Chosen Light (1967), Tides (1970), and The Rough Field (1972). He also published three collections of stories: Death of a Chieftain (1964), An Occasion of Sin (1992), and A Love Present (1997). Countless prestigious awards honoured his literary creations, among them the Marten Toonder Award, a Guggenheim fellowship, the Ireland Funds Literary Award, and the first Hughes Award. And he shared his experience whenever he could, teaching at University of California, Berkeley, University College Cork, the Sorbonne, and other institutions, and served as distinguished Writer-in-Residence at the New York State Writers Institute. He was made Ireland’s first Professor of Poetry in 1998. And just last month, the poet was presented with the Bob Hughes Lifetime Achievement Award at the Bord Gáis Energy Irish Book Awards. He also translated the work of several French poets. 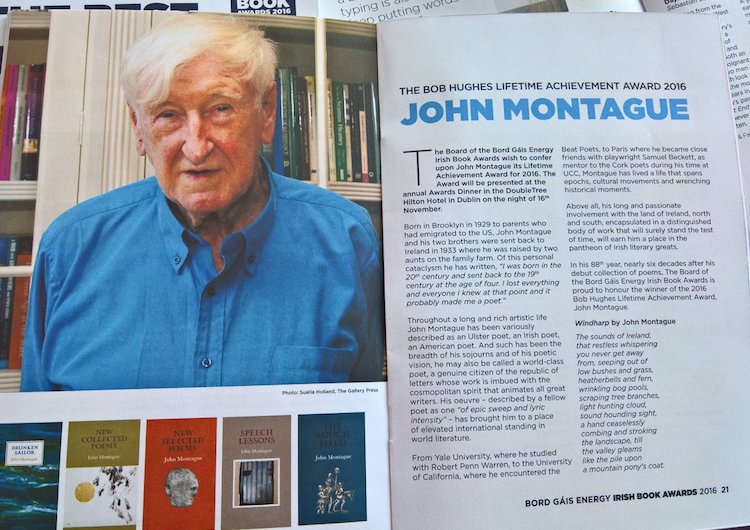 “Acutely aware of the epicurean, mutually influential and cultural ties between Nice and Dublin, John Montague had chosen Nice as his second fatherland and the Cave Romagnan, the famous jazzbar and place of encounters and exchange, as his second home. Deeply attached to the region, he contributed to numerous publications by the Maeght Foundation in St. Paul de Vence,” said Christian Estrosi, President of the Paca region and Philippe Pradal, Mayor of Nice in a joint statement. “Those who are fortunate enough to know his work, appreciate his expressive poems but also his storytelling from memory.”

Montague’s poems often find their shape in extended sequences that engage themes of travel and exile, national identity, and personal loss, poignantly expressed in the final line of The Rough Field: “With all my circling a failure to return”. More than any poet of his generation he opened up channels between the Irish and English tradition, between regional and cosmopolitan allegiances, and between Ulster and Irish perspectives, so says the Times Literary Supplement.

But with all his circling, he did not fail to return this last time…. he had come home to Nice to spend his final days where he was happiest. A great artist and much beloved man has left us. Ar dheis Dé go raibh a anam (May he rest in peace).

There are Days
by John Montague

There are days when
one should be able
to pluck off one’s head
like a dented or worn
helmet, straight from
the nape and collarbone
(those crackling branches!)

and place it firmly down
in the bed of a flowing stream.

And then set it back again
on the base of the shoulders:
well tamped down, of course,
the laved skin and mouth,
the marble of the eyes
rinsed and ready
for love; for prophecy?