Lovers of Italian and English films rejoice! The 2015 CineTour festival is about to kick off, and it has quite a few gems in store.

Throughout the year, the tiny town of Dolceacqua, just yonder the French-Italian border, is not exactly the epicenter of the cultural world. But that changes every year in summer when the CineTour festival is underway. Five weeks of Italian and English films (and a couple of French ones, too), served al fresco on the beach, at the 12th century Castle, and in the main square, lure cinephiles even from far-flung places.

First launched in 2011 courtesy of the venerable Cristallo Cinema and its association, Oltre il Cristallo, the bilingual film festival has quickly become a beloved fixture which is getting increasingly more traction for its high-caliber artistic content. Specialized in non-mainstream material, and unearthing quite a few rare gems, this year’s program is as much a reflection of CineTour’s philosophy as of its stellar rise to popularity. Admittedly, the vast majority of movies is in Italian and only two are in English (and all are subtitled in the opposite language), but even if you master the language of Shakespeare better than that of Dante, the entire lineup is worthy of a big international festival.

Of those two movies shown in the original English version this year, you have a choice (or why not watch them both?) between Montage of Heck, Brett Morgan’s intimate observation of Kurt Cobain’s life in all its gory glory, shown on July 22, and Midsummer Night’s Tango, a musical documentary of three musicians from Argentina traveling to Finland to search for the origins of tango music, which will be projected on August 7.

Montage of Heck is the rarely screened documentary about late cult musician Kurt Cobain, from his early days in Aberdeen, Washington to his success and downfall with the grunge band Nirvana. Considered one of the most innovative and personal documentaries of all times, it is the only fully authorised portrait of the famed music icon. Academy Award nominated filmmaker Brett Morgen blends Cobain’s personal archive of art, music, never seen before videos and sound tracks, animation and revelatory interviews from his family and closest friends.

In Midsummer Night’s Tango, Finnish director Aki Kaurismäki claims that the Finns invented Tango. Are you kidding? What is this, some kind of joke? Follow a couple of Latin American musicians on their humorous, music and dance-filled exploration of the rich tradition of tango as it exists in this unlikely Nordic country, and an illuminating, joyful journey into the global village of shared culture.

The Italian-language films shown during the 5 week festival from July 15 through August 19 run the gamut from newly released ones that made a splash such as Edoardo Leo’s hilarious contemporary comedy Noi E La Giulia, to reflective movies about what has become sad day-to-day reality like E Ora Dove Andiamo?, the story of a group of Muslim and Christian women in the war-torn Middle-East, trying to halt the wave of violence. All in all, a carefully selected program truly appealing to all tastes, as long as you’re not on the lookout for the next Hollywood blockbuster.

This amazing little festival is organized by a small group of passionate volunteers eager to keep alive the legacy of Father Angelo Nanni, aka Don Nanni. It was this art-loving priest who first introduced a semblance of culture to his community of Dolceacqua half a century ago, not only as a fine sculptor himself whose work can still be seen on display at the local Sant’Antonio Abate church, but also as the creator of the Cristallo, the communal cultural space which would serve as a platform both for film and for theater. In the five decades since, the Cristallo has become the hot insider tip for those who seek something a bit different from the more commercial cultural offer on tap in nearby San Remo. Even outside festival time, the theater offers a monthly film projection in English, much to the delight of the large local expat community. 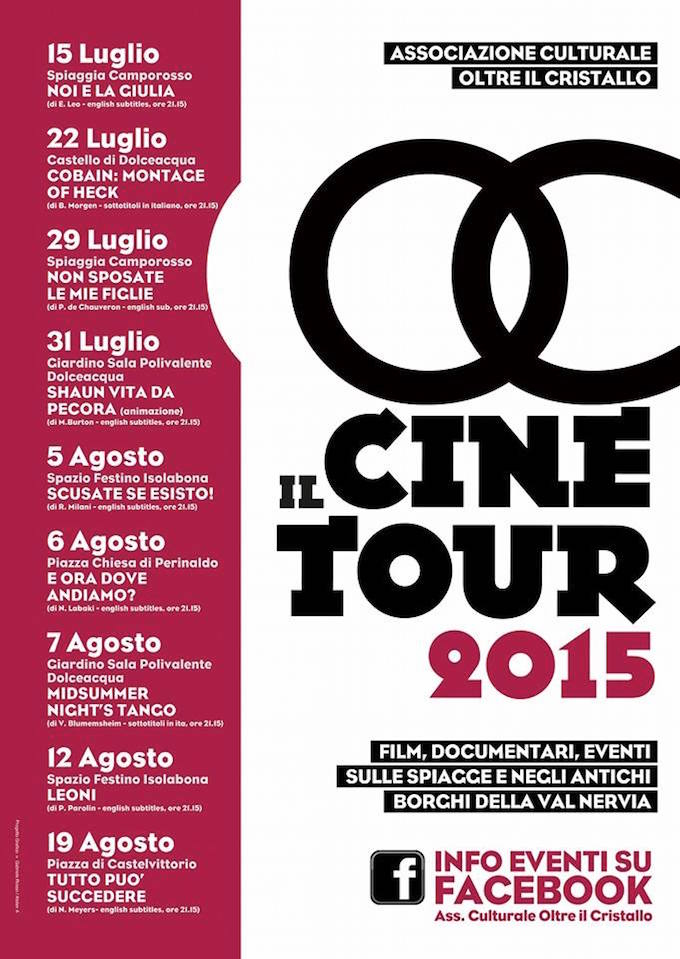 Hosted by the Cristallo Cinema, the CineTour festival takes place at various venues across town, notably the Camporosso Beach and the 12th century castle, overlooking the dramatic scenery of the Ligurian Alps. The organizers have big and ambitious plans. They are hoping to invite international celebrities like Nice-born film and movie star Marc Duret whose Italian roots and American background would make him the perfect Godfather of the CineTour festival. There are also talks about a cross-border exchange with France.

So whether you’re looking to get your culture fix or you just want to escape the annual summer tourist invasion on the Côte d’Azur – this delightful festival a hop, skip, and jump across the border is the place to be. Just don’t forget to bring your beach towel and your popcorn!

For last-minute info, connect with the Oltre Il Cristallo Association on its Facebook page.