The worldwide support and solidarity after these past days of horror helps France to honor the victims… and the survivors. We ARE Charlie.

France has had a brutal week but the international community has rallied admirably around the stricken country. Now it’s time for citizens and residents to move forward and begin the healing process, and we are doing so by showing our defiance by coming together. In places like Nice, Saturday’s commemoration march has turned into a beautiful show of allegiance to shared values and ideas across borders, nationalities, and languages.

Led by Mayor Christian Estrosi and city officials, more than 30,000 people lined the one mile stretch from the port to the Promenade Albert Ier, as they marched under an uncharacteristically grey winter sky in honour of the 12 victims of the gruesome terror attack on Charlie Hebdo, the cold-blooded murder of 27 year old rookie policewoman Clarissa Jean-Philippe, and the four hostages who were killed in the kosher supermarket. Punctuated by chanting, “Je suis Charlie – Nous sommes Charlie”, the mood was peaceful and reflective, but at the same time defiantly optimistic that nothing, no matter what, could bring France and its way of life to its knees. Everyone tried to bring something to the table, a personal way of remembering the victims. Many expressed individual opinions on pickets, others sang, all shared a sense of grief and brotherliness. 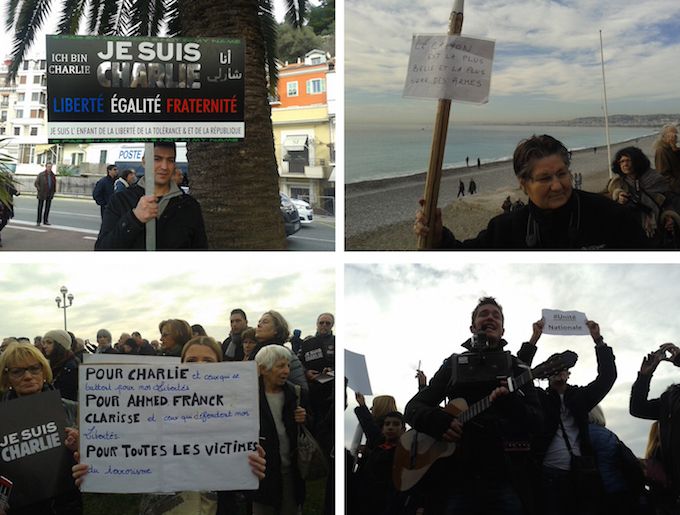 Spotted in the crowd: a group of Nice Matin staffers showing support for their fallen peers….. expats living in Nice…. visitors and tourists from around the world like the Cambodian couple who joined to express their solidarity in remembrance of its own calvary under the Khmer Rouge regime. Representatives of all sorts of alternative lifestyles. Children, elderly people, people in wheelchairs. 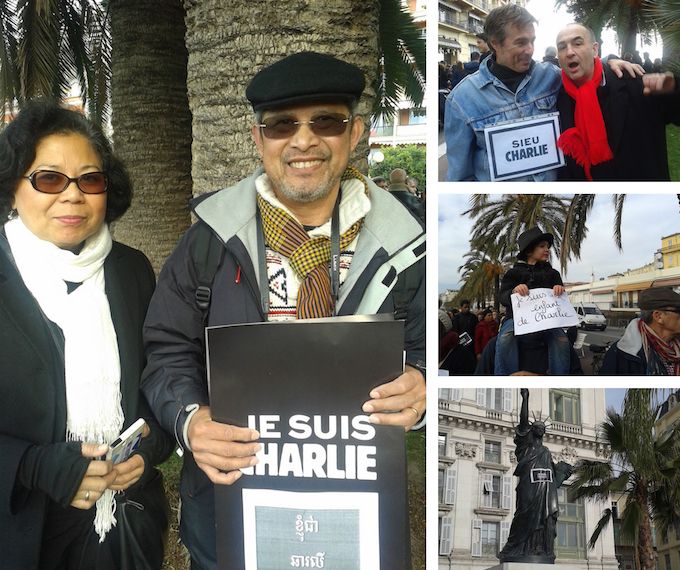 We had the opportunity to ask a policeman what it means to them living with the knowledge that they are risking their lives every single day they go to work. “It’s true,” the officer told us on condition of anonymity, “we are keenly aware of that. We get physically and verbally attacked all the time. But we have pledged to loyally serve the French Republic, and it is a choice we do not regret. This country represents a long and proud history but also all the values that distinguish our Western lifestyle today: democracy, liberty, and freedom of expression, and we stand for that and defend that, even at the risk of our own life and health.” 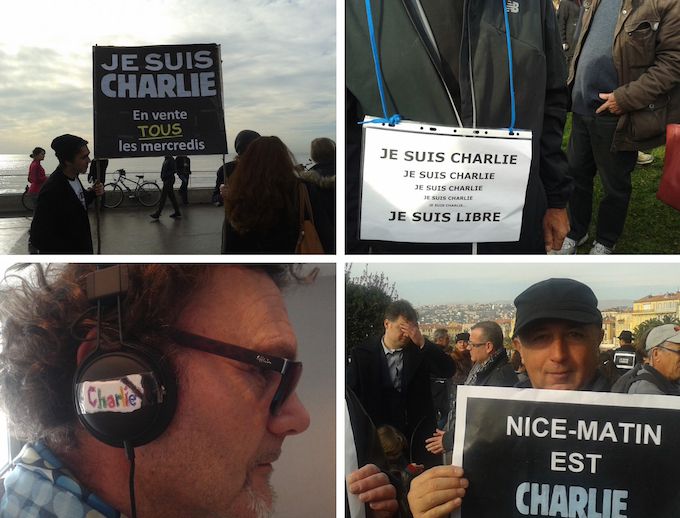 The United States and France share close and friendly ties, and this is why today we allow ourselves to borrow the American motto, “E pluribus unum” (Out of many, one). Charlie Hebdo was attacked and it was an attack on all of us but we have not been brought down…. we have risen – bigger, stronger, and more unified than ever before, with the help of the international community. And the march in Nice has proven just that.