After a fantastic first run, the Lucernaire now presents an extended version of Cesare Capitani’s play about the Italian scientist.

In a city like Paris, where there is no shortage of great plays all year round, to have an initial six-week run extended by another two months and moved to a hall that holds twice the number of spectators says a lot about the quality of a play. This is what just happened to Cesare Capitani and his tremendously successful play L’Autre Galilée, which he wrote and stars in. After being the talk of the town last year in October and November, this powerful, intelligent, poetic, and funny portrayal of the Renaissance scientist from Pisa has been reprogrammed at the venerable Théâtre Lucernaire from January 13 to March 12, and in addition to the French original is now also presented in Italian.

The one-man biopic, largely based on Galileo’s authentic letters, shines the spotlight on a different side of the genius scientist and astronomer. Here we meet the younger, optimistic, idealistic man, one with a strong philosophical bend, and even quite a humourous, mischievous side. We examine a theme that runs through his life, which was as pertinent then as it is now – freedom of thought and speech. And we discover what a thoroughly modern human rights fighter he was, centuries ahead of his time, in an era where such forward thinking was quite a courageous act of resistance.

With all that is going on in the world at large, it is small wonder that this play touched minds and hearts when it was first performed in late Fall 2015. It couldn’t have been timelier or more on the point, while Cesare’s translation and interpretation lends it lightness and a subtle sense of humor. Fans and critics were under the Italian actor’s charm in equal measure. “…A powerful and troubling testimony in the face of our sad geopolitical reality…. Cesare Capitani magnificently incarnates the genius beyond human flaws, inviting us to a wonderful theatrical experience…”, according to Le Coup de Théâtre. The Regarts magazine critic draws a comparison to the style of one of the greatest French actors, Francis Huster, while her colleague from Froggysdelight raves about the “…distinguished actor, passionate and subtle, whose charismatic presence takes the public on an encounter with a man who resists.” And director Thierry Surace was lauded “for the symbiotic way he accompanies the actor’s powerful play in a delicate process that evokes, incarnates, and expands”.

High praise indeed, and well-deserved, too. But instead of resting on his laurels, Cesare reworked the original play, extending the original 53 minute version by 10 minutes, and now also presents an Italian translation every Tuesday, “L’Altro Galileo”. While Cesare had previously already done copious research on his title hero, his recent visit to Pisa and Galileo’s Alma Mater was a source of inspiration to find out even more. Re-reading Galileo’s original letters and seeing some of his inventions, the actor plunged into the universe of the “Father of Physics” who had revolutionized science, and unearthed some lesser-known facts. Beyond more famous inventions like the geometric and military compass, Galileo had also invented early versions of a thermometer and even a computer. He also devised a money exchange system between the currencies of the Republic of Venice and Florence. But not only was he brilliant, he was also shrewd…. he would, for instance, offer his inventions and objects as presents to the political and clerical powers of his day – but if they wanted the manual to go with it, they would have to shell out a good chunk of change. And, quite unexpectedly, he also had a fine singing voice, so much so that he was invited to perform at soirées. 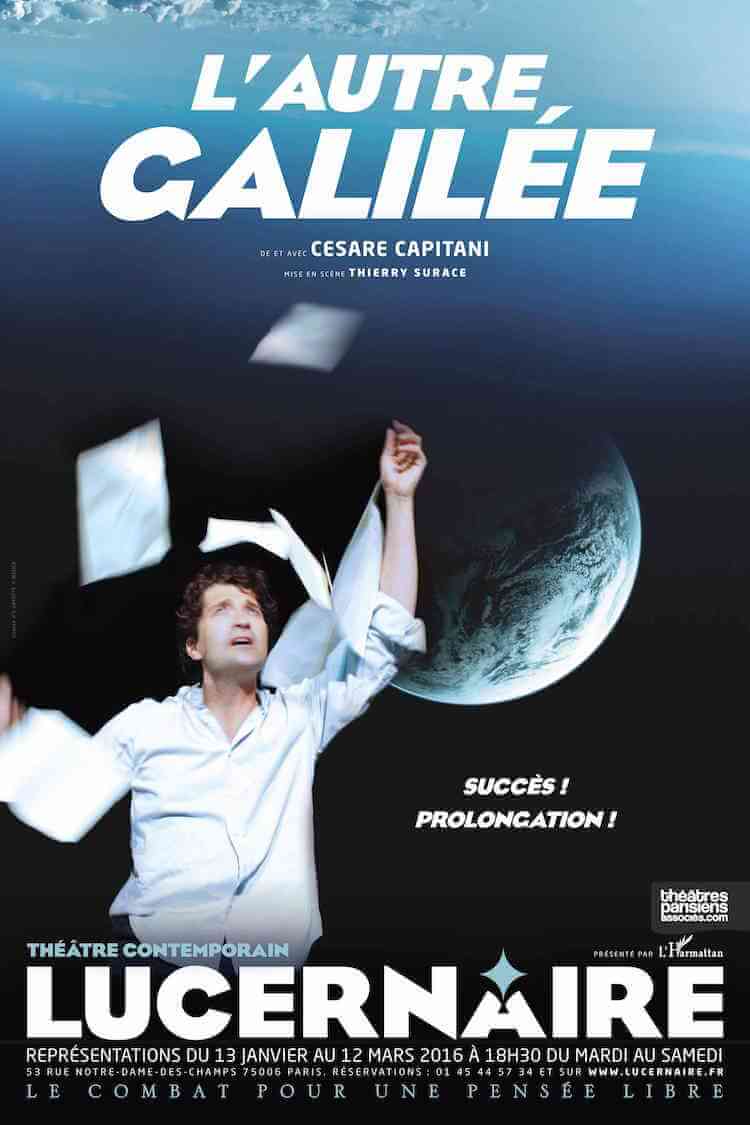 Most of all though, Cesare’s research reinforced how avant-garde the Renaissance scientist from Pisa really was. Throughout his life he championed values that we hold to be progressive accomplishments of modern day life. He kept advocating for human rights, starting with equality of men and women by circling back to the anatomical truth that both genders possess the exact same number of ribs. And not only a steadfast defender of freedom of thought and speech – as the play’s tagline already suggests – he also ardently supported the right of education for all, regardless of status or gender.

“Like most people, I had originally had the image of Galileo as a grumpy old man. But the more I studied him, the more I realized what a pleasant person he actually really was. My goal was to distill some of this into the revised play, to make Galileo even more likeable, and I hope the audience feels the same way about him,” Cesare tells us with unbridled enthusiasm and passion. A curious and intellectual mind himself, his own values mirror those of his protagonist and fellow countryman. It came therefore as no surprise that the actor took the courageous decision, as one of few in town, to go on stage the night after the November 13 terror attacks, to underline that freedom of thought and speech can be targeted but not annihilated.

A graduate from Giorgio Strehler’s prestigious Piccolo Teatro acting academy in Milan, the multitalented Italian actor, director, writer, and singer, is one of the most accomplished artists in France, his country of adoption for the past 17 years. For L’Autre Galilée he also translated the original letters into contemporary Italian and French. Prior to L’Autre Galilée he performed Moi Caravage, a portrayal of the troubled Renaissance painter of light and shadow, for five years to enthusiastic international audiences and critics. 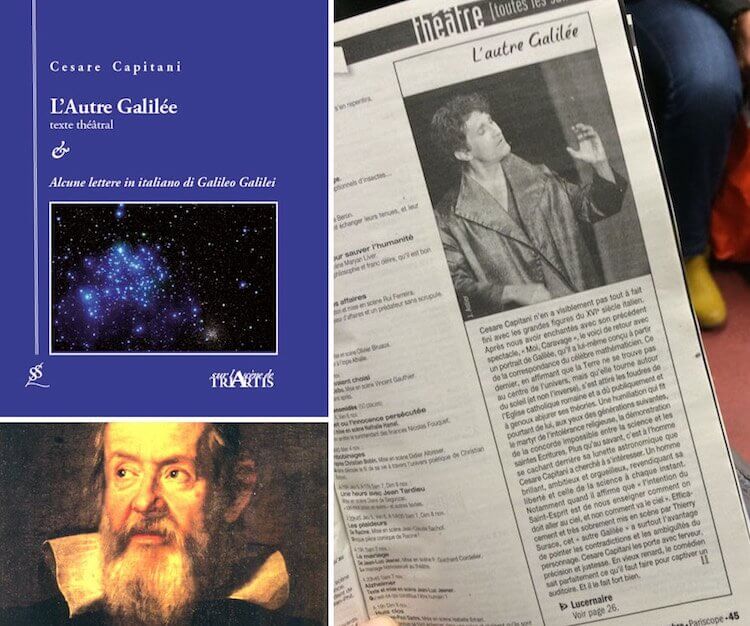 L’Autre Galilée – a Must See, and even a Must See Again play…. in French (Wednesdays through Saturdays) or in Italian (on Tuesdays) at 18.30 h at the Théâtre Lucernaire, 75006 Paris.

Special discounted admission fees apply for opening night on Wednesday, January 13, so make sure you secure yours while tickets last! An accompanying text book by Cesare Capitani, titled “L’Autre Galilée”, containing the French play, Italian letters, and author’s commentary can be ordered through Triartis Editions. 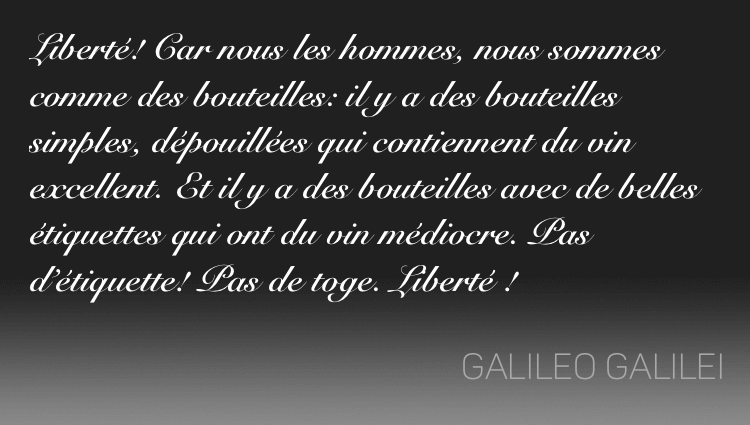