Every year in October, Paris turns into the world’s biggest modern art gallery, and Nice is duly and worthily represented.

The eyes of the entire art world are once again turning to Paris when the City of Lights hosts the 42nd Foire Internationale de l’Art Contemporain (FIAC) from October 22 through 26, presenting over 170 participating galleries and exhibitors from 23 countries at in- and outdoor venues all over town, and the French Riviera is sending some of its finest plastic artists to feature their works. They find their artistic home away from home at the prestigious Salon Business Art and its partnering exhibit Art Freedom, right at the epicenter of it all, the exclusive Espace Pierre Cardin on the Champs-Elysées, under the high patronage of Pierre Cardin.

Salon Business Art is on a declared mission to give plastic artists from different disciplines, ranging from well-established names to promising newcomers, exposure to collectors and art lovers, aiming at conciliating art, enterprise and humanitarian action. Unlike art galleries, it doesn’t impose creative limitations…. painters, sculptors, photographers, designers, street artists, or digital artists are all equally welcome in this modern art salon. “Our presence at Espace Pierre Cardin is symbolic in a way. Pierre Cardin is a brand but also the epic of an aesthete who during his long career embraced all artistic forms and other fields, from haute couture to design,” event coordinator Patrick Lachaud tells us.

In a field of over 170 participating exhibitors in one of the world’s most prestigious art fairs, it is hard to stand out, and yet, Salon Business Art has found a way… by simply staying true to its roots. “Business Art is the producer, and Art Freedom is the concept behind it, if you will. We are independent exhibitors with a philosophy of freedom. Artists can express themselves in any way and through any medium they like. They have freedom – Art Freedom. We do, however, make it a point to specifically support emerging talent, in fact we invited several of them as our guests,” Patrick Lachaud explains. And president Mélissa Biron adds, “We believe that art has to express itself freely in every area of life – political, economic, social and cultural”. 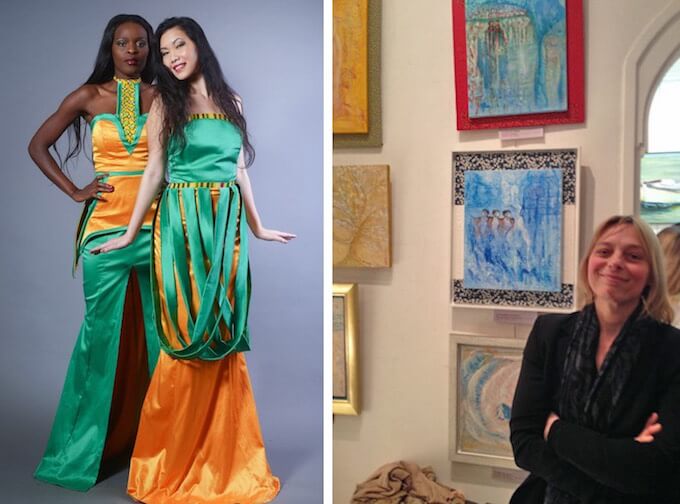 And as if to underline the liberal approach, Art Freedom has put its eighth edition of the exhibit under the motto Diversity and Solidarity. Drawing well-established names like painter Alain Caprice, fashion and fabric designer Sadio Bee, sculptor and muralist Stevens Dossou-Yovo, and painter Satoko (pictured above), the show is a melting pot of international artists who together open up a window to the world for thousands of visitors: New York, London, Brussels, Rio, Lomé, Bogota, Miami, Berlin, Barcelona, Rome, Paris…

And Nice… represented by three of the most accomplished local artists: Michel Anthony, Paulin Nikolli, and Fr. Yves-Marie Lequin. 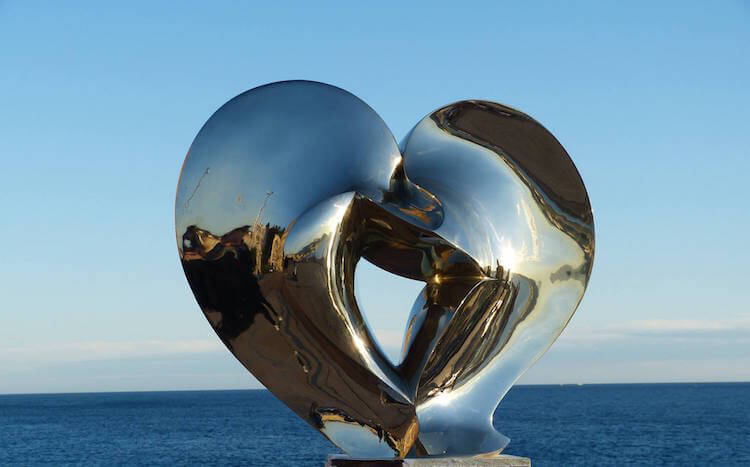 Michel Anthony, sculptor and painter of international renown, is one of the busiest and most-sought-after artists in town. Just back from a major art show in his native Malaysia, he currently has an installation at the Jardin Exotique in Monaco, and is now off to Paris to feature six of his works at the Art Freedom show, including his white bronze master piece L’Amour Flamboyant (pictured above). His signature style, uniquely elegant and understated, typically focuses on the theme of tolerance, peace and inclusion. He entered his first European competition in 2005 with a bang, winning first prize for the first sculpture he ever created, and hasn’t stopped accumulating prestigious distinctions and awards since…. even UNESCO came knocking on the door of his atelier in Vieux Nice to commission work.

Almost a neighbour of Michel’s in the Old Town, Paulin Nikolli’s work packs a lot of punch, oozing with raw energy. The journey to international acclaim was not an easy one for this Albania-born painter who is as colourful and irreverent as his creations, but he never lost faith in his dream to paint, and art is his way to process and express the difficulties he encountered en route. Starting out as a street artist, even the Ville de Nice eventually noticed his talent and has since occasionally exhibited them around town. But Paulin is not a believer in commercializing art, or being at the mercy of sponsors, and remains the great individualist and idealist he has always been, simply working to live out his calling to the arts.

And last but not least, Father Yves-Marie Lequin. A Dominican Friar and bursar of the chaplaincy to the artists, he is also a well-known, prolific painter whose work is frequently exhibited at a Parisian art gallery. After spending 18 years of his young adulthood in Togo and the Ivory Coast and studies of theology and psychology, he returned to France in the late 1990s where he took up painting. After settling in Nice in 2004, he came to understand that this is “a town at the crossroads, a refuge for people, and many of them are artists.” This realization inspired his expressive style, mostly abstract with vivid colors intended to provoke reflection, always with a willed imperfection. 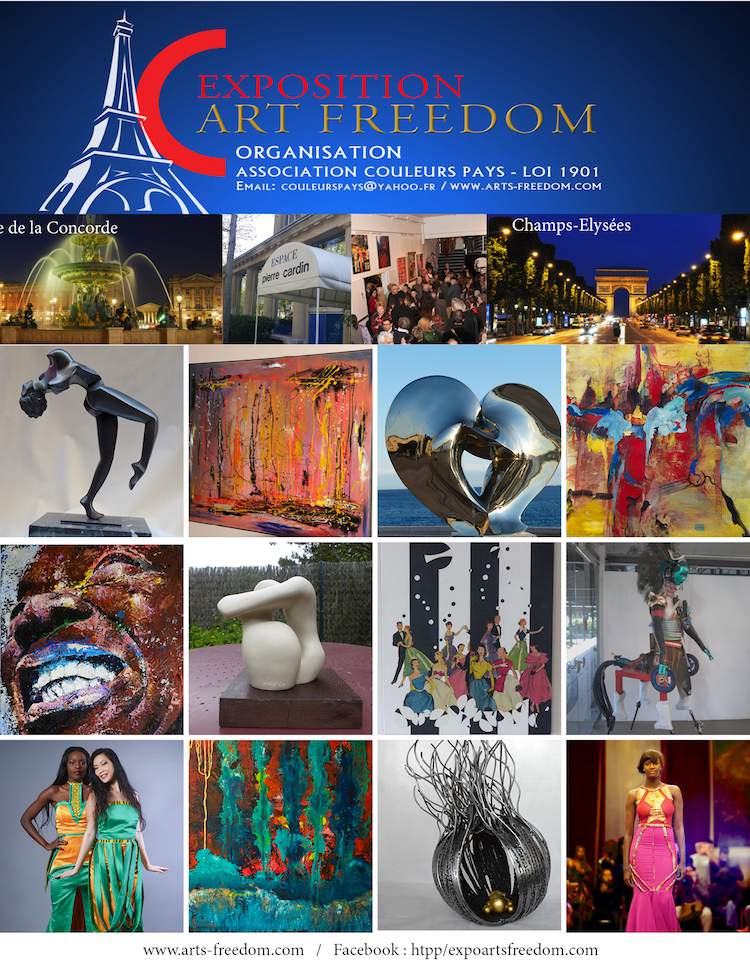 All three of them, with individual biographies that include long periods of life outside France, can relate first hand to this year’s theme of diversity and solidarity. The Diversity aspect is embodied by the presence of over 50 artists from every continent, and Solidarity finds its expression through the salon’s wide exposure to a highly knowledgeable audience from all over the world which includes art lovers, collectors, and corporate and institutional art buyers, offering the artists a rare chance to break through internationally and to sell their pieces to well-heeled art lovers and investors. In a generally sluggish economy, art remains a solid and even growing market… to the tune of billions of euros, and businesses use global expositions like to go investment-shopping at FIAC, while amateurs are on the hunt for the next Picasso, Matisse, or Braque.

Two of the highlights of the four day exhibit are the vernissage on Friday, October 23, at 6 pm, and the award ceremony on Saturday, October 24, at 8 pm. “Rather than prizes and ranking, we award four trophies, all of which have equal value”, Patrick explains the democratic approach.

After seven successful years, the Art Freedom concept is so well-respected in Paris that major corporate sponsors and top public and cultural representatives, including the Mayor of Paris, the Ministry of Overseas France, and several high-profile media partners, have put their financial and moral support behind it. And one media in particular has its eyes set on the success of the exhibit: La Gazette des Arts, one of the top international, bilingual print publications in the arts segment, whose director and editor-in-chief Georges Lévy is also the founder of Business Art.

In a world dictated by commercial interests, an exhibit like Art Freedom, firmly focusing on the true spirit of art – to feature, nurture, and help talent, and to celebrate individual heritage and expression of freedom – is a fresh breath of air and a welcome reminder that beauty, generosity, and solidarity still exist if you only know where to look. In fact, it’s easy to find: just come by the Business Art stand at Espace Pierre Cardin, 1-3 avenue Gabriel, 75008 Paris from October 23 to 26.