Nice and its artists… a longstanding love story that the city is very proud of. But when it comes to “street artists” – those who put up their easel along the Promenade des Anglais because they love painting the sweeping vistas, or those who make music on a highly professional level – well, the relationship is best characterized as “it’s complicated”. Regardless of talent and popularity, these local artists are a thorn in the side of the city fathers and face frequent confrontation with the police. Many a pricey “PV” (ticket) has been issued against them, citing public nuisance.

While many painters in Nice work from their own atelier, others prefer to work outside to capture the special light over the Baie des Anges or because they enjoy interacting with passersby. And some others yet simply cannot afford their own work space, given the prohibitive rents in Nice. 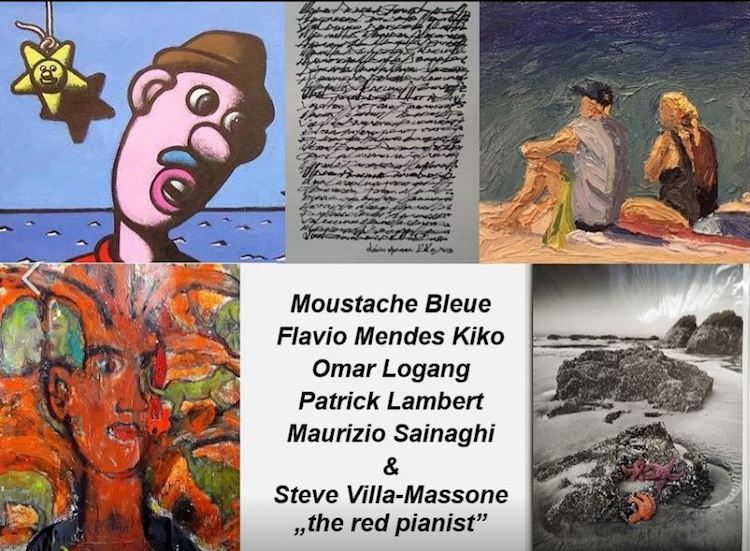 Aniko Papista, owner-manager of Gravis Art Gallery in Old Town Nice, has now invited five of the best local street artists to exhibit their work at her space. From December 13 through 15, Moustache Bleue, Flavio Mendes Kiko, Omar Logang, Patrick Lambert, and Maurizio Sainaghi will be featured in a special show, making their work known to a wider audience.

Moustache Bleue, the eccentric cartoonist, is instantly recognized by his trademark naïve style. He characterizes himself as the guy who “…paints a lot, and dreams of weird fish, houses that fly away somewhere, the laughing sun, and smiling seagulls.”

Omar Logang, a longtime Nice resident, might well be considered primo inter pares among this illustrious panel of street artists, and likely the one who most frequently gets tapped on the shoulder by local police. He hails from South Sudan and has been dubbed the “painter of light” for his unique way of capturing the early morning sun. His work has been exhibited internationally. 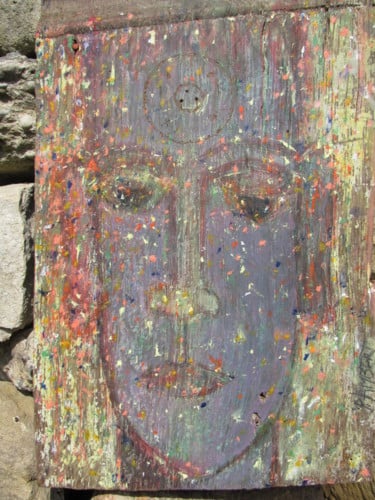 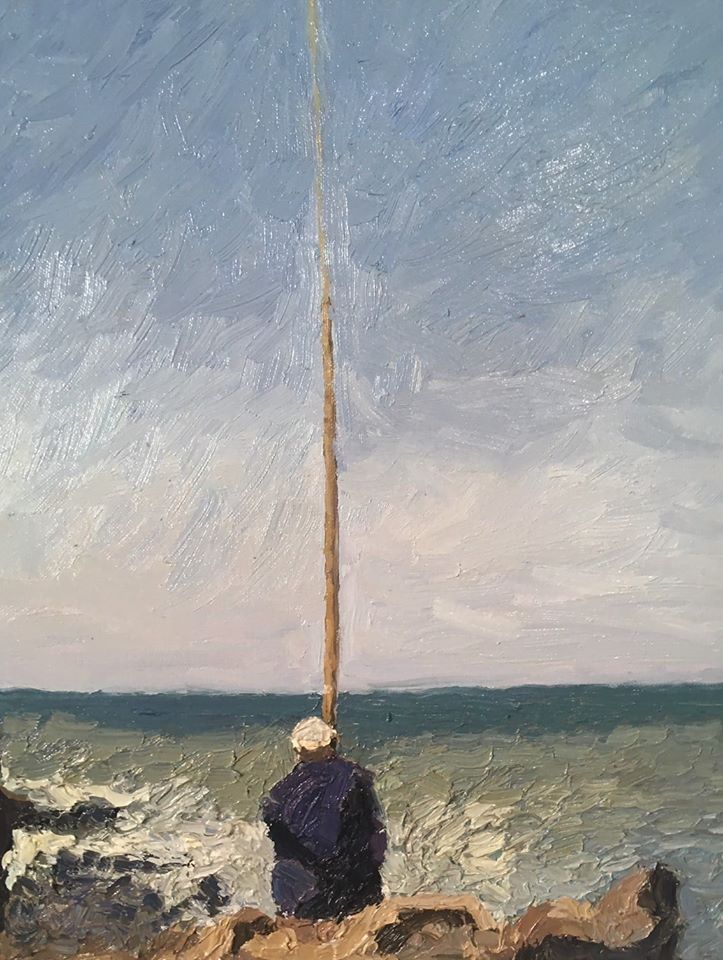 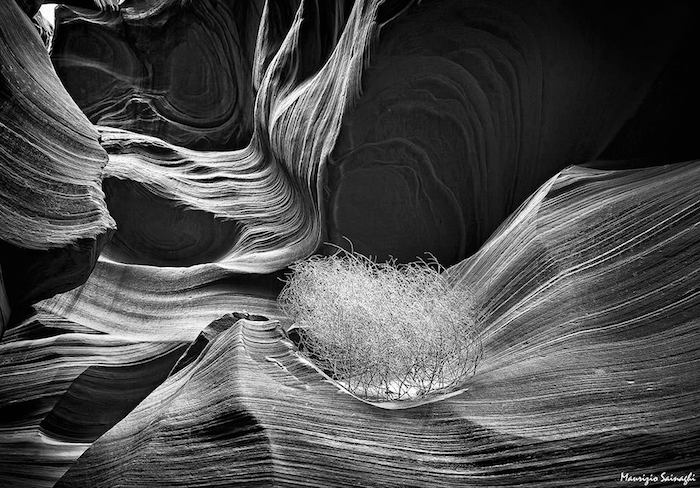 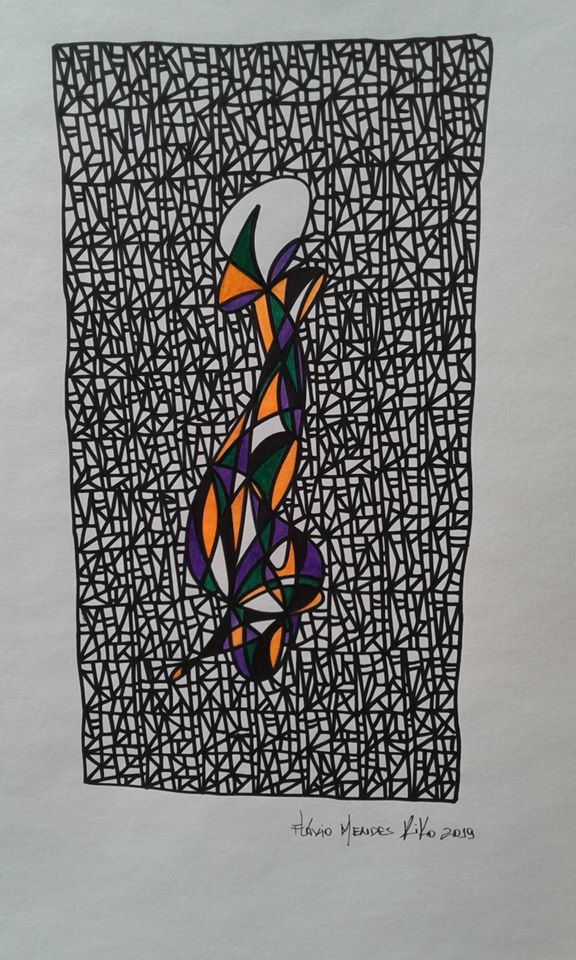 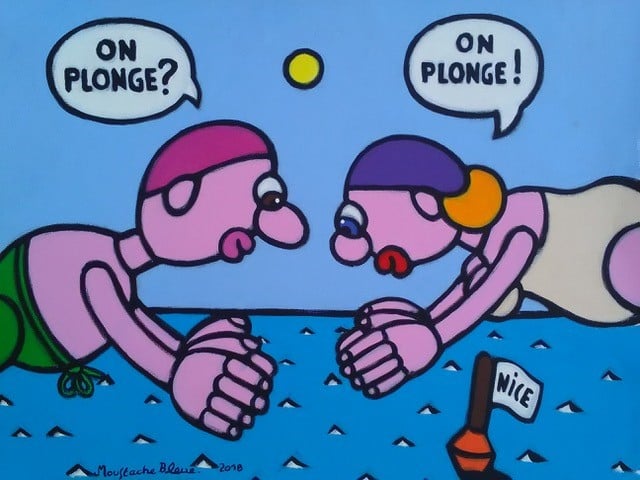 Patrick Lambert is a local painter and sculptor with an instinct for emotions and a talent for expressing them through his work, often using primary matter like wood to do so.

Italian-born photographer Maurizio Sainaghi has developed a keen eye for texture, often highlighted by his black & white technique. His particular love belongs to the natural wonders of the American South West where he lived for some time.

In fact, the vernissage on December 12 is a “5 +1” event when Nice’s much-beloved Red Piano man Steve Villa-Massone performs at the vernissage. He, too, has often felt the breath of municipal persecution in his neck. Steve is not a painter so a gallery is not his natural habitat but he still belongs there – he is the most visible, most popular, and likely the best street artist Nice has to offer. He and his famous red piano have made it to a “Best Of” status of Niçois attractions. A concert-quality composer and pianist, Steve is famous well beyond the Hexagon and constantly invited to perform at public and private functions (like the recent 2019 edition of the C’est Pas Classique festival). But his vision in life is to share his musical talent democratically, in the street, for all to enjoy.

Giving non-mainstream artists a place to exhibit has always been part of Aniko’s vision ever since she first opened her gallery two years ago. Arriving from Budapest, Hungary, in 2017, she had just left her old life as the director of a four star hotel behind her and embraced a new venture at a time when many other galleries were faltering. And she has been doing spectacularly well. The simple secret to her success may be found in her philosophy of “what I like and who I like… I just follow my heart”.

But passion alone is not enough, she also has a keen business sense, and a stroke of well-deserved luck when coming across the large space in rue Droite, adjacent to one of Nice’s major tourist attractions, Palais Lascaris, and almost directly across from Michel Anthony’s world-famous atelier. The space had been sitting empty for some time when Aniko visited it but she immediately fell in love with it, seeing its potential for an arts and events space. The weeks of hard work she then put in to make it presentable paid off handsomely. Today, the gallery has become a landmark, featuring back to back exhibitions in a space that is inviting, and breathes “open-mindedness”. Often Aniko displays the work of internationally renowned artists such as Sibilla Bjarnason and Jean-François Gaulthier but she will gladly dedicate wall space to local favorites like Mike Colquhoun, and even up-and-coming artists like 11 year old Canadian Lauren Graham, whose work recently guested at Gravis Art. 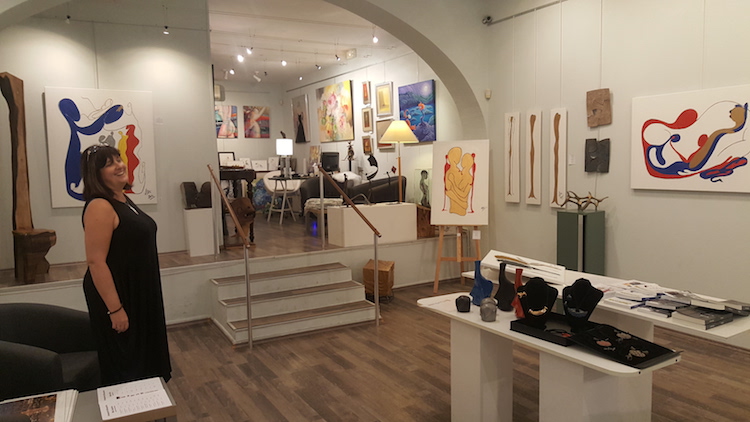 What attracted Hungary-born Aniko to Nice, we want to know? Was it part of her Italian heritage on her father’s side? Well, that, and also the fact that Nice has traditionally been a place that painters have flocked to. Her epiphany that this was the place for her came on a visit to Renoir’s gardens. She ventured, she gambled, and she won. In just two years she has made a major impact on the cultural and artistic scene in town, and Gravis Art Gallery has become a haven for artists… a rarity in today’s competitive and difficult economy. Apart from paintings, the gallery is also a treasure box filled with sculptures, jewelry, and small unique objects. This is a place where art and heart meet…. Step through the door and you’ll know why…

When I think about my childhood, I see our living room, thousands of books on the walls all around, and my father’s piano under the window. We used to spend hours playing under the piano with my brother, hiding from adults’ eyes.

As the years went by, I started to listen to my father’s catchy piano melodies. When he sat down to play, everything else ceased to exist for a while among the classical and jazz tunes. I haven’t even noticed how music became a part of my life, followed by books, and then sculptures and paintings.

My aim is to create a haven in Nice – among the walls of an old town gallery – full of paintings, sculptures and unique objects. Their creators are my friends too, whose personality and artworks are somehow important to me. These artists are all different with their various lives, experience, mood, and ways of expression.

Once in a while one of them spends a week here, while creating and talking with our visitors. Nevertheless, even on quiet days we are pleased to welcome our guests with a comfortable couch, relaxed music, and a cup of delicious coffee to relax with. Sooner or later everyone will find the artwork just created for them, and every piece of art will find the right person and home.

Open Wednesday through Sunday 11 am to 6 pm