As part of the Year of Russia in Monaco, a new exhibition is underway at the Grimaldi Forum featuring the works of Russian avant-garde artists.

Since the start of the year, a number of events have been organized to celebrate “The Year of Russia” in the Principality, and the strong links that exist between the two countries. One of the highlights is taking place this summer at the Grimaldi Forum with the exhibition ‘De Chagall à Malévitch, la revolution des avant-gardes’ (From Chagall to Malevich, the revolution of the avant-garde).

Running until the 6th of September, this exhibition brings together 150 artworks (some of which have never previously left Russia), from artists who made up avant-garde art scene in Russia for a quarter of a century from 1905 to 1930, and shook up centuries of convention and academism. 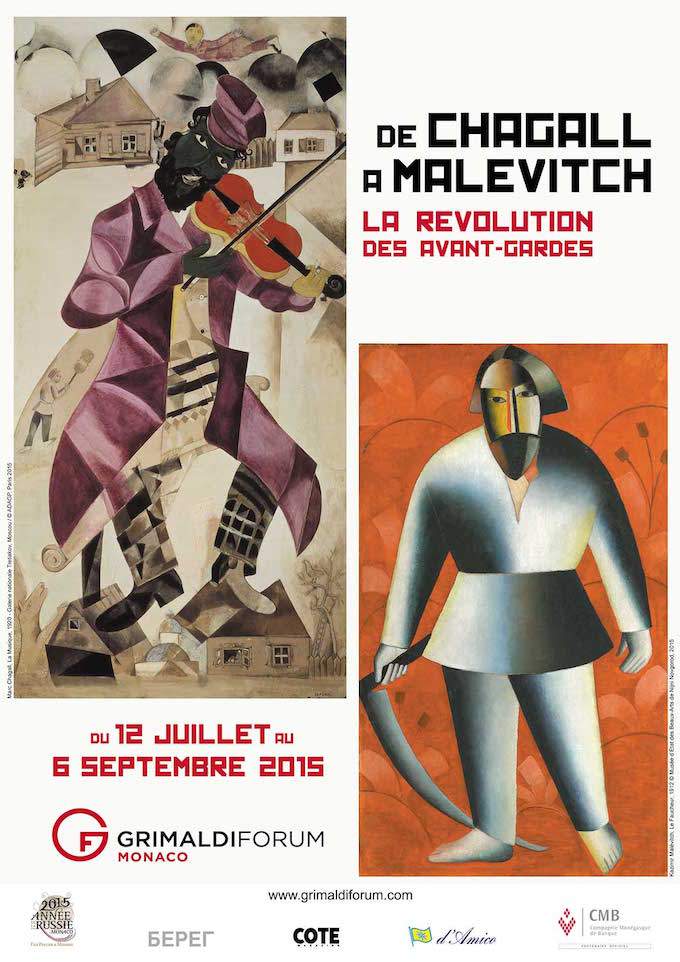 Altman, Baranoff-Rossin, Burliuk, Chagall, Chashnik, Dymchits-Tolstaya, Ender, Exter, Filonov, Gabo, Gavris, Goncharova, Kandinsky, Kliun, Klucis, Kudryashov, Larionov, Lebedev, Lentulov, Lissitzky, Mashkov, Malevich, Mansurov, Matiushin, Medunetsky, Mienkov, Morgunov, Pevsner, Popova, Puni, Rodchenko, Rozanova, Shevchenko Stenberg, Stepanova, Sterenberg, Strzeminski, Suetin, Tatlin, Udaltsova, Yakulov…. The list is impressive and in order to be able to offer such a programme, the exhibition curator Jean-Louis Prat, former honorary director of the Maeght Foundation in Saint-Paul de Vence, had to secure these works on loan from major Russian institutions such as the State Russian Museum in St. Petersburg, the Pushkin Museum and the Tretyakov State Gallery in Moscow, and also from some of the most famous European museums such as the George Pompidou Center in Paris.

As Prat himself says, “What makes [the exhibition] original is the presence of all the artists who lived through that dense and tragic epoch and the sensation of living, unceasingly, thanks to them, in discovery. They are all opposed and opposable. The title of the exhibition underlines the confrontation between two major artists of the 20th century: Chagall and Malevich. They lived during the same period, each with rich and contradictory styles. Tolerance is present in that unending “opening up” that is what all artists offer.”

He continues “The exhibition will cover 25 years of creation, from 1905 to 1930. I chose 1905 with the idea that with the first revolt by the St. Petersburg population, everything violently changed sides. The Empire was approaching its end, and the artists had already felt for many years that need to say things differently. I end the exhibition in 1930, the year of Mayakovsky’s suicide, the poet of all the avant-garde.”

A bilingual catalogue, richly illustrated and comprised of essays by specialists on avant-garde art has also been published for this unmissable event, which runs every day until the 6th of September from 10 am to 8 pm (10 pm on Thursdays) at the Grimaldi Forum. Admission is €10 (concessions available).