With no less than three exhibitions of his works taking place in the region, 2017 is definitely going to be the year of Pascal Pinaud.

The first two exhibitions are currently underway at the Fondation Maeght in Saint-Paul de Vence, and at the Espace de l’Art Concret in Mouans-Sartoux, both running until the 5th of March. The third one will take place this summer at the Fonds Régional d’Art Contemporain (FRAC PACA) in Marseille. Recognition indeed for one of the major artists of the Côte d’Azur of our time!

Born in Toulouse in 1964, Pascal Pinaud has been living and working in Nice for over 20 years, proving that after Yves Klein, César, and Arman, the South East of France remains a prime location for creativity and research in arts.

Having exhibited from early on in his career, the graduate of the Villa Arson is known for reinventing abstract painting in a quest for new directions, replacing frames and brushstrokes with technical originality and humour. Through his paintings, sculptures, photographs and installations, he likes to blend the history of our creative and transformative capacities with the origins of art, as well as questioning the possible future of his creations. He also brings a certain poetry to his works and likes to make the spectators experience “a thousand lives”. 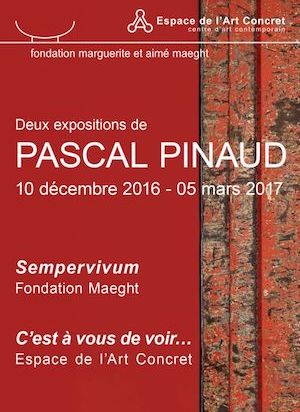 If his art bears some similarity to that of Gérard Gasiorowski, Bertrand Lavier, John Armleder, Noël Dolla, or with certain American painters from the 1980s such as Philip Taaffe or Jonathan Lasker, Pinaud has become one of the leading figures of post-modern painting. He has been granted solo exhibitions in numerous museums and art centres around the world, from the Museum Ludwig in Vienna and the Verrière Hermès in Brussels, to the Busan Biennal in South Korea and the Museo de Arte Contemporáneo in Santiago, Chile.

The retrospective exhibition at the Fondation Maeght “Sempervivum” retraces his practice through several series such as Tôles and Diptyques, but also presents some unique works such as Arbre à fèves and Tel Quel, while “C’est à vous de voir…” at the Espace de l’Art Concret offers an instropective look at his already long career.