Jerome Robbins was, quite simply, a genius, and absolutely unique. Regarded as the most successful American-born choreographer of his time, he was a dancer, director and choreographer who achieved equal acclaim for his contribution to the world of ballet – his greatest love – and to Broadway, for shows like On the Town and West Side Story (in collaboration with Leonard Bernstein whose centennial is also being celebrated this year), as well as Gypsy and Fiddler on the Roof. Robbins introduced Broadway to the ballet, and ballet to Broadway, and left the world of dance and musical theatre a vast and priceless legacy of highly imaginative works.

Mikhail Baryshnikov described Jerome Robbins as “…. an extraordinary man who changed the direction of twentieth-century musical theater …. a haunted perfectionist …. a charismatic and complex character”. Robbins was all of these, and also someone who was never really able to appreciate how great was his contribution to the combined realms of dance and musical theatre, or even to recognize the extent of his own genius.

The Robbins ballet which opens this Ballet Nice programme was originally called Concerto in G, then In G Major, but in France it became known simply as En Sol. Robbins choreographed this work for New York City Ballet’s Ravel Festival, held in the spring of 1975 to mark the 100th anniversary of the composer’s birth, and set it to Ravel’s gorgeous Piano Concerto in G, written in the late 1920s. The first and third movements of the ballet are chic, fun-in-the-sun, seaside sort of pieces – with more than a hint of Broadway about them – and between them is an elegant, romantic and simply beautiful pas de deux. It’s a work that Ballet Nice Méditerranée does particularly well, and demonstrates two of the many facets of Robbins’ creativity. 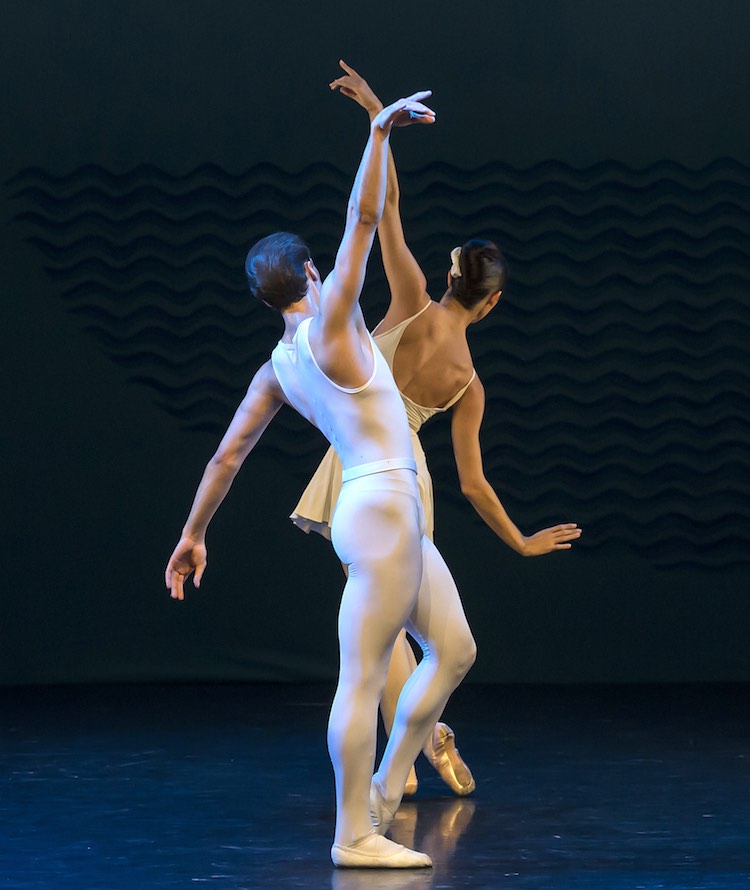 The next work is Oscar Araiz’s Petrouchka, a 1920s-style interpretation of the original burlesque ballet by Michel Fokine. The score – which contains snatches of Russian folk tunes – was composed by Igor Stravinsky, and the original version of the ballet was set against the colorful backdrop of the Shrovetide Festival in St Petersburg.

This version by Araiz has none of the fun of the fair about it, though. It’s a much darker, more dramatic work, relating the sad tale of the love triangle played out by three fairground puppets – the humble and unassuming Petrouchka, a ballerina who looks like the figurine in a musical box, and a somewhat sadistic lounge-lizard type character – all of whom come to life when the magician waves his wand. The ballerina leads Petrouchka on, then casts him aside in favor of his dashing rival. A duel ensues, Petrouchka dies, but his ghost comes back to haunt the magician, and to torment him for giving him life.

Oscar Araiz is equally well known for his contribution to both classical and contemporary dance, with a repertoire of original works and interpretations of classics such as La consagración de la primavera (The Right of Spring) and Romeo y Julieta (Romeo and Juliet). One of South America’s most highly regarded choreographers, he has held the position of Artistic Director at La Plata Argentine Theater Ballet, the San Martín Municipal Theater Contemporary Ballet, and the Colon Theater Ballet. Internationally, he served as artistic director of the Geneva Grand Theater Ballet and has worked with companies including the Royal Winnipeg Ballet, the Joffrey Ballet and the Paris Opéra.

Dwight Rhoden is the creator of the final work on the programme – Verse US – a dramatic piece with jazzy undertones, and an impressive display of movements in a bold, almost athletic style. Even the score is unusual – bringing together the music of Philip Glass and contemporary German composers Nils Frahm and Sven Helbig. Also included in the musical credits are Estonian-born American conductor, curator and producer Kristjan Järvi, and, in a nod to tradition, the score also features the work of Mozart, and Claude Debussy.

A former principal dancer with the Alvin Ailey Company, Rhoden has also performed with Les Ballet Jazz de Montreal, and is now the co-founder, and one of the two artistic directors of Complexions Contemporary Ballet in New York. Widely regarded as America’s original multicultural dance company, Complexions is known for its pioneering and innovative blend of methods, styles and cultures, and Rhoden – the resident choreographer – is credited with having created a completely new and thrilling form of dance. He is also one of 12 contemporary choreographers who has been invited to create a work for San Francisco Ballet this season, for the company’s Unbound Festival of New Works.

The Ballet Nice Méditerranée triple bill takes place from April 13th to 21st at Nice Opéra. Tickets may be bought online, or by calling 04 92 17 40 79.