The Russia in Monaco festival dominates the cultural scene in Monte-Carlo this May, with opera being the flavour of the month in Nice.

Included in the events in the Principality this May are performances by the St Petersburg State Symphony Orchestra ‘Klassika’ and the Monte-Carlo Philharmonic Orchestra.

The first concert is a performance of a symphonic version of Tchaikovsky’s opera Eugene Onegin by the St Petersburg State Symphony Orchestra ‘Klassika’. Founded in 1988 by Maestro Alexander Kantorov originally as a chamber ensemble – the ‘Klassika’ Orchestra was awarded the status of State Orchestra of St Petersburg in February 1992. Composed of graduates of the St Petersburg State Conservatory and prize winners of prestigious national and international music competitions, the orchestra features some of the finest musicians of the city.

The St Petersburg State Symphony Orchestra ‘Klassika’, accompanied by soloists of the Mariinsky Theatre – Svetlana Kiseleva and Vladimir Tzelebrovsky – plays Tchaikovsky’s Eugene Onegin at the Grimaldi Forum on Saturday 2nd May at 8.00 pm. For tickets call +377 99 99 30 00. 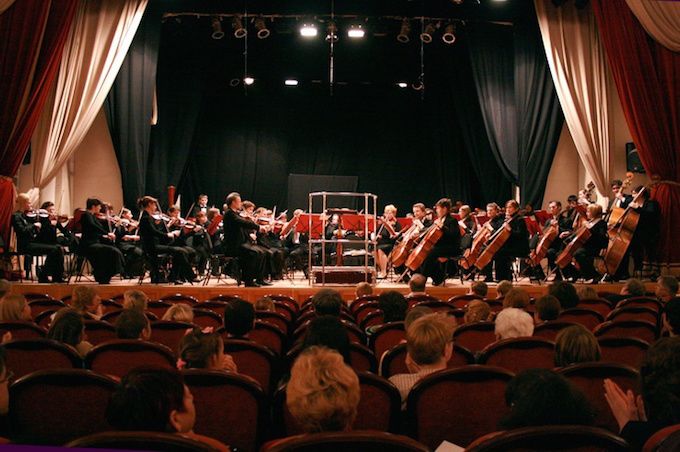 On Sunday, 3rd May, as part of its Grande Saison series, the Orchestre Philharmonique de Monte-Carlo presents a programme of music by Richard Strauss. The featured works are:

– The Four Interludes from his opera, Intermezzo – a bourgeois comedy with symphonic interludes

– The final scene from Capriccio – his final opera, subtitled ‘A Conversation Piece for Music’

– Three of his most beautiful songs – Morgen! (Tomorrow) – written as a wedding present to his wife – Die Nacht (the Night), and Zueignung (Devotion)

– The symphonic poem Death and Transfiguration – in which he portrays the final moments of the life of an artist.

The Monte-Carlo Philharmonic Orchestra will be conducted by Jeffrey Tate and the guest soloist is soprano Anne Schwanewilms, regarded as one of the finest German sopranos, and a Richard Strauss specialist.

The concert takes place on Sunday, 3rd May at 6.00 pm at the Auditorium Rainier III and tickets may be booked online. 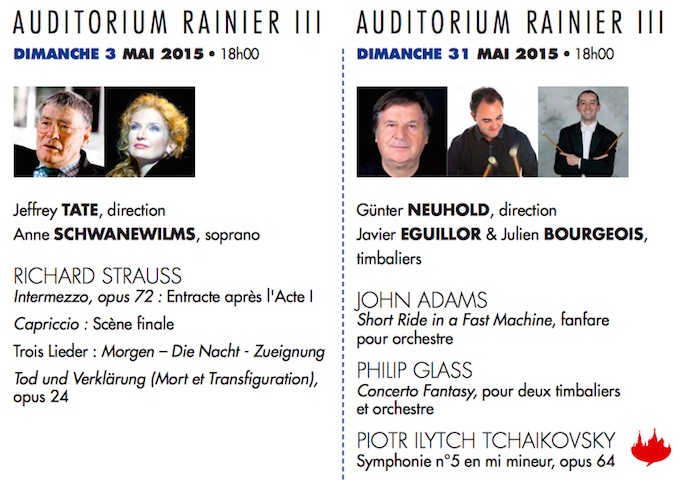 The second of three performances showcasing Russia in Monaco during the month of May, is a Happy Hour concert entitled Shostakovich Soirée, in which the Monte-Carlo Philharmonic Orchestra presents three works:

– Mendelssohn’s Octet for Strings Opus 20 – written in 1825, when the composer was only 16 years old. He described the octet as “my favourite of all my compositions”, adding ”I had a most wonderful time in the writing of it!”

– Shostakovich’s Two Pieces for String Octet – Prélude and Scherzo – which he wrote when he was a student at the Leningrad Conservatory, during which time when he was also composing his First Symphony.

– Reinhold Glière’s Octect for Strings, Opus 5, described by respected scholar and critic, Professor Sabaneiev, as “…. a fine work”, adding that “Glière’s melodies are full of feeling and emotion, fine sonority and noble harmony”.

The Shostakovich Soirée takes place on Thursday, 28th May, in the Auditorium Rainier III, at 6.30 pm. For tickets visit the OPMC website.

In the final Russian festival concert for May, Austrian conductor Günter Neuhold leads the Monte-Carlo Philharmonic Orchestra in a programme of music by American composers John Adams and Philip Glass, with the Russian touch provided by Tchaikovsky.

The Adams work, Short Ride in a Fast Machine, was commissioned by Michael Tilson Thomas, Music Director of the San Francisco Symphony. It featured on a CD recorded by the Symphony – which also included Adams’ Harmonielehre – and which won the 2013 Grammy® Award for Best Orchestral Performance, and the 2013 ECHO Klassik Award for Orchestra of the Year.

Philip Glass’ Concerto Fantasy for Two Timpanists and Orchestra was written in 2000 for timpanist Johnathan Haas’ performance at the concert The Anxiety of Influence: Music as Historical Legacy, performed on November 19, 2000, at Avery Fisher Hall at Lincoln Center, New York. In this performance, the guest artists are Javier Eguillor and Julien Bourgeois.

The final work of the concert is Tchaikovsky’s gorgeous Symphony No 5, one of his best loved works, but one about which the composer had his doubts – as he had with a number of his compositions. “I am dreadfully anxious to prove not only to others, but also to myself, that I am not yet played out as a composer. . . .” he wrote. “The beginning was difficult; now, however, inspiration seems to have come. . . . It seems to me that I have not blundered, that it has turned out well.”

This concert takes place on Sunday, 31st May, in the Auditorium Rainier III at 6.00 pm. For tickets visit the OPMC website.

The highlight of events in Nice this month is the production of Jacques Fromental-Hálevy’s grand opera La Juive (The Jewess) by the Opéra Nice Côte d’Azur. Set to an original French libretto by Eugène Scribe, it tells of an impossible love between a Christian and a Jewish woman. It was first performed at the Opéra, Paris, on 23 February 1835 and became one of the most popular and admired operas of the 19th century. La Juive also featured as the inaugural performance of the newly-constructed Palais Garnier in Paris on 5th January, 1875.

The production by Opéra de Nice stars Cristina Pasaroiu in the title role, Luca Lambardo as Eléazar – who found Rachel as an abandoned baby and raised her as his own – Thomas Paul as Léopold, who is in love with Rachel, and Hélène Le Corre as Léopold’s wife, Eudoxie. The Nice Philharmonic Orchestra and Chorus are conducted by Frédéric Chaslin.

Information on all the Nice Philharmonic concerts in May is available the Opéra de Nice website.

If you missed the recent performances by Ballet Nice de Méditerranée, there’s one more – at the Théâtre Anthéa in Antibes – on 23rd May as part of the hors les murs series.