Le Tout Vienne is currently under the spell of Irina Brook’s version of the famous Donizetti opera. And on May 8, le Tout Nice will be, too.

Since taking over the reins as director of the Théâtre National de Nice in September 2014, Irina Brook has unleashed a firework of creative shows and festivals, both as a director and a presenter. And just like any good firework, the final weeks of her first season are being rung in with an even bigger bang: Gaetano Donizetti’s opera Don Pasquale, which Irina is currently mounting at the Vienna State Opera, will be streamed live at the TNN on May 8 at 19.00 h – a highlight in the Niçois cultural calendar absolutely not to be missed.

First performed with great success in Paris in January 1843, Don Pasquale is generally regarded as the high point of the 19th century opera buffa tradition: The title hero, wealthy old bachelor Don Pasquale, wants a wife and an heir to cut his wayward nephew Ernesto out of his inheritance. He decides to marry beautiful Norina who in return is in love with Ernesto. The young couple is devastated and ask their friend doctor Malatesta to help them come up with a plan. Disguised as Malatesta’s sister, Norina marries Don Pasquale in a fake ceremony and then proceeds to turn his life upside down. After a series of hilarious hijinks, the plan finally works, and Don Pasquale allows Ernesto to marry Norina, stating that marriage is not suited for an old man such as himself. 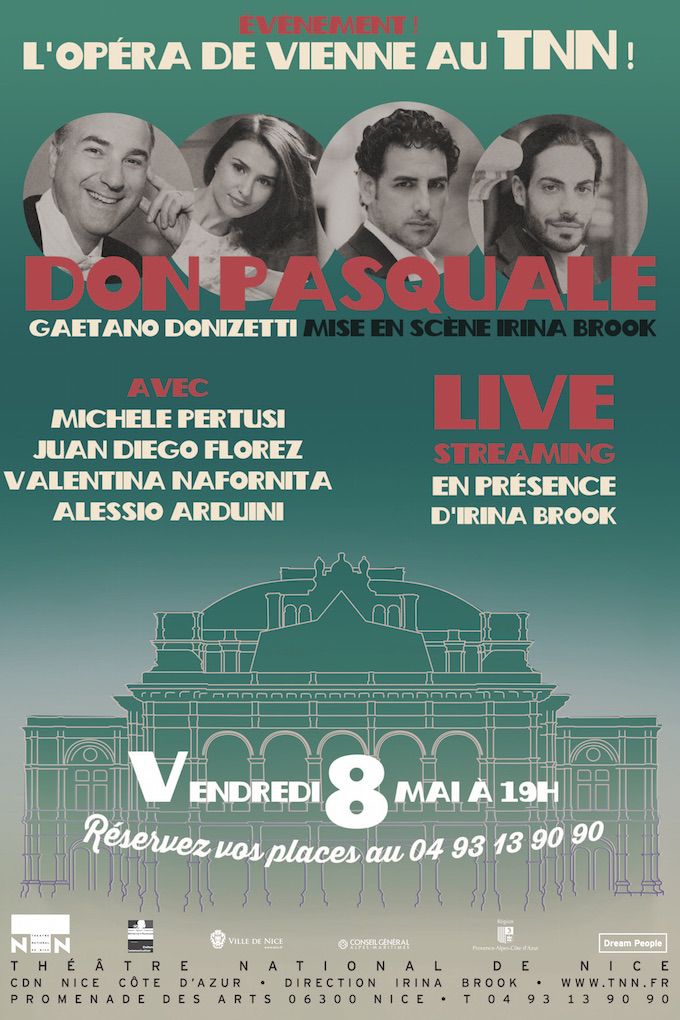 Supremely entertaining and a platform for the best singers and performers to showcase their talent, Don Pasquale is reminiscent of Italian commedia dell’arte, and comes to newfound life under Irina Brook’s capable direction after a 30 year hiatus in Vienna. But Irina wouldn’t be who she is if she didn’t repaint Donizetti’s oeuvre in her own colours. In fact, she doesn’t have to look far for real life inspiration. “Don Pasquale is as timeless a character today as he was in the 19th century – the wealthy old man who believes his money and influence can buy him the love of a beautiful young woman. You see that happening all around you, every day. In my version, the story is set in an erstwhile hot night club which had its hayday in the 1960s or 70s and hasn’t seen a broom since, and Don Pasquale is his ageing, over-the-hill director.”

That evokes memories of Peer Gynt, the Ibsen play that Irina gave a complete makeover, rock & roll style, and opened her first TNN season with. She is certainly not one to shy away from dusting off a classic chef oeuvre and Brookinizing it – she is the great Peter Brook’s daughter after all, reared on theater and opera from her earliest childhood… so, reinventing and directing comes completely natural to her. On her creative journey across stages around the globe she is frequently accompanied by trusted longtime collaborators who know and “get” her, like stage designer Noëlle Ginefri-Corbel and light engineer Arnaud Jung who both turn the venerable Vienna opera house into a shabby old dive.

Irina’s signature style is full of lightheartedness and poetry, there are quiet and reflective moments but also always a good dash of humour and sexiness…. A representation of herself in many ways. Her heroes are often colourful but ultimately fallible characters, her heroines strong women who soar above the patriarchic system by beating it with charm and wit. Just like she does. One of the things most important to Irina is to dispel the notion that opera – or stage art in general – is highbrow and inaccessible for the general public. “I want to show people that theater and opera is a place where they can have a good laugh…. at comic situations, at the absurdity of life, and at themselves, too.” 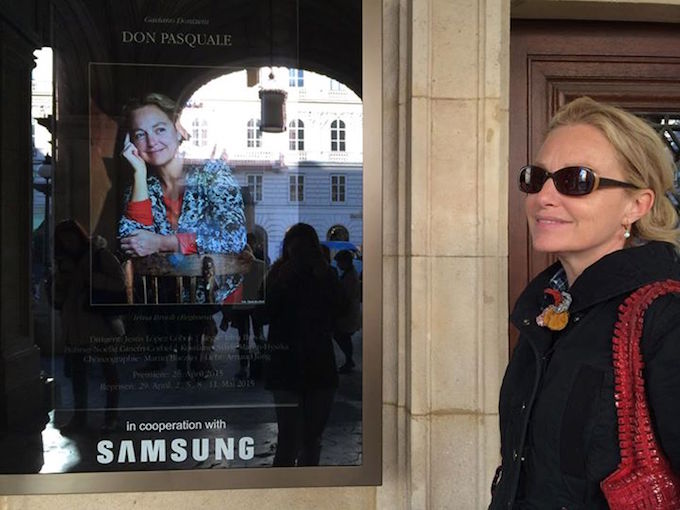 Yet, Irina won’t sacrifice great artistic skills. The lineup of musicians is certainly worthy of the Wiener Staatsoper, one of the world’s most prestigious opera houses. Spanish world class conductor Jesús López-Cobos leads an excitingly youthful cast through Donizetti’s masterful comedic score: Italian bass-baritone Michele Pertusi as the eponymous Don Pasquale has been a much-loved regular on international stages for over 20 years, mastering dramatic and comic roles alike, and the gorgeous and supremely talented young Moldovan soprano Valentina Naforniță delivers a touching performance as Norina. And about Peruvian bel canto tenor Juan Diego Florez who sings the part of Ernesto, renowned Austrian opera critic Heinrich Schramm-Schiessl said after the Vienna premiere on April 26, “The way he worked this role was sensational. Whether emotional outburst or sentimental piano, every note was perfect. With his phenomenal technique he knew how to place every crescendo, ever diminuendo exactly where it belonged….. He is rightfully considered peerless in his voice.”

Irina is thrilled: “To mount an opera at this historic House where so many of the legends of classical music have worked before, and to collaborate with such extraordinary performers, is very emotional and satisfying. And actually, Don Pasquale has a special connection to Vienna – this is where the theme gestated: Donizetti had spent a lot of time here before he returned to Paris and was commissioned to write this opera, so you’ll find subtle traces of influence of his time here.” And what does she think of her host city, we want to know? “Vienna is an extraordinary city at the crossroads of yesterday, today, and tomorrow – a very special place with a unique atmosphere. Such an incredibly rich cultural heritage… in a way, it was the New York of the 17th and 18th century.” Irina shares with us.

She is not a cultural snob but wants to entertain, make people laugh and have a good time, but she is also conscious that theater has an educational role, especially in these times when there is so much upheaval in the world. Typical for her though, she doesn’t like to lecture, she believes in a gentle approach instead of fingerwagging. Wherever she goes, people fall under her spell – public and critics alike. Citing Heinrich Schramm-Schiessl again, “… it was a success with the public, the kind of success the director had been hoping for. The public cheered, and especially of course Florez.” Irina returns the praise fullheartedly: “The public here is very well informed and sophisticated, a delight to work for. But I am also really thrilled to share this wonderful experience with the TNN audience when we project the opera live from Vienna on May 8. The Niçois welcomed me so warmly a year ago and have such an appreciation of of fresh, approachable interpretations that I am sure they will be as excited as I am. I would especially encourage those who have never seen an opera to come and experience for themselves what an amazing, enjoyable artistic journey it can be,” she says.

Although theater is her daytime job (well, and of most nights as well), Irina is by far not a newcomer to mounting operas: The Magic Flute for the Dutch Reisopera (co-directed with Dan Jemmett), and Eugene Onegin for the Aix-en-Provence Festival, followed by Cenerentola for the Theatre des Champs-Élysées, Paris, and the Teatro Communale, Bologna. She has also directed La Traviata in Bologna, which was co-produced by the Opéra de Lille, Last and Handel’s Giulio Cesare at the Théâtre des Champs-Élysées in 2014, the same year she staged another Donizetti oeuvre, L’Elisir d’Amore at the Deutsche Oper in Berlin. 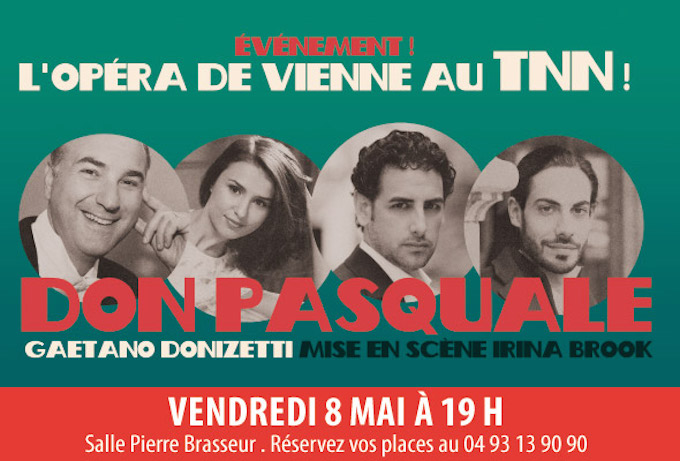 To see Irina’s Don Pasquale, book your tickets now for the one and only live transmission from the Vienna State Opera to the Théâtre National de Nice on Friday, May 8 at 19.00 h. Tickets cost €10 (concessions €5) and are available online, at the theater kiosk across from the TNN in the Promenade du Paillon, or at the desk in the main hall.

And while Vienna may have history, the famous State Opera, and Sachertorte, Nice has Irina Brook!