When Giuseppe Verdi’s opera La Traviata – The Fallen Woman – was first performed at the venerable Gran Teatro de Fenice in 1853, it caused a public outcry. Topics like prostitution or death were just not mainstream opera material. Today, they cause barely more than a raised eyebrow even in the most conservative circles, so reinterpreting the theme in a way that sparks interest is a fair challenge. But the adaptation that Pascale-Sabine Chevroton, one of Europe’s leading contemporary opera directors and choreographers, presents at the Opéra de Nice from November 11 through 17, is up to it: a finely balanced high wire act between fearlessly tackling the story from a modern perspective and paying homage to the genius of Giuseppe Verdi.

The reason why Pascale succeeds this precarious act is deeply rooted in her personal biography. Even though considerably less turbulent than that of her heroine Violetta, her own intriguing story speaks of strength, determination, courage, and wisdom. And those are the very qualities that she transposes onto La Traviata without losing the character’s innate vulnerability or the feminine touch that is inherently her own. 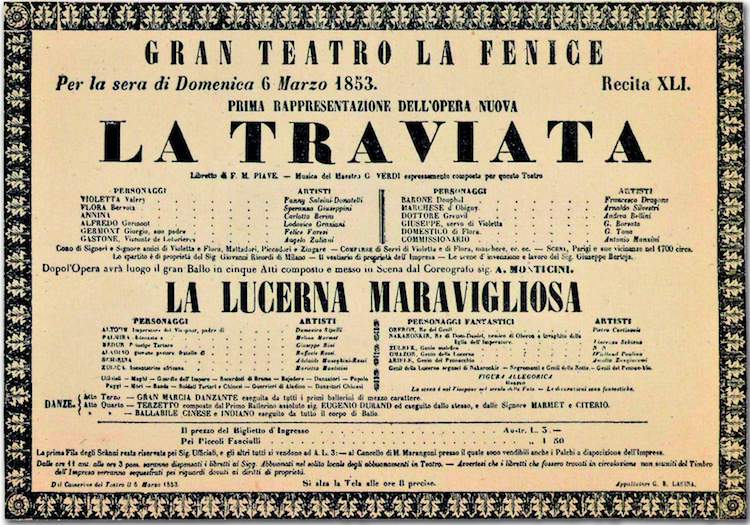 Pascale is one of the most accomplished French choreographers but you would have to cross the Rhine River to understand just how much she is loved and appreciated. Born in 1971 just outside the North-Eastern French city of Besançon, she is proud of her “village girl” roots. Her art-loving mother encouraged Pascale and her siblings to pursue creative endeavors from an early age on, and the seven-year girl old took up ballet dancing. There was no key experience but just going back and forth between her village and the “big city” where her dance school was located, stimulated Pascale to such an extent that she persistently declared she was going to be a dancer.

And she did indeed become one. After graduating from high school with honors at the tender age of 17, she enrolled in psychology studies but at the same time never lost track of her declared love for dance, and accepted a dance internship at Rheinische Musikschule in Cologne, Germany, one of the world’s foremost performing arts schools.

“It was a shock. Suddenly I found myself all alone in a foreign country as a teenager, and all for the love of dance,” Pascale tells us. Luckily she already spoke German at the time – and today masters the language of Goethe to absolute perfection. Her calm demeanor, reflection, and serenity do not betray the measure of the challenges she faced but her iron discipline quickly helped her overcome them….. her three week internship turned into three years of studies, adding piano, singing, tap dance, acrobatics, stage fencing, commedia dell’arte, and Indian kathakali to her skill set, all while continuing her psychology studies in France long distance.

Talent rises to the top quickly, and so it didn’t take long until Pascale made a name for herself. Her big break came in 1990, just after the German reunification, when she was hired as a soloist to Nordhausen, nestled deep in the Eastern German state of Thuringia, and soon thereafter also guesting in nearby Meiningen. Witnessing history unfold in front of her very eyes was a life-marker for the young French woman…. and also sharpened her perception. “I saw the transformation that was going on all around me but I also realized that former East Germany had actually had a decent quality of life prior to reunification. Especially cultural life had previously blossomed there… every small town had a theater, but so much of that simply disappeared. Capitalism was like a wave washing over the people, drowning many by taking away what had made sense to them,” she reminisces. 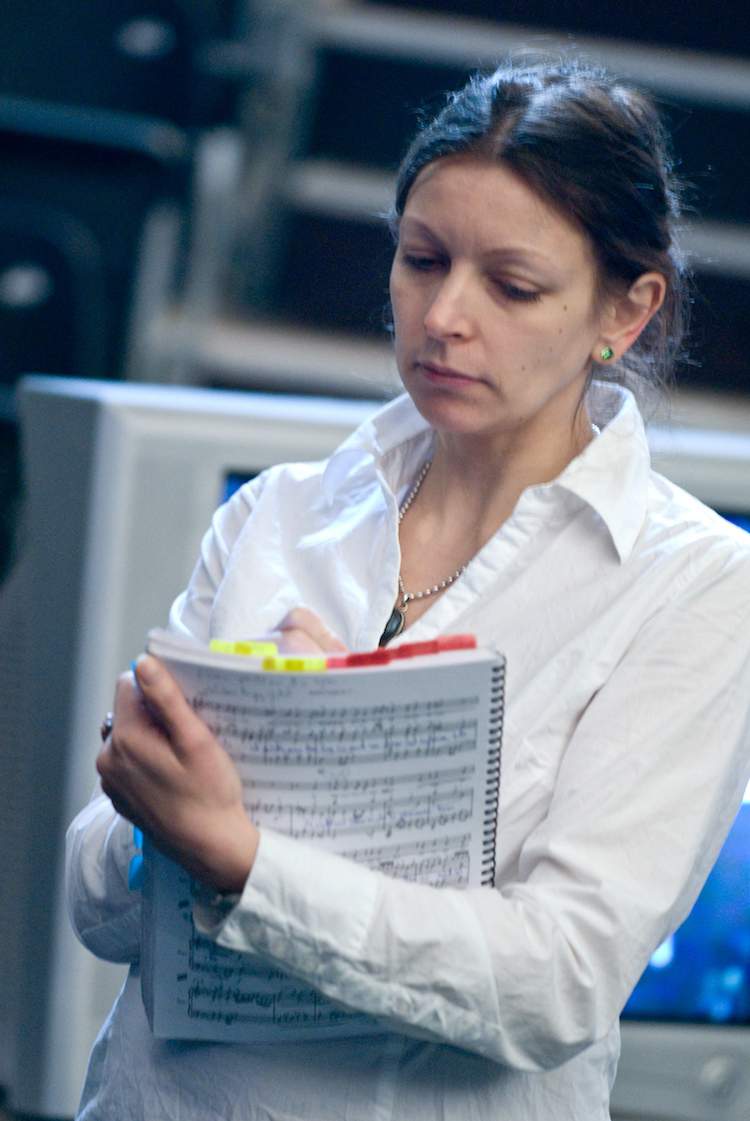 Despite all the early success she knew, and being in demand all across Germany, Austria, and Switzerland, Pascale started questioning her direction at age 24 and even considered going back to her academic roots in psychology, maybe doing art therapy.

Then fate intervened in the form of fellow artist Markus Kupferblum, a leading Austrian theatre and opera director who works all over Europe. He smelled Pascale’s tremendous potential and threw her head first into choreography, deaf to her protests that she didn’t know how to do that. Her 1998 première of “Der Gestiefelte Kater” (Puss in Boots) at the Vienna Volkstheater was not only a roaring success but also made her realize that not only could she could do it, but was in fact quite in her element. Gradually she tried her hand at operas, operettas, musicals and choir direction, and eventually presented her first own play under her direction, Jacques Offenbach’s popular opera bouffe “Pariser Leben” (Parisian Life). And she knew she had discovered what would become her new passion.

“I then understood that I had never really wanted to stop working, I just wanted to keep developing, and I was truly happy about the direction I had been pointed into,” she tells us about that transition from dancer to director and choreographer.

As productive as her Vienna tenure was, the conservative atmosphere prevalent in the city by the Danube River stifled her over time. When her French compatriot Marc Adam, then artistic director at the Luebeck Theater, called her to Berlin, she gladly followed. Berlin was a breath of fresh air, a city somewhere between tradition and avant-garde, between yesterday and tomorrow… lively, dynamic, and creative. Productions followed each other in rapid succession, branching out all across Europe….. hardly an œuvre of name and fame from Mozart and Strauss to Wagner, from Parisian cabaret to Broadway musicals and even a theatrical adaptation of a Madonna concert, that she wouldn’t joyfully tackle. Not even the 2008 birth of her son Baptiste could slow her down – he simply traveled along with his parents, adapting easily to his ever-changing environment. 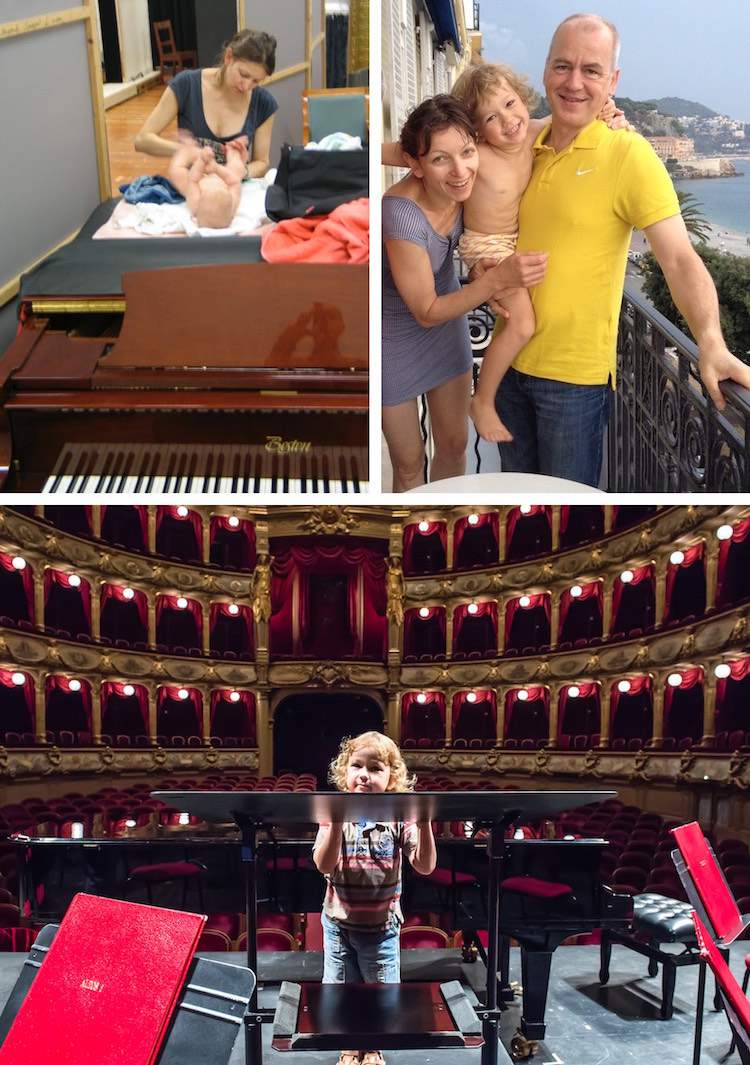 And then in 2011, another pivotal moment in Pascale’s life: mounting “Die Lustige Witwe” (The Merry Widow) in Montpellier – the first time she worked in her native country after having been gone for over 20 years. “I was a bit weary,” she admits. “Work mentality in Germanic countries is quite different. It is taken seriously there, it is a part of life, not an option. I like that. And an artistic director has a much bigger influence on the overall cultural landscape than in France.”

But her first play in France was a tremendous success. So much so that when Irina Brook, newly arrived at the Théâtre National de Nice in 2014, asked her to do the choreography for her signature piece Peer Gynt, Pascale accepted with delight. “It was an amazing experience working with this tremendously talented group of people from all over the world,” she remembers – and indeed, Pascale’s choreography of Shantala Shivalingappa’s solos or the trolls’ dance counted among the unforgettable highlights of the play. In a particularly busy 2014/15 season, one of the six highly lauded productions she also signed responsible for was the choreography for Benjamin Britton’s “Peter Grimes” (directed by Marc Adam) at the Opéra de Nice, delighting critics and the public alike.

Nice is therefore thrilled to find Pascale’s name back up on the Opera’s billboard, this time as director and choreographer of Giuseppe Verdi’s La Traviata. This particular production piqued her interest on many levels. For one, Nice’s cultural roots in nearby Italy, where Verdi’s opera takes place, brings with it an especially demanding and critical audience. “There are many traditionalists here who do not like it if these works are touched and adapted. On the other hand, there are the ones who expect that you reinvent the entire oeuvre from scratch. It is an interesting challenge to balance these conflicting interests. It is the duty, or even the obligation of a director to gently guide the audience toward new horizons without selling oneself out.”

La Traviata, based on Alexandre Dumas’ novel La Dame aux Camélias, tells the tragic story of young courtesan Violetta and her lover Alfredo. His father forces her to sacrifice her own hope of personal happiness for the sake of Alfredo’s reputation. Suffering from consumption, she lays dying as Alfredo rushes to her deathbed to ask her forgiveness… but too late.

Upon its premiere, the opera failed, hitting too close to home with the establishment. Although part of the social fabric, issues like hypocrisy, misogyny, libertine women, and death were simply not to be discussed. After several revisions, accommodating the public’s sensitivities, La Traviata finally did triumph, and critics noted that “those whose eyes remained dry listening to this music, do not have a heart in their chest.” 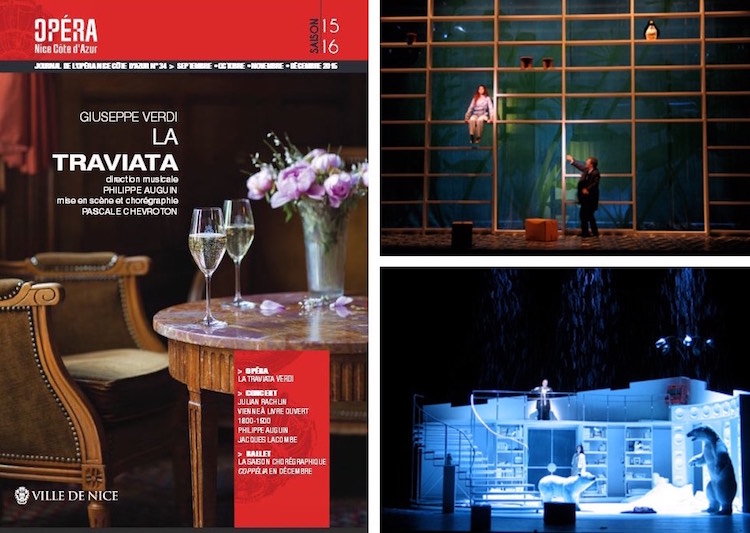 Pascale Chevroton is unafraid to take a sharp look at inconvenient or taboo issues. Among them sickness and death which she wants to raise awareness for. “People need validation and usually seek it in love. Violetta experiences it in her relationship but when that happiness shatters she reverts unto herself and learns to find love and acceptance within.”

The topic of death is important as well – but not as a final dramatic point to life. In fact, she taps into her own personal experience surrounding her father’s passing. “I want to show in the third act that death is not dramatic for the one who departs but the ones who stay behind. When my father was ready to leave this world, he hung on for as long as he could because we, his family, didn’t want him to go. But it is important to let them go when they are already elsewhere,” she philosophizes.
“And finally, my version of La Traviata is also a political statement about society which operates on a “you’re either one of us or not” principle, today as much as back in Verdi’s days.”

Critical and analytical statements from this young and positive woman, but possibly also influenced by her intensive research around Giuseppe Verdi’s personality. Pascale went to the composer’s house, Villa Verdi in Busseto, which he owned from 1848 to the end of his life in 1901 to get an intimate look at the man and his life, and she found he was quite the free spirit himself, living openly in an unmarried relationship with his lover Giuseppina Strepponi, never ingratiating himself with popular movements, and having a reputation as “full-time grumbler and reactionary critic“. In fact, many of his works were thinly veiled criticisms of contemporaneous leaders and customs.

This Verdian character profile certainly finds its way into Pascale Chevroton’s interpretation of the maestro’s opus. No light cultural fare there, but beautifully and gracefully retold in her elegant, downpared, dynamic signature style. “The one thing that matters most to me is to touch people, the get them to ask themselves questions. If I manage to do that, and if it’s just for a second, then I am happy,” she states. And this Traviata, which is incidentally also the last production under the reins of outgoing Opéra de Nice director Marc Adam, will not fail to do just that.

Tickets for La Traviata at Opéra de Nice cost from €40 and may be reserved online.